“Minister Lamola can you work eight hours everyday for 11 days without a rest?” 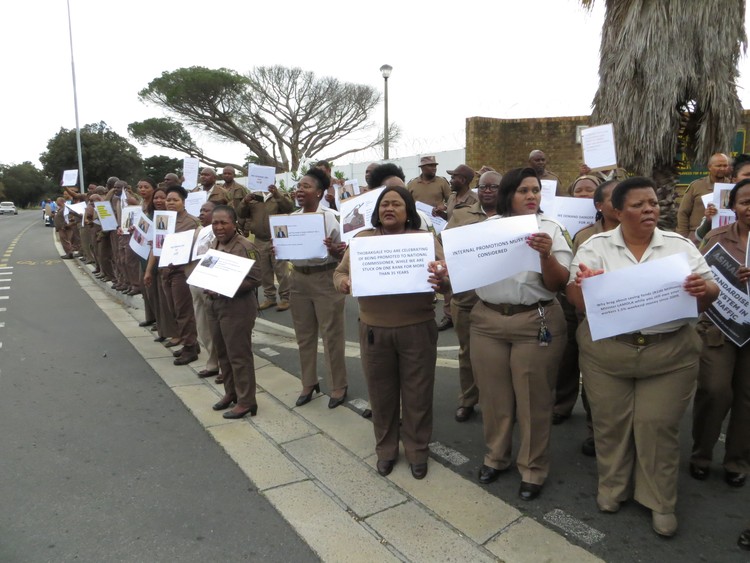 About 150 prison wardens stood shoulder-to-shoulder along the road outside Pollsmoor Prison in Tokai, Cape Town on Tuesday.

The workers, supported by the Police and Prisons Civil Rights Union (POPCRU), are demanding better wages and working conditions. Many held up placards which read: “Increase staff complement” and printed photos of Correctional Services Minister Ronald Lamola with the caption “Minister Lamola can you work eight hours everyday for 11 days without a rest?”

Conwe Flink, Western Cape provincial chairperson of POPCRU, said the wardens provide an essential service but were not being paid accordingly. The poor working conditions reported by the wardens included dirty drinking water at the facility. “Many of them experience stomach problems,” he said.

Flink said that workers want the department to “test and purify the contaminated water.” He said they also want more wardens to be hired to help deal with overcrowding and crime at the prison. They also took issue with a new shift system, from 2pm to 10pm, which was implemented two months ago. Flink said this leaves wardens exhausted. 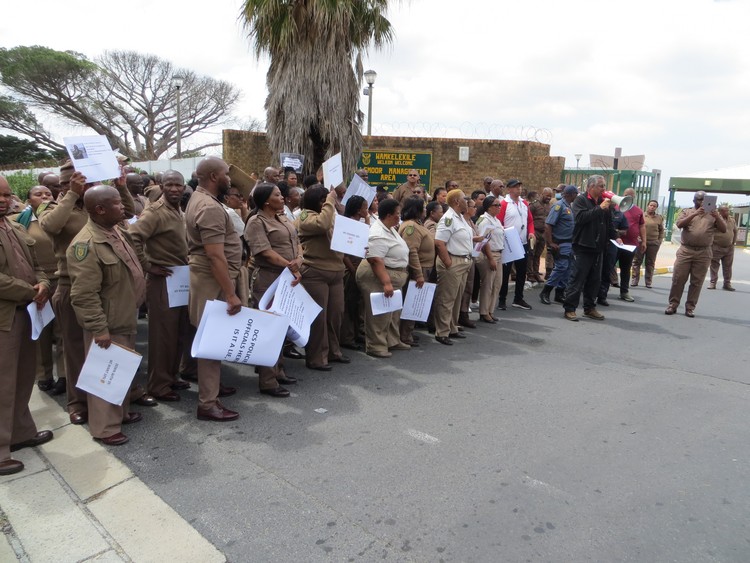 “They have to arrange private transport after the night shift. Each worker spends about R200 on transport. The new system places an extra financial burden on them because they have not received any increment in three years,” he said.

Flink said the workers are also demanding that a promotion policy be introduced to “motivate” prison warders. “Many of our members have been in the same rank for more than 20 years. It’s demoralising,” said Flink.

Pollsmoor’s Guilford Letaka received the memorandum and promised to respond within two weeks.

Ministry of Justice and Correctional Services spokesperson Chrispin Phiri said, “Minister Lamola and [Police] Minister Bheki Cele recently received a memo from the national POPCRU leadership early last month. I believe the contents of the [new] memo are materially the same. The Minister has fully appraised the issues and a response, on a way forward, is likely to be directed to the national leadership of the union.”

Previous:  Villagers have to dig for water because municipality fails to deliver

Wardens are lazy and spoiled

The majority of wardens are lazy, sit on their backsides and let the inmates who want to have a little bit of freedom do all their work for them. From court dates, making food, washing dishes, washing clothes, making tea and coffee, counting heads, controlling crowds etc. Then they ask for more, for doing what? Doing less for more money. 2pm to 10pm is a nice time to work. They're already too spoiled to complain about salaries, work time and transport.