Villagers have to dig for water because municipality fails to deliver 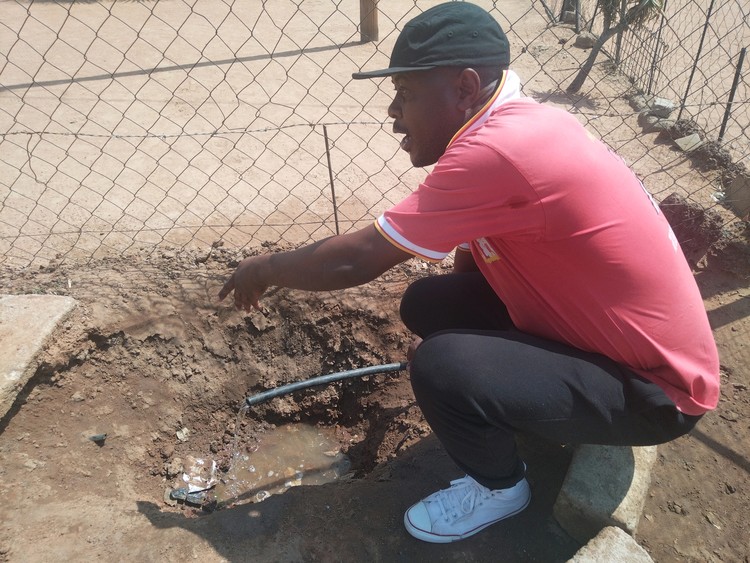 Resident of Mogogelo village in the North West, Masilo Modiba, says he and few other residents had to dig holes in order to access water through a pipe connected to the metres. Photo: Mosima Rafapa

Villagers in Mogogelo in the North West say they have resorted to digging holes next to their water metres in order to access some water intermittently.

In February 2020, we reported that the taps ran dry in the village over 12 years ago. The municipality said that it was working on a water project in Klipdrift to improve access. It was expected to be completed in February 2021 but was delayed due to lockdown.

In April 2021, we visited Mogogelo again and spoke to households in two wards who had to share one water tank during the height of the pandemic. At the time, the Department of Water and Sanitation said that the Moretele South Water Supply Bulk Pipeline project was 90% complete and that residents would receive water by July 2021.

This week, ward 26 committee member, Hlupi Golele, said water started flowing from their taps around June and July this year but did not reach taps in ward 11.

Resident Masilo Modiba in ward 11 said about a month ago, he and a group of residents went around the community, checking water valves to see if there was anything blocking the water from reaching their area. But no issues were detected, he said.

Some residents then dug holes next to their metres and after a while, the pipes started dripping. “Water comes out of the pipe but it doesn’t reach the taps. The only way to access the water is through the pipe that’s connected to the metre. Without digging, we won’t have access to water,” he said.

Modiba said many people still buy water from private tankers because water from the metre pipe was inconsistent. “When it works, it’s usually very early in the morning and again at night,” he said.

Tesia Modise also gets water through the pipe next to her water metre. “I have given up hope,” she said. “The water comes out sometimes but only because we have made means. Water trucks don’t come around anymore,” said Modise.

Ruth Masilo, 78, said she buys water from a private water tanker and their neighbour who had dug a well.

“I’ve been living here for decades. We struggle without water. As you can see, the taps are just decorations. A home without water is not complete,” said Masilo.

Masilo cares for her 79-year-old sister Nteba Tabane who is very frail, and she has to make sure that there is enough water for bathing, cooking and laundry. 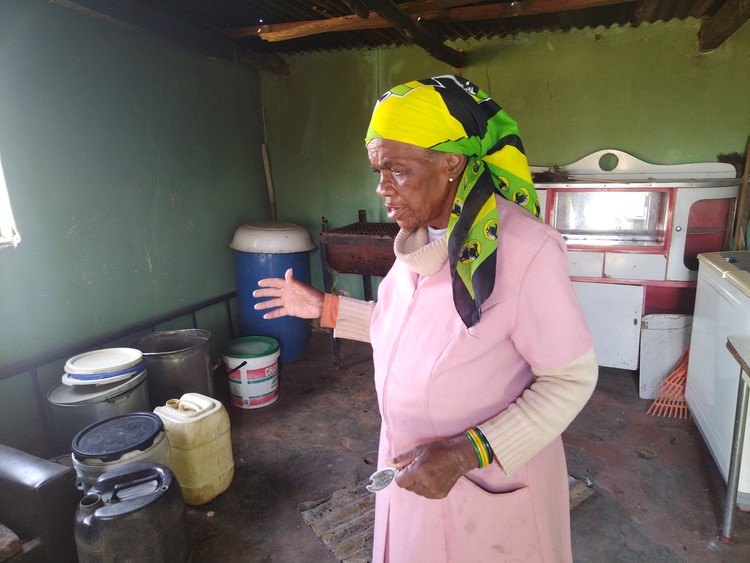 Ruth Masilo, 78, has to buy water from a private water tanker and their neighbour who had dug a well.

Ward 11 Councillor, Alfred Tlhabane (ANC), confirmed that municipal water trucks had not been to the village for three months. Tlhabane said he was told that there was a shortage of trucks and issues with the contract. “I have seen in some areas that water is coming out slowly. Let’s give it time,” said Tlhabane.

When we asked the Moretele Local Municipality about the truck shortage, spokesperson Mothupi Malebye did not respond but only said it is the responsibility of ward councillors to regularly report problems to the Director of Infrastructure Development.

Meanwhile, Sputnik Ratau, spokesperson for the Department of Water and Sanitation, said the bulk water project for the pipeline had finally been completed in February 2022. He said delays were due to “foreign objects found in the pipeline which were blocking the strainers”.

He said final work is underway and is expected to be completed this week.

Magalies Water is currently on a month-to-month contract with the municipality and is awaiting the signing of the Service Level Agreement. So at the moment, Mogogelo is only getting one million instead of three million litres per day.

He said the agreed quota of three million litres per day can only happen once the SLA has been signed.