Neighbour pays rent for family, saving them from eviction … for now 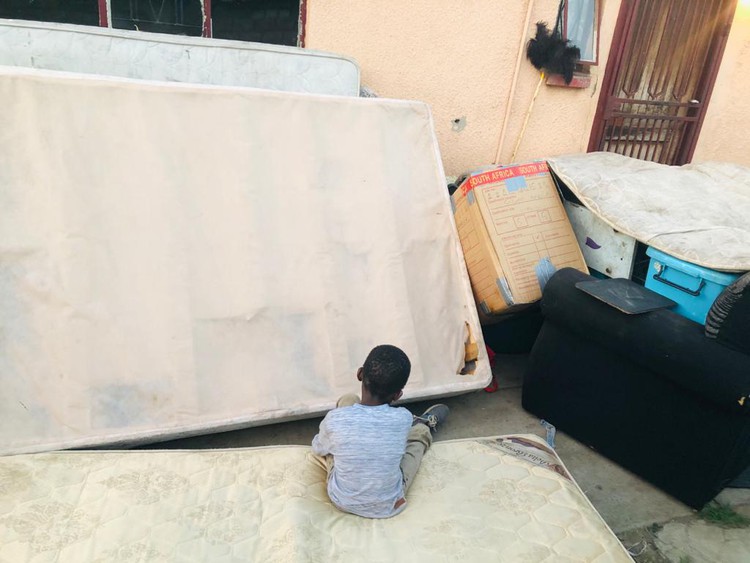 One of Paida and Meju Sakarombe’s four children sits on a mattress in the yard where the family spent several nights outside with their belongings. The family has since been allowed to move back into their home in KwaThema after a neighbour paid their rent for this month. Photo: Kimberly Mutandiro

A KwaThema township resident has saved a Zimbabwean family from being evicted this month after their landlord had already kicked them out with their belongings.

When we met the Sakarombe family on Friday, they were preparing to spend the fourth night outside with their belongings in their landlord’s yard. Despite being asked to leave, the family says they had nowhere to go and had to squat in the yard.

Later that night, after an altercation with the landlord, the couple and their four young children were allowed to move back into the home after a neighbour took pity on them and paid the rent they owed.

With no income, the family fears that they will find themselves in the same predicament next month.

Paida and Meju Sakarombe explained that life has been going downhill for them after they lost their jobs at the start of the Covid-19 lockdown in March last year. Paida was an accountant and Meju was a preschool teacher.

Relying on what they had saved so far, the couple and their children could no longer afford to live in their Orange Grove flat. Paida Sakarombe said they moved to cheaper accommodation in KwaThema.

He said they battled through the first few months with the little he made from doing odd jobs. But work has become scarce and the family have been unable to pay their rent. “Some days we go without food … Even if we got a place for R100, we would not be able to afford it. That is how bad life has become for us.

“We are glad that we were able to get help from a kindhearted person but we don’t know where we will get the next rent,” said Sakarombe.

Meju said that not being able to feed her family or pay rent “has been heartbreaking”. She said her children have been home since last year because they could not afford transport to their school in Orange Grove.

They have also not been able to find placement at government schools nearby.

“My husband and I have been looking for jobs but with no luck. How we managed to pay rent during the past few months has been a miracle. That meant we had no money left for food and school fees,” she said.

Meju said they even considered moving back to Zimbabwe but have no money to do so.

Their landlord Bafana Fafude said he too relied on the rent and could no longer afford to keep them as tenants if they did not pay.

“That family has struggled to pay rent ever since they moved in last year. I’ve given them countless (verbal) notices to leave. But they do not want to leave. Unfortunately l am no longer able to tolerate them,” he said.

According to Louise du Plessis from Lawyers for Human Rightsunder the current lockdown regulations, it is still unlawful for evictions to be executed. She said they have been swamped with requests during lockdown and advised the family to go to the Social Housing Tribunal for help.

Next:  “We cannot escape the smell”: Women have to clear away sewage before they can do their laundry

Previous:  No water in Qwaqwa villages since 2018