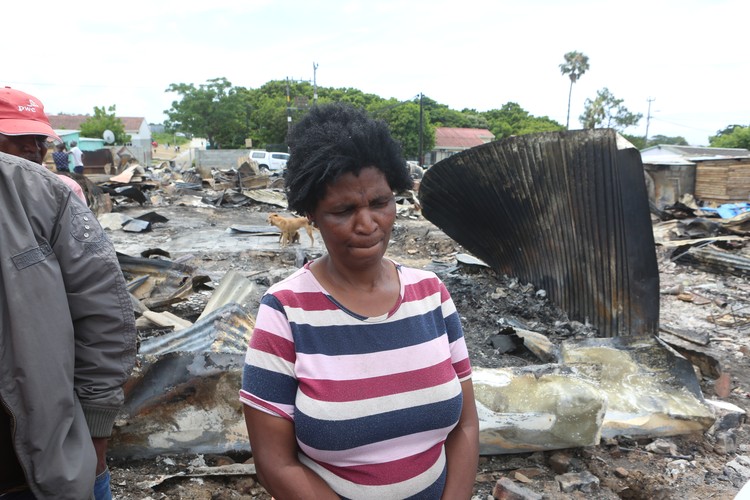 Nompumelelo Maqhulumane is among nearly 160 people living in a community hall since a fire destroyed 60 shacks and at least two RDP houses in Mzamomhle township in Buffalo City on Sunday morning. Photos: Johnnie Isaac

About 159 people are living in a community hall after a fire gutted 60 shacks and at least two RDP houses in Mzamomhle township in Buffalo City on Sunday morning.

Residents say the fire, which started before 10am, spread so quickly due to strong winds that most people were not able to salvage any of their belongings.

“I’m only left with the clothes I wore to work that morning. Everything else in the shack has been destroyed. I had couches, a wardrobe full of those clothes, a fridge, microwave, and TV but now I’m left with nothing,” said Mpinga Pitana, who rushed home from work after hearing about the fire.

Pitana has not been able to return to work.

Nompumelelo Maqhulumane, whose house is near the shacks, said they thought their homes would be fine, but the fire spread quickly. “It was just too hot. We just ran for safety,” said Maqhulumane.

Maqhulumane’s daughter Emihle and nephew, in grades 4 and 5 lost their uniforms and school items in the blaze. They have not been able to go to school.

Aviwe Sola was treated for burn wounds in hospital. “I heard an explosion, then realised that my clothes were burning. I was assisted by others to douse the fire before I was then taken by an ambulance to Frere Hospital. I was treated, bandaged and discharged hours later,” she said. 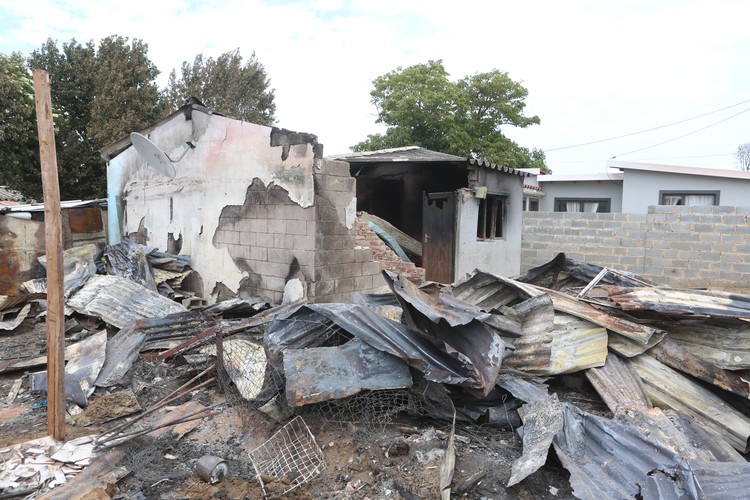 Nompumelelo Maqhulumane’s RDP house was gutted when the fire spread from the neighbouring shacks.

Mkhululi Sitonga lives with his four children but had gone away for the weekend. His eldest daughter was home when the fire started, and she only managed to grab one bag of clothes.

Gift of the Givers has been assisting the families living in the hall. Eastern Cape Coordinator, Corene Conradie, said they immediately sent 100 mattresses and blankets, hygiene items and baby essentials.

Conradie said they are providing two cooked meals per day since Sunday.

“Our team is distributing new clothes to them. We have a list of learners who need stationery and uniforms. We will buy shoes when they can go back to school.

“We are aware that it’s the last stretch of the year and we don’t want children to get discouraged. It’s a critical time for school children.”

Buffalo City Metro spokesperson Samkelo Ngwenya confirmed that the cause of the fire is still being investigated. Ngwenya said the metro would help arrange for SASSA and Home Affairs to assist those who lost IDs and social grant documents.

Next:  No water, no electricity: stroke survivor Sizwe Memela has had enough

Previous:  Dreams deferred for matriculants who can’t get IDs