The contract was terminated due to unsatisfactory progress a year ago 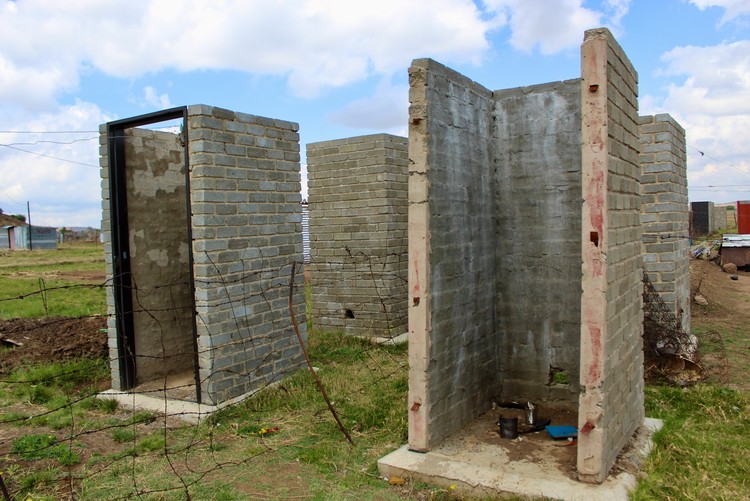 These toilets have been left unfinished. It’s more than two years since their construction started in Thaba ’Nchu, Free State. Photos: Yamkela Mopeli

Villagers in Thaba ’Nchu ward 39 use these zinc toilets they built themselves.

The contract was worth nearly R23-million and work started in May 2019.

But progress was slow, according to municipal spokesperson Qondile Khedama. He said the contractor struggled with cash flow.

By May 2021, the municipality had initiated a termination of contract, finalised on 15 October 2021. It had paid Makomota Stone R5.7-million. Khedama said that when the contractor left, sewer mains were 90% completed, water mains 94% and toilet structures only 64%. [It’s unclear how these percentages are calculated - editor.]

A year since the termination and over two years since construction began, the villagers sit without water or new toilets.

Trenches had been excavated and water pipes laid, but there are no taps and there is no water supply. Residents depend on water tanks. Last week, they said the tanks hadn’t been filled for 12 days. Water is also fetched from streams.

Only the walls of about 275 toilets have been built. Some people use zinc sheet-enclosed pit toilets they’ve dug themselves.

Lerato Poonyane, ward 39 community leader, said people use buckets and plastic bags in which to relieve themselves at night. She said children can be seen relieving themselves on the streets during the day. It has become normal as going into the bush is not considered safe.

Resident Tailor Mtemeki said they received their plots from the municipality in 2017. There were no services for the nearly 300 sites, but in 2018 they were promised water and sanitation.

“We got so excited when the contractors packed toilet material at each household, while the digging of water pipes in the streets was proceeding … Little did we know,” said Mtemeki.

Bricklayer Kgosiame Sebotsa worked for Makomota Stone. He said the workers sometimes waited two months for payment. He said they were never informed why the contractor left. They turned up one day to find the site deserted.

GroundUp tried several numbers listed for Makomoto Stone but they were all defunct.

He said they have since appointed a consultant, compiled a tender document for the outstanding work, and a tender will be advertised.