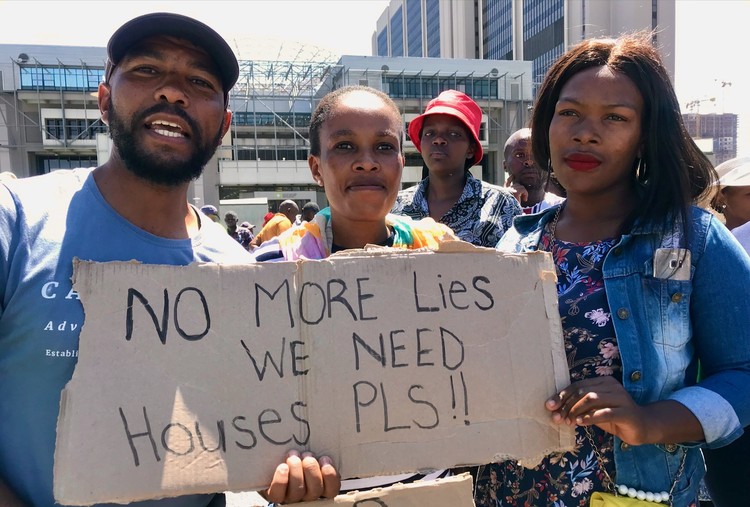 Andile Appolis (left) said, “You can go to Philippi where I stay and see the conditions we live in. I live with my wife, two children and two brothers in a small shack with no water and toilets. I am looking forward to relocation.” Photo: Tariro Washinyira

On Thursday about 60 residents living on the Metrorail Central Line at Siyahlala and Philippi informal settlements picketed at the Cape Town Civic Centre. They are frustrated by the long delays in their relocation to alternative land.

The relocation saga started in February 2021 when PRASA gave the shack dwellers ten days to vacate the railway line.

In September 2022, GroundUp reported that an agreement had been reached with PRASA, the City and the communities occupying the line. Minister of Transport Fikile Mbalula said the line would be restored by December 2022.

But no relocations have yet happened.

Meanwhile, the City and the Housing Development Agency (HDA) have blamed each other for the delays.

A memorandum addressed to the mayor and handed to City officials at Thursday’s protest states that the HDA had informed the occupiers that the City is the obstacle to their relocation.

In the memo, the communities said they are demanding that all government departments expedite the project and stop the blame game. They want the President to make it “a Cabinet Project” and the National Treasury to come in with money to help speed things up.

They demanded that the Intergovernmental Committee ensure that within 28 days: the HDA produce proof that it has secured land for the relocation and has started the formal application processes needed with the City’s planning department; the City has applied for funding from the national Department of Human Settlements for the relocation; and that the human settlements department approve a grant under the upgrading of informal settlements programme.

Resident Andile Appoli, holding a placard that read, “No more lies we need houses PLS”, said, “You can go to Philippi where I stay and see the conditions we live in. I live with my wife, two children and two brothers in a small shack with no water and toilets. I am looking forward to relocation because it means a better future for my family and children.”

In response to GroundUp the City said: “The City confirms receipt of a memorandum today and is studying its contents.”