An agreement has been signed with communities occupying the railway line 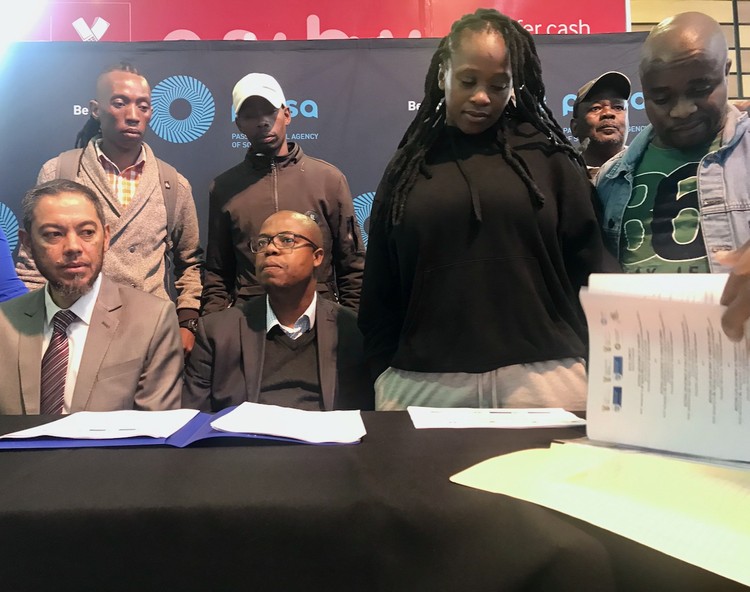 Acting PRASA CEO Hishaam Emeran and acting transport Director-General Ngwako Makapea (seated) with representatives of the railway occupiers at the signing of a “social compact” on Thursday. Photo: Tariro Washinyira

At Langa train station on Thursday, he addressed leaders from informal settlements located on the railway reserve in Langa, Philippi and Khayelitsha. This was at an event to sign an agreement for their relocation.

On 13 May, the communities had vowed not to move until Mbalula signed a “social compact” with plans and time frames for their relocation. This was because the Passenger Rail Agency of South Africa (PRASA) had previously made various commitments it never kept.

In a statement, PRASA said: “The objective of the social compact is to create mutual communication, collaboration and decision making.”

“The state must intervene and police must put its special forces to guard the tracks,” said Mbalula.

He said there were unspent funds and the new acting CEO Hishaam Emeran must “spend the money” to get the line open.

Philip Mnisi, from Philippi, said, “We want the trains to operate again … but as community leaders, we also have a duty to secure relocation places for our people.”

He said communities around the areas where PRASA intended to relocate the railway line occupiers were against them moving in. He blamed racial tensions between coloured and black people.

“We pray the minister will help to get the issue resolved. These people still have the apartheid mentality,” he said.

Housing Development Agency (HDA) regional manager Mbulelo Ncedana said they were still to consult with the receiving communities, which can only happen after the City of Cape Town consents to the development and completes internal processes and various public engagements.

“Langa railway occupiers will be moving to Philippi … We anticipate to conclude land procurement for the people of Philippi and Khayelitsha before the end of the year,” he said.

Once the busiest line, the Central Line was completely closed in October 2019. In February 2021, it started operating again but only a far as Langa. In July, a partial service restarted on the Pinelands to Bellville via Langa, Bontheuwel and Belhar.