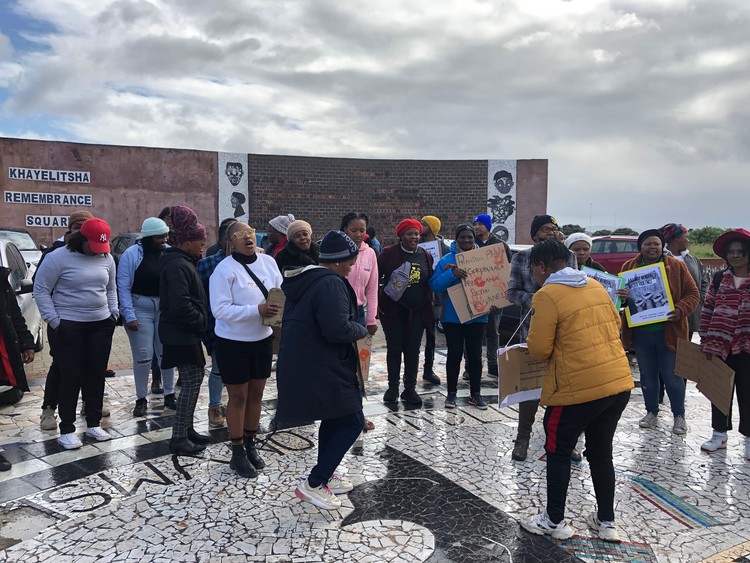 Members of Free Gender protest at Khayelitsha Remembrance Square outside the magistrate’s court after the case was postponed in September. Archive photo: Mary-Anne Gontsana

Family and friends of Phelokazi Mqathanya breathed a sigh of relief on Tuesday as the Khayelitsha Magistrates Court finally set a trial date for her murder case.

Mqathanya, who lived in Site C in Khayelitsha, was stabbed to death on 2 May 2021. She was lesbian and her family and activists believe her murder was a hate crime.

The accused, Bongani Ngadleka, was arrested soon after the murder. But after several delays in the investigations and four court postponements, the case was removed from the roll on 14 December 2021. The case was brought back to court on 5 May 2022 following action by Free Gender, a lesbian rights organisation.

Further postponements followed. On 13 October, the case was postponed because two of the prosecutors were not at court. This was the eleventh time the case had been postponed since the matter was brought back to the court in May.

On Tuesday, Ngadleka entered the dock briefly wearing black and gold sunglasses and a grey suit. Responding to questions from the magistrate, the state revealed that it intends to call four witnesses to testify during the trial. Ngadleka’s lawyer told the court that they have two witnesses. The lawyer said that Ngadleka has pleaded not guilty to the murder charge.

The matter was then set down for trial next year.

Soldaat said they were relieved that a trial date had finally been set. “Even though the trial is for next year, at least we are getting somewhere.”

Ndlwana told GroundUp that the fact that a trial date has now been scheduled has given some comfort and hope that there will be justice for her sister’s murder. This also means that the accused, Ngadleka, will remain behind bars during the festive season, she said.

The case was remanded to 18 January.