People on the street collect cans, plastic and wood to survive 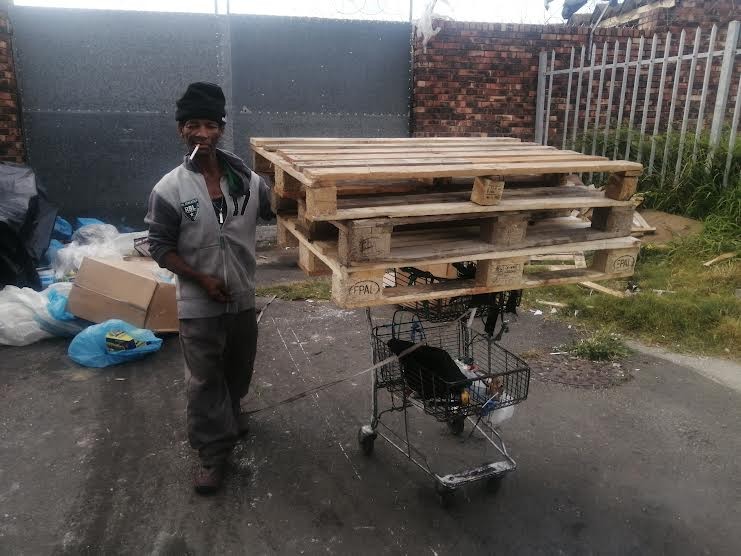 Joseph Stuurman is one of many homeless people who recycles wood, plastic and cans to survive. Photos: Mkhuseli Sizani

With South Africa’s economy staggering, and two in every five adults unemployed, “villages” of homeless people are springing up in South Africa’s cities as increasing numbers of people find themselves on the street. In our series on homelessness, GroundUp looks at how they are managing to get by.

Dorothy Titus, 34, lives in a toilet in a burned out toilet block in Sydenham, Gqeberha. She and three friends share the space.

The toilets Titus lives in were burned down earlier this year. Roofs and windows were completely gutted. There is a pile of rubble next to her room. The smell of excrement is unbearable. Inside her room, two fly catchers were already full and the room was buzzing the flies with no fresh air coming in.

Titus said she had been living there for five years. Her four-year-old daughter lives with her father and visits Titus during the day. “I do have piece jobs and whatever I get we share. We also collect cans, wooden pallets and cardboard boxes for recycling.”

“There is love and unity here because our problems are similar,” she said.

Shaun Oliphant, 37, also from Schauderville has been living in the toilets for three months. He looks neat and it’s hard to believe that he lives in such appalling living conditions. He said he had been in jail for assault from 2011 to 2014. “Where I come from violence and drug abuse are rife. Living in these toilets has taught me to be independent and to be in control of my life. I don’t want to go back to jail.”

“Yes, nobody believes that I am homeless because I dress nicely and I make sure that I look clean. Amongst the homeless people, you find drug addicts, criminals and people who just want to make a living. In our group we live a clean life. I do the recycling and also get piece jobs from the nearby companies,” he said.

Oliphant said they would like the state to provide them with training. “We have various skills and we don’t want to live like this forever. Prisoners are empowered with skills. The same should be done for homeless people,” he said. 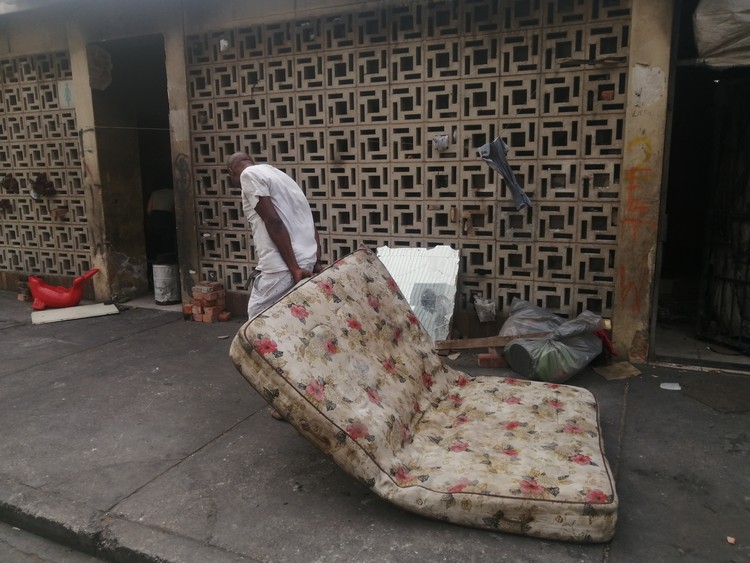 Shantel Simons was busy making fire on imbawula (a makeshift heater) in order to cook dinner.

“It’s been 10 months living in these toilets because I lost my job as a shop assistant. The shop owner had to let me go because of Covid his shop could not recover. I was renting a flat in Arcadia and could not afford to pay it.

“My friends invited me to come and stay with them in these toilets. So far life has been good because I am no longer stressed about money to rent a flat.” She said she makes R60 a day on average from recycling. “Even if I don’t have food to eat my friends share with me. We cook one big pot using imbawula. We break the damaged pallets to make fire,” she said.

Lesley Barnard, 52, has been living next to the lake for seven years with his wife. He says municipal law enforcement agencies have been harassing him and eight other homeless people.

“After I lost my job I came here with my wife and lived in my red bakkie. I have been surviving by fishing here in the lake.”

He says he used to catch enough fish to sell but after he lost his bakkie he has no transport to deliver fish. Now he just fishes to survive.

He says the municipality is harassing them.

“From April 2021 until February this year the municipality has broken down my tent five times. They say we are making the lake very dirty. But I tell them that I am here to make a living because the last time I had a permanent job was in 2014.”

He says the municipality has told him to apply for an RDP house but “there is no way I can go and stay in Joe Slovo township where development is taking place”.

“Being white is my first challenge and I will be too far from the lake.” 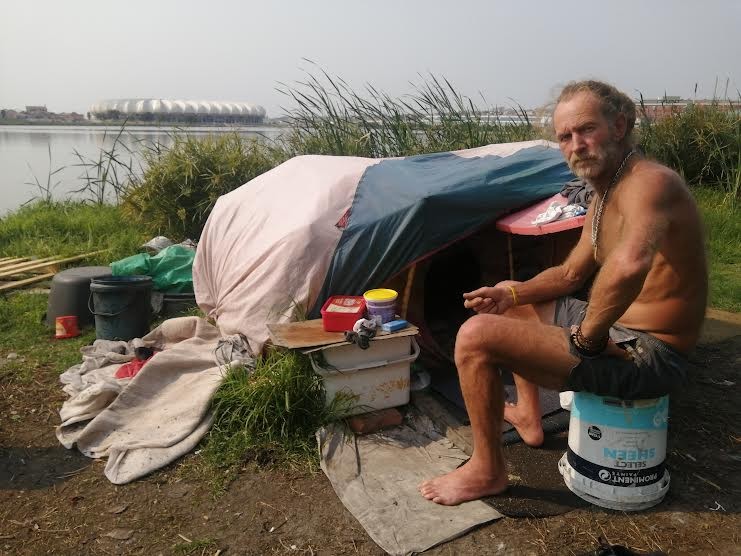 “The municipality has broken down my tent five times,” says Lesley Barnard.

Luphumlo Klaas, 43, known to his friends as Cool J, matriculated and was a forklift driver. He dresses smartly and carries a sling bag and smartphone.

He said he had been living under Grahamstown Road Bridge for two years. “I used to live at KwaDwesi but I was addicted to gambling. My step dad kicked me out of his house because I could not even buy the groceries.

“Then I decided to come and live under this bridge in order to be closer to my work place and also to cut the expensive transport expenses. Unfortunately in December 2021 I lost my job due to Covid because the company was not doing well.”

Klaas said there are 20 other homeless people who live under this bridge. “We have elderly and disabled people who live here. Some are women and children who have a drug problem.”

“I wake up early in the morning and ask for jobs from nearby companies. If I don’t get a job I collect plastic, pallets, and cans for recycling. The first thing I do with the money is buy instant porridge which I will eat with my 3-month pregnant girlfriend as breakfast and supper.

“I do have a cellphone and I always give my contact details in order to be called when there is a job in nearby companies. During the week and on weekends after I have done my hustling I go to the nearby church where members donate clothes to me. I like to dress nicely because a good image is very important when you look for a job,” he said. 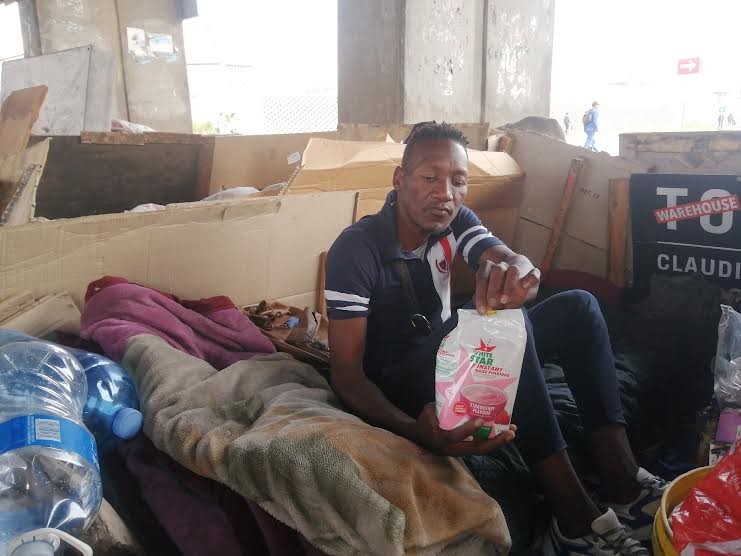 Luphumlo Klaas, known to his friends as Cool J, eats instant porridge for breakfast and supper.

Mahlubandile Mhlekwa, 44, from Qonce lives with two of his friends in the bushes next to the N2 in Young Park. He has been there for three years. “Every day I wake up and look for scrap metals and cans for recycling. I usually make R90 a day. The first thing I do is to buy food for R50. Then with the R40 I buy drugs to smoke because I don’t want to think too much.

“I chose to live here because I want peace. Living with my relatives in New Brighton township caused me depression. After the mother of my children died life has not been easy. I have worked at various companies. I worked for five years at Sasko and due to depression I resigned in 2016.”

His friend Andile Matsha, 18, from KwaZakhele, has been in the bushes for a year. “I have been living with my aunt since the age of three because both my parents passed on. While doing grade 11 my cousin also passed on. Then my aunt had to take care of my late cousin’s two children. My aunt told me that she could no longer support me financially.

” I decided to come here and collect scrap metal to sell because I don’t want to commit crime and end up in jail. Since I have moved here I am able to buy myself clothes and food. I also feel safe because these men treat me as their younger brother,” he said. 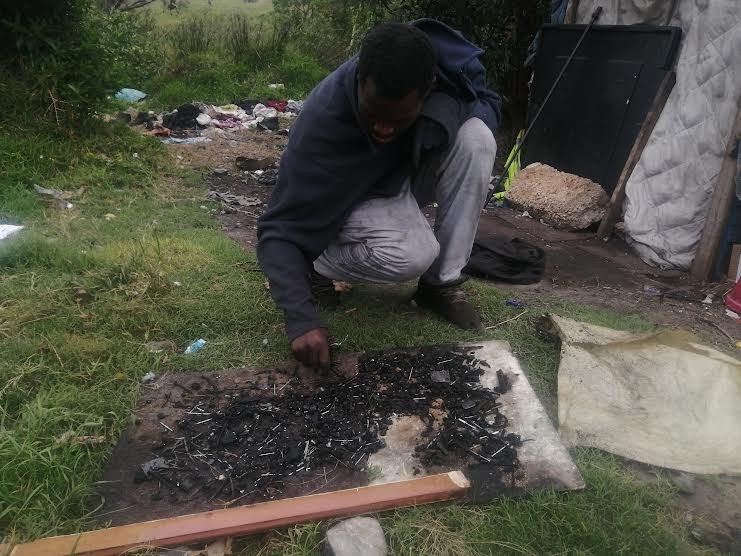 Mahlubandile Mhlekwa collects scrap metal and other items for recycling.

Joseph Stuurman, 56, from Windvogel sleeps opposite a municipal building in Kensington.

He too survives by collecting pallets, plastic, cardboxes and cans for recycling. He said he has been living with HIV since 2009 and is a former gangster who spent some time in jail.

“I have been sleeping here since 2019. Everyday I wake up at 4am and collect pallets from the company next door and from nearby companies and sell them for R10 to people who want to build their shacks.” He gets 30c a kilo for plastic and 70c for cardboard.

“On a good day I make R120 with this money I buy myself food. Sometimes I save it and give it to my son for lunch when I visit him at his home,” Stuurman said.

Sinethemba Nyepha, 32, from Zwide sleeps with 17 other homeless people outside the Culcatta shop in Showgrounds. When GroundUp visited at 4pm all his friends were asleep.

“I have been homeless for seven years. My parents died while I was in prison in 2012. When I was released, life was tough and the community did not accept me.

“I had to find a new home and a better way in order to survive. The owner of this place has no problem about us sleeping here because he knows his shop is safe when we are here.”

He said his day starts at 4am.

“I go door to door and ask for food. Sometimes I look for food in municipal refuse bags.” He also goes to the nearby taxi rank and offers to wash taxis in return for money. 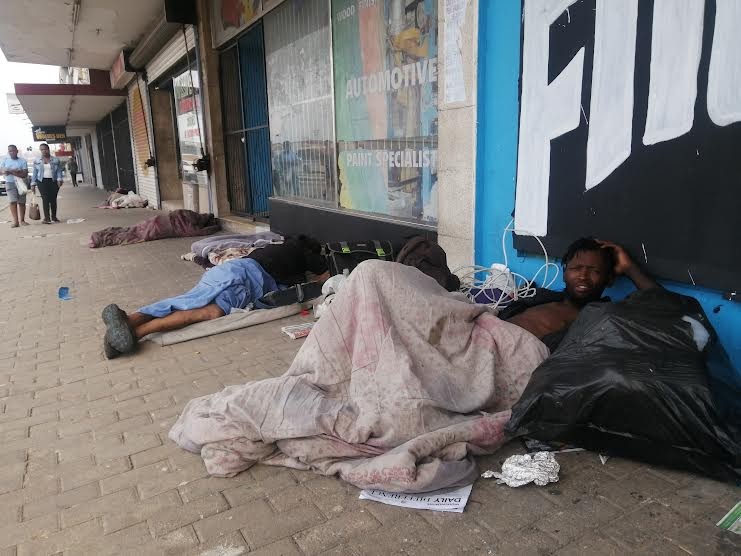 Sinethemba Nyepha says the owner of the shop where he and others sleep knows that the shop is safe thanks to their presence.

Kobus Killian and his wife Angelique have been married for eight years. They have been living near Algoa Park shopping centre for two years. Their three children are living in a children’s home because they cannot afford care.

“This life is very tough because every day I have to dismantle my tent in fear of thieves and the municipality. Then I have to hide it while I am busy scratching for food for my wife. We don’t even have IDs because they were stolen.”

“There is no privacy here,” said Angelique Killian. “I live for many days without a shower. Once a while I ask my friends to let me in and shower at their homes.”

“The rainy days are the most difficult ones because these tents are leaking. If we want to shelter in nearby shops the security guards chase us away.”

Municipal spokesperson Mamela Ndamase first promised to respond to GroundUp’s questions. But after several days she said we should direct our questions to Social Development. We contacted provincial Social Development spokesperson Mzukisi Solani, who promised to send our questions to the regional office, but did not contact us again or respond to our messages. 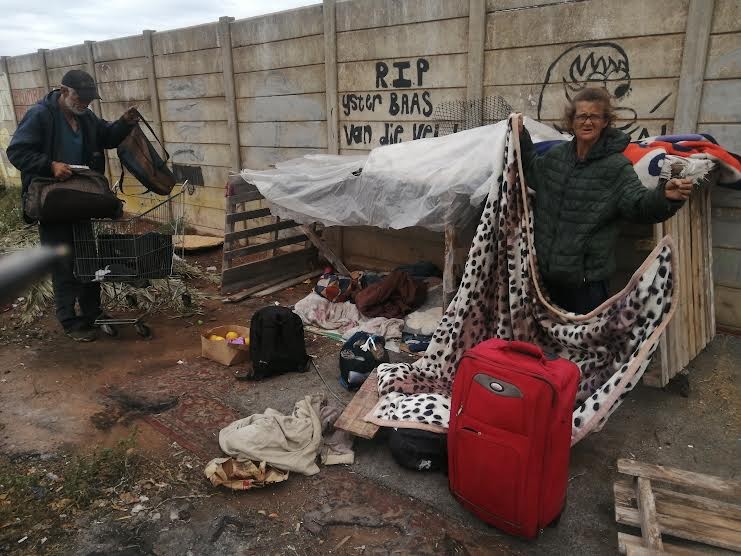 Kobus Killian and his wife Angelique have been living near Algoa Park shopping centre for two years.

Previous:  “This place is full of rats” says homeless man from District Six