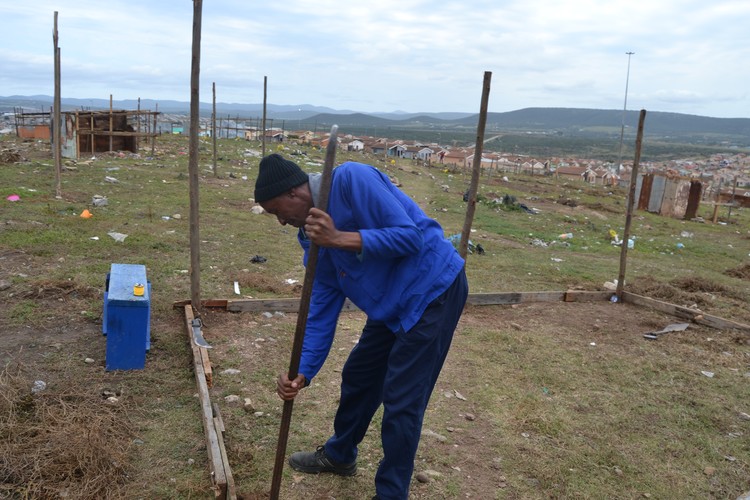 Melumzi Kona is among scores of people who occupied vacant land in KwaNobuhle, Kariega in the Eastern Cape. They claim the municipality has not built anything on the land in over 20 years. Photo: Thamsanqa Mbovane

The Nelson Mandela Bay Municipality says it has plans to remove a group of people who have erected about 20 shacks on land in KwaNobuhle, Kariega in the Eastern Cape.

On Monday, more people were marking out spaces for another 50 shacks to be built on the land. Occupiers, who have been living on the land for the last four weeks, told GroundUp that they will not move until the government gives them housing.

In August 2018, we first reported that about 100 people, who had been renting space in RDP houses and backyard shacks, moved onto the land.

Community leader and occupier Melumzi Kona said they had been told then that the land would be used for a school and a clinic. But four years later, he said, the land is still vacant, while surrounding townships and informal settlements continue to mushroom.

“The municipality has built nothing on this land for over two decades. It remains vacant, and sometimes dead bodies are dumped here. So we will keep the land for now.” Kona said he moved onto the land with his family because he no longer wanted to live in a relative’s backyard.

Angcwele Jack, a mother of five boys, aged between 18 and three, said she struggled to make the R700 monthly rent payment.

Ward 46 Councillor Ntobeko Nqakula said that he had arranged a meeting with the City’s human settlements officials who informed the community that the occupation is unlawful. Two weeks ago the municipality demolished some structures but those were rebuilt soon after, he said.

Occupier, Xolisa Mpushe, said municipal officials had warned them of the risks of erecting their homes on the land unlawfully.

“They threatened to evict us soon. We told them we had registered on the municipal housing database since the late 90s for RDP houses, but we were never contacted,” he said.

Municipal spokesperson Mthubanzi Mniki said there are 156 informal settlements currently being formalised with the provision of water and sanitation and electricity.

Next:  Climate protesters cover themselves in fake blood and oil

Previous:  Changing the way a town views its car guards