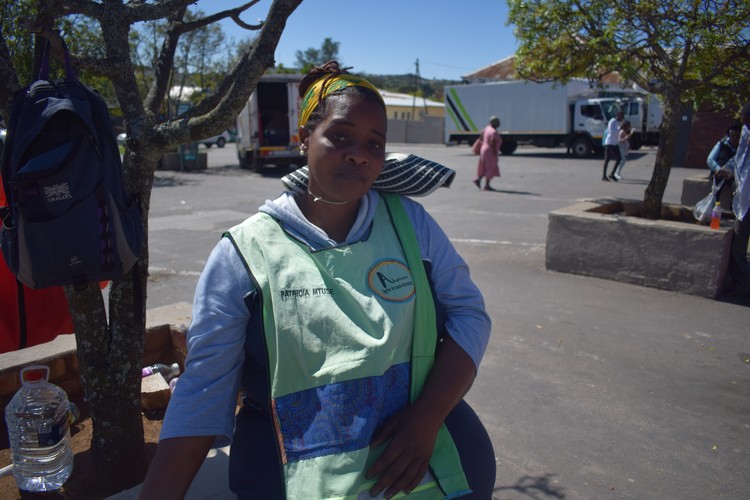 Patricia Mtuse has been a car guard for nearly 25 years and currently works outside Checkers in Makhanda, Eastern Cape. She is one of about 50 car guards who are members of the Abakhuseli Skills for Life project. Photos: Lucas Nowicki

Patricia Mtuse has been a car guard for nearly 25 years and currently works outside Checkers in Makhanda.

Mtuse is one of about 50 car guards across the town who are part of the Abakhuseli Skills for Life project which was officially launched in Makhanda earlier this year. The project trains and assists car guards.

Abakhuseli, which means ‘The Protectors’, started in response to the hard lockdown in March 2020 which prevented car guards like Mtuse from working.

“I liked being a car guard because it provided for me directly,” said Mtuse. She supports her son, who is currently in grade 2 at Fikizolo Primary in Makhanda. She works six days a week, from 7:30am to 5pm and earns an average of R700 a week.

Mtuse said that Abukhuseli has also “helped people understand us [car-guards]”. She said their uniforms and name tags have helped to build trust with residents.

The Makhanda Circle of Unity — civil society coalition that led the local response to Covid — started giving food parcels to about 120 car guards during the lockdown.

“We thought the car guards would struggle because their only [means] of living is to be here on the streets,” said Likhaya Msutwana, Managing Director of Abukhhuseli, who also works as a caretaker for the local municipality.

In November 2020, Msutwana, and two other facilitators, Dinah Eppel and Lilly Quin, decided that they wanted to do more. They found that car guards in the town support between three to eight dependants. “We wanted to empower them, give them life skills and all sorts of things to empower them to focus more on themselves,” said Msutwana. 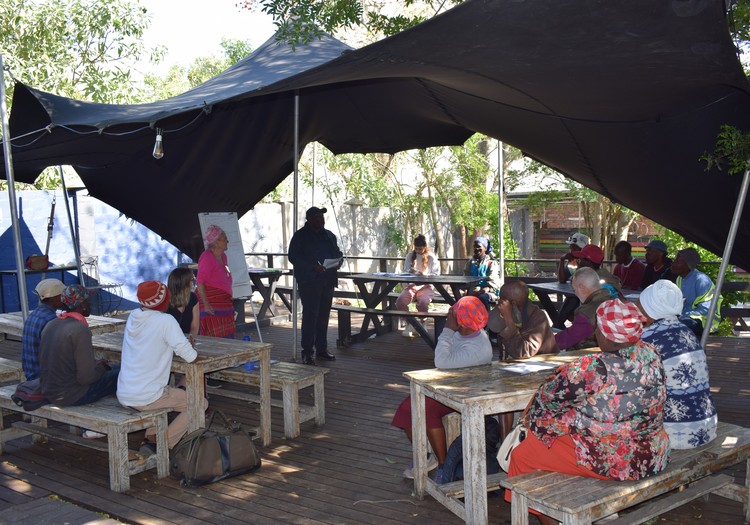 Abakhuseli hosts bi-weekly meetings in New Street. During the meetings members brainstorm ways to improve life and their work.

Abakhuseli started hosting bi-weekly meetings in March 2021. An events venue in New Street provides the space. During the meetings members discuss ways to improve life and their work. This includes bringing traffic officers to help teach them hand signals. They also work with businesses and civil society organisations across Makhanda.

The project is open to all car guards but due to lack of funding is not able to offer stipends beyond the provision of life skills training and uniforms.

Msutwana said one of their biggest challenges has been the negative responses of some community members towards the Abakhuseli participants.

However, Mtuse said car guards in Makhanda “are suffering because business is quiet” and “many people now only use credit cards” so she earns less money than she used to. She hopes that Abakhuseli can help them find a way to resolve some of these issues.

Abakhuseli Skills for Life project is in the process of registering itself as a Non-Profit Organisation. Msutwana said, “Some car guards in the group want to be musicians, plumbers and electricians. We are hoping that as we keep on having these workshops, it will help them in the long run. Not only in terms of car guarding, but to give them a skill.”

Next:  Kariega families refuse to move from municipal land