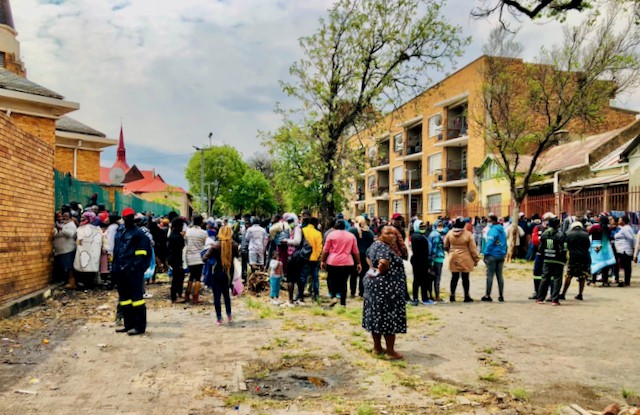 Hundreds of immigrants were denied food parcels on Friday in Johannesburg despite being registered on the list approved by the Gauteng government, according to the organiser of Zimbabwe Isolated Women in South Africa. Photo: Kimberly Mutandiro

But in a chaotic distribution at Jeppestown on Friday, about 400 immigrants were turned away and only South Africans, about 100, received the food parcels, which were meant to last a family for a month. When the food distribution truck left it was still full of food.

Food parcels are meant to be given to people who are on a list approved by the department. But GroundUp saw South Africans filling in forms on site and receiving parcels, while immigrants that had been registered in August last year by Ethel Musonza of Zimbabwe Isolated Women in South Africa (ZIWISA) to receive food parcels from the Gauteng DSD Buyisa Ubuntu Food Bank were returned away.

Things became so heated that Musonza, assaulted and threatened by South Africans, had to flee the event at the Mana Icreja Crista Church, corner of Andries and Charlene Street, while GroundUp was there on late Friday afternoon.

The department said, “Unfortunately, the foreign nationals who did not receive the food parcels were not on the list submitted by a person named ‘Ethel’.”

“The Department cannot account for the allegations about the involvement of the EFF and its campaign” and “is not involved in any distribution that is politically motivated. As such, no political interference is acceptable nor entertained,” said Ndwayana. “Any misunderstanding regarding Jeppestown food distribution is regrettable.”

The EFF’s Tyhaliti blamed the department for the mix-up. “The matter should be taken up with Social Development because they are the ones who instructed people working with the project not to take anything related to passports. They said it is difficult to enter them into their computer system. It is untrue that we are using food parcels to campaign, the people with IDs were registered,” he said.

However, the DSD says, “The data system does not reject passports and asylum numbers that are legal.” It only has its social workers “make assessments in communities … to ensure that these services are not being used by people that do not need them”.

Contrary to claims made by the DSD, Musonza says she has over 400 forms as evidence. All the names were verified by the Department and sent back to her, she says, and she . printed the forms and brought them to the distribution point. GroundUp has seen the forms.

Musonza said, “People from the Department tore up some of the forms belonging to foreign nationals in front of me. Instead, they started filling out new forms for the SA citizens they gave parcels to.

Among the immigrants turned away on Friday were people with disabilities, blind people who are surviving by begging, and domestic workers who have lost their jobs due to the pandemic. They were mostly Zimbabweans, Mozambicans, Congolese and Malawians who live on the streets or in dilapidated buildings in Doornfontein, inner-city Johannesburg.

Musonza said that at a previous food distribution in early September, refugees, asylum seekers and foreign passport holders were also turned away. She said people who benefited in September benefitted on Friday again. GroundUp spoke to three South Africans who said they had received parcels the previous month as well.

“The food parcels were long awaited and there was a dire need for food,” said Musonza. “Initially the food distribution was supposed to take place in inner-city Johannesburg where most of the registered immigrants live, but representatives from Social Development changed the venue to Jeppestown where the people who previously benefited live.”

Some of the immigrants told GroundUp they had not seen decent food for months.

When they arrived at the church in the morning they heard EFF slogans being chanted and that people receiving food parcels were told to vote for the EFF in the upcoming elections.

“The food parcels were hijacked by EFF members who were making their supporters jump the queue, while blind people, the disabled, and many other migrant communities were turned away after walking long distances from their homes. They claimed government food parcels were not meant for immigrants,” said Musonza.

“We were surprised that even people who had passports, asylum and refugee documents were turned away.”

Two friends, both of whom are visually impaired, Edward Hamadziripi and Edmore Makungura, who left Zimbabwe in 2010, said that although it was raining they had walked all the way from Ellis Park to the assembly point at Nugget Street where they boarded cars to Jeppestown.

“Waiting the whole day only to be denied food was painful. For days we have not had any real food. It’s hard to rely on the money we beg on the streets because sometimes we go home with nothing,” said Hamadziripi.

“To think that we promised our children that we would soon have food. No one knew that they would refuse to give us food,” said Charity Daniel originally from Lilongwe, Malawi.

“The shelves in our home are empty. There is no food. If l do not get food provisions soon my family will starve,” said Chiedza Ndlovu, originally from Zimbabwe. She lost her job as a domestic worker due to the pandemic and now sells sweets on the streets. She too returned home empty handed.

“What happened did not surprise us, the South African government has been excluding us from food parcels since the pandemic started,” said John Msusa from Congo.

“This exclusion is consistent with the policy of the DHA making migration and movement of predominantly black African people a crime,” commented Sharon Ekambaram, Lawyers for Human Rights Manager for Refugee and Migrants Rights Programme.

Next:  Makhanda dumpsite occupiers say they have nowhere else to go, as municipality tries to upgrade it