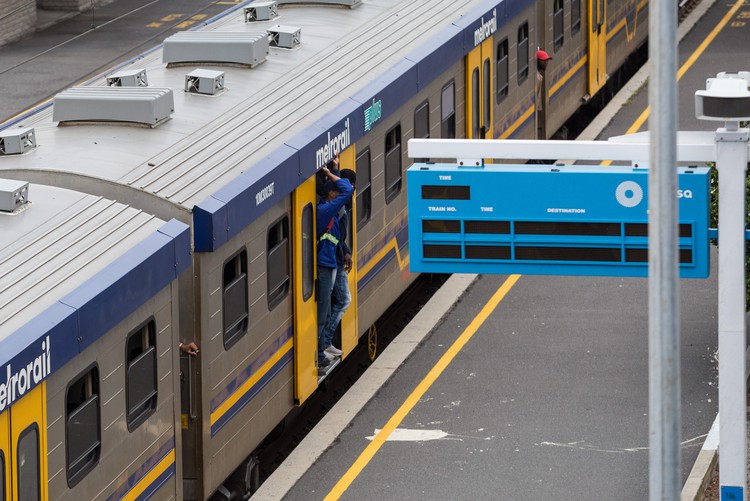 Millions of rands in bogus insurance claims for supposed injuries while using PRASA have been uncovered. Archive photo: Ashraf Hendricks

In its most recent annual report, for 2021/2022, the Passenger Rail Agency of South Africa (PRASA) reported a “flood of fictitious personal liability claims” and says that an investigation regarding these complaints is underway.

GroundUp has seen a leaked PRASA investigation report into fraudulent claims worth at least R9-million, processed by the insurance department at PRASA. This report to PRASA executives, the Hawks and the Auditor-General from September last year uncovered a fraud ring operating out of the commuter rail agency’s insurance office.

An honest person breaks the scam

On 28 May, PRASA paid R67,000 into Zethembiso Dladla’s bank account. This was considerably more than the R1,500 she received in her last salary payment.

PR2P recruited local community members — “volunteers” — to guard rail infrastructure near to where they live. In return, they would receive training and a “stipend” of R3,000 per month, according to the PR2P implementation plan approved by Ramatlakane on 4 January 2021.

Dladla reported the R67,000-deposit to her line manager, Thandeka Mnyandu, saying it was an error.

The next day, Dladla received a call from Sidudzo Mayaba, who said that PRASA had given her this money by mistake, and asked her to come with him to Gateway Mall. In her 8 June 2021 affidavit, Dladla said that she had known Mayaba for two years through her boyfriend and knew he worked for PRASA in some or other capacity.

There, they transferred R55,000 to an account with the reference “Monde”. She was told that she could spend R5,000 of what remained, and she transferred R2,000 to her boyfriend.

Dladla did not feel comfortable with what had happened and approached a Durban PRASA security detail with her story. Soon after, investigators began uncovering a multi-million rand scam run from within PRASA’s insurance division.

The payment came from PRASA’s Insurance department, and was registered as compensation for an injury that Dladla had supposedly sustained at Isipingo train station in January 2019.

But Dladla had never suffered any injury. She told the investigators that she’d never used the train.

The investigators discovered that the claim reference number attached to the payout, which appeared to come from the KwaZulu-Natal claims system, did not exist on that province’s system.

Mandatory pieces of documentation were also missing: Dladla’s medical records, the claims form itself, and the APS (application payment schedule), which needs to be signed by the official requesting the payment and approved by another official.

Even though required documents were missing, three members of the finance department signed off on the claim.

PRASA’s investigators discovered that Sidudzo Mayaba, the man who had called Dladla, took her to the bank and instructed her on what to do with the money, was the former brother-in-law to Sihle Mayaba, who handled claims in PRASA’s insurance division.

The investigators dug into Sihle Mayaba, and were approached by a whistleblower.

The whistleblower told them that they had been a runner for Sihle Mayaba. They collected ID numbers and bank statements, mostly from unemployed people, and handed them over to her “for processing”.

These people would receive money from bogus claims manufactured by Mayaba. Like Dladla, they would then transfer most of the money into another account. Most often this would be the account of Zodwa Khanyeza, a relative of Sihle Mayaba. Sometimes they would withdraw cash, which was then given to Mayaba.

The whistleblower told the investigators that the scam had been running since 2014.

A deep rot in the insurance department

The investigators then proceeded to analyse the claims made in Gauteng and KwaZulu-Natal for the first half of 2021.

In Gauteng, they discovered that in a single month, Sihle Mayaba had submitted APSes for seven claims worth a total of R495,000 that did not exist in the Gauteng claims management system. Mayaba’s superior, Tilly Nkosi, senior manager in the insurance division, had signed off on these claims.

The investigators discovered more irregular payments. They discovered 39 claims worth over R3-million that had fraudulent reference numbers. The system adds claim numbers sequentially, from “00001” up. The investigators found that these claims had numbers well over the current number.

They also discovered 44 claims worth over R5-million that had an invalid number of digits — three instead of five.

The investigators concluded that these claims were processed based on fraudulently generated claim numbers.

A member of the finance department also processed one claim three times, worth a total of R131,000.

In KwaZulu-Natal, 15 irregular payments worth R952,000 were found. Twelve of these payments did not appear in the provincial claims management system. There was a duplicate payment, and two had claims that did not match the accidents and medical records.

In total, in the first half of 2021 alone, the investigators found fraudulently-processed claims worth over R9-million.

PRASA’s insurance claims system was ripe to exploit. The investigators found that the department’s rules were circumvented easily — a claim could be processed without the required documents, and even then, those documents were easily modified or forged.

The people that should have been reviewing documents before authorising payments did not do their jobs. Claims weren’t checked against medical records. Payments were authorised without all the required signatories. The controls that should have kept fraudsters at bay were not present. The investigators single out the supervisory failures of Nkosi, and Tokolle Mahlake, the general manager of the insurance division.

The investigators recommend disciplinary action against Sihle Mayaba and Sidudzo Mayaba, and Nkosi and Mahlake as managers in the insurance division, and a finance manager, Thabiso Phori, for processing duplicate claims and signing off on Dladla’s fraudulent claim.

They also instructed PRASA to open a criminal case, launch a full investigation into fraud in the insurance department, and recover the stolen money.

The honesty of one person, in the lowest-paid role at PRASA, may have saved the beleaguered rail agency millions of rands.

GroundUp approached PRASA’s spokesperson Andiswa Makanda with a number of questions, and a request to forward our inquiries on to the people implicated in this fraud - in particular Sihle Mayaba, Sduduzo Mayaba, Tilly Nkosi, Thabiso Phori, and Tokolle Mahlake.

While our questions and requests were noted, and we offered a day’s extension, we have not yet received a response at the time of publication.

We asked if disciplinary steps had been taken against these officials, and if so, what the sanctions were, and if any of these people were still working at PRASA.

We asked if a criminal case had been registered, and if so, what was the status of the investigation.

We asked if a full internal investigation into the fraud had been completed, and what the total value of the fraud was that the investigation had discovered. And we asked if PRASA had addressed the weaknesses in their administrative system that allowed the fraud to be perpetrated.

"PRASA Management and the Board are rebuilding the organisation into a credible institution to ensure that it is able to deliver on its legal mandate.

"To this effect, several investigations into misconduct, maladministration, corruption, and fraudulent activities have been instituted to address lapses that enabled systematic corruption within the organisation and to ensure consequence management for those who have been found guilty.

"Disciplinary processes of those suspended pending various investigations are at various stages.

"Details of the outcomes of the various investigations in the business will be shared at an appropriate time.

"We are also working with the Hawks and Special Investigating Unit in finalising their investigations on other matters."

Next:  Very few South Africans can swim, says the NSRI. It aims to change this

Investigative journalism such as this needs acknowledgement!

Investigative journalism such as this needs acknowledgement! Nice job! But it is only the beginning. I do hope that you will keep reporting on this, and many other similar, cases to a righteous conclusion! I am unemployed, or else I would have donated. Good luck on your journey!