Homeless: “I never grew up to stand by a robot with a board” 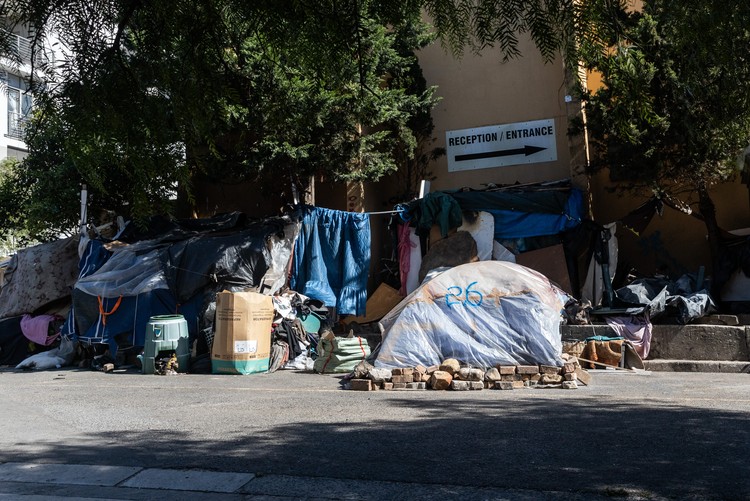 About ten people live on this corner in Observatory, Cape Town. The city’s homeless population has grown massively over the past few years. Photos: Ashraf Hendricks

With South Africa’s economy staggering, and two in every five adults unemployed, “villages” of homeless people are springing up in South Africa’s cities as increasing numbers of people find themselves on the street. In our series on homelessness, GroundUp looks at how they are managing to get by.

Making your way around Cape Town, it’s easy to see the explosion of homelessness on the streets. Makeshift tents can be spotted at historical landmarks like the Castle, as well as alongside highways, and under bridges. Traffic lights at busy intersections almost always have someone holding a cardboard sign pleading for help.

But poverty goes beyond the homeless people. Karen Cain, operations manager The Service Dining Rooms in the city centre says: “There are people here that are not homeless that are coming for a meal.” Some have lost their jobs, she explains, but they still manage to keep a roof over their head. But they can no longer afford the cost of electricity or food.

Cain said that there has been an increase of “white males” coming, who mostly are from the service industry like barristers, waiters and barmen. With the increase of people, Cain said that the dining room eating area, which has capacity for 200 people, is too small. Currently they are serving about 350 people a day. She said that before Covid, people would sit at tables, giving them time to socialise and “eat with dignity”. “Now unfortunately they’re eating with takeaway containers and it’s outside.”

Robin Jordon was one of the hundreds of people collecting a meal at The Service Dining Rooms on the day we were there. He said that he lost his job at an electrical company shortly after the first Covid lockdown started.

Jordon said that he tried to live in shelters but there wasn’t room and he ended up living in “the bush” in District Six. He hustled to make money. He would scratch in bins for things to recycle like paper tins and plastic bottles.

“I never ever grew up to go and stand by a robot with a board. It’s not me,” he said.

While life is tough for Jordon he sees a glimmer of hope. For the last two weeks he has been staying at the Culemborg Safe Space 2 and he says he will be starting a job in November. 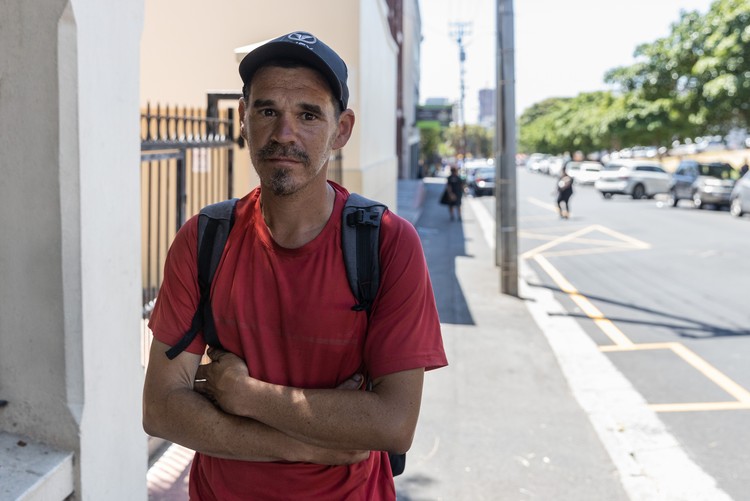 Robin Jordon is living in one of the City of Cape Town’s safe spaces. He hopes things will get better for him in November when he starts a job.

Saliem “Daylight” Hunter last stayed in a formal house about seven years ago. Originally from Mitchells Plain, he says he left because of his financial situation and gangsterism.

He lived in the bushes in Woodstock. He then found his way to Observatory where he has stayed for two years. He lives under bridges or on different streets in the area. He makes money from odd jobs like recycling rubbish or fixing and reselling goods. But most of his money comes from watching parked cars. This isn’t easy, he says. “Out of ten cars, I can make a R2,” he claims.

Hunter says he has a daughter and girlfriend that don’t stay with him, but he still tries to give them money when he can. 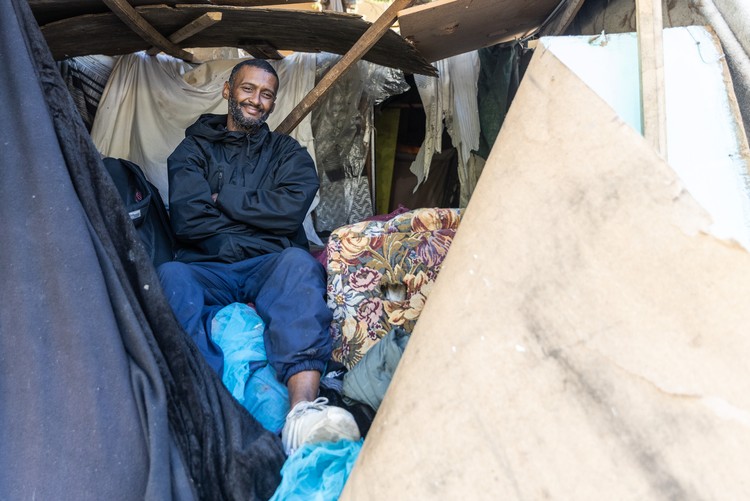 Saliem “Daylight” Hunter stays in a makeshift tent in Observatory.

Under a bridge at the end of the M3 highway, at the turnoff to Muizenberg, makeshift tents, blankets and burnt coffee cans used for cooking can be found. Here, seven people share a communal space while an endless stream of noisy vehicles pass by. A man in his late forties said that he has been there for almost two years. Originally a gangster in Parkwood, he said that he moved to the streets because he wanted to leave the “drug world”.

He says that he sees living here as a “second chance at life”. He explains that they make money from collecting metal and taking it to a scrap yard. Although it’s not always easy, he says that he feels safe under the bridge and that “we live in peace”.

He says they have created a sense of community. “We share what we have.” 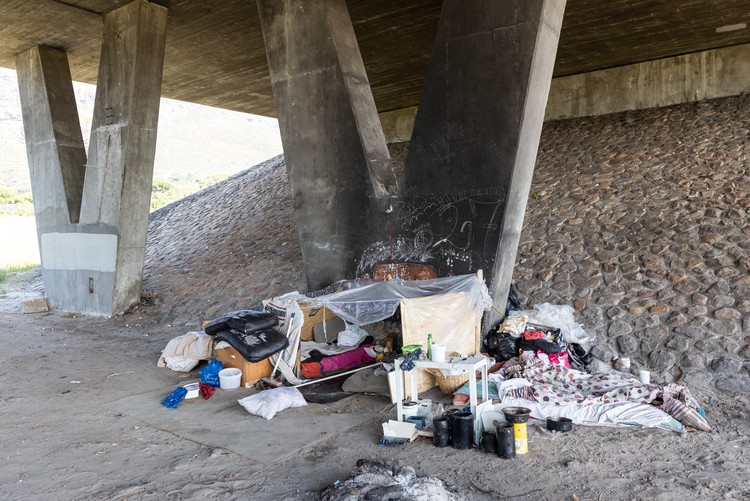 Seven people live under a bridge along the M3 highway.

How many people live on the streets of Cape Town is hard to say. The City is awaiting the results of the most recent census but this is unlikely to give an accurate answer. According to the Western Cape Department of Social Development’s 2021/22 report, there are 37 shelters with just over 2,200 beds.

Cape Town Mayor Geordin Hill-Lewis in a press statement said that there has been an increase in people living on the street and in public spaces since the Covid pandemic. The causes, he said, are “varied and complex”. To assist people off the streets, the City is expanding its safe spaces, such as shelters, over the next three years. This is estimated to cost R140-million. This includes new transitional safe spaces and increasing the capacity of shelters.

But as Karen Cain of the Service Dining Rooms says: For things to improve “the economy has to improve”.

Next:  After two years the Ga-Rankuwa to Pretoria train is running again. We tried it