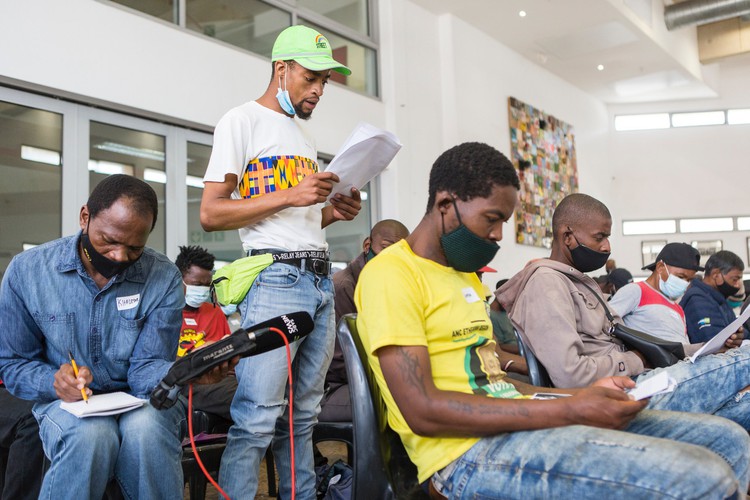 Mxolisi Mavimbela presents a manifesto for homeless people to representatives of political parties at a Durban meeting on Thursday. Photo: Samora Chapman

Some of Durban’s homeless people are gearing up to vote, for the first time ever, in a municipal election.

Over the past year, the Denis Hurley Centre, which has an outreach programme, has been attempting to encourage those who live on the street to register and vote. It’s been a hard sell, according to its director Raymond Perrier.

“Homeless people have more reasons than most to be disillusioned with politicians. So we have been working with UKZN law students all year, pushing hard and helping homeless people to think about their rights and how the Constitution applies to them,” he said.

Before the general election in 2019, the Centre embarked on a pilot project in Durban with the Independent Electoral Commission (IEC) to register people living on the streets who don’t have formal addresses.

“The IEC has been fantastic. They can determine the ward through asking where the person usually sleeps, be it in a doorway or on the beachfront. They are then registered for that ward,” Perrier said.

During registration weekend for the municipal elections, some homeless people had confirmed their addresses (from the national election), while others, about 50, had registered for the first time, he said.

Perrier said the project had now been rolled out to the rest of the country through the National Homeless Network.

On Thursday, the centre organised for representatives of the main political parties in the eThekwini region to address a “town hall” meeting.

“This was a unique event in the country which will demonstrate that homeless people have the same rights and responsibilities as regular South African citizens,” Perrier said.

Six political parties were invited. The ANC, DA, IFP, and Action SA attended while the EFF and ATM did not send representatives. Each party representative was given a chance to introduce their party’s credentials on the issue of homelessness.

Mxolisi Mavimbela, a member of the National Homeless Network, presented its manifesto for the homeless in eThekwini. It focuses on issues such as shelter, access to health care and sanitation, equal treatment by law enforcement officials and increasing economic opportunity.

It states that during the hard Covid-19 lockdown, it was proved that it was possible to provide safe sleeping places and it calls for an extension and formalisation of these, including City support for a newly established women’s shelter, and other sites to cater for 1,000 people within a year.

It calls for better primary health care services and toilets in different locations in the city centre and an upgrade of sanitation at Safe Open Sleeping places. It also calls for a decriminalisation of poverty, and that law enforcement must be consistent with Constitutional rights.

“The majority of homeless people want to get off the streets by finding work, yet the regulations are prejudiced against the poor and informal economy. We demand a review of these policies … including the development of a more just recycling industry,” the manifesto read.

An open floor discussion followed. Most of those who spoke, added their personal experiences, reinforcing the points in the manifesto. An informal book seller told of how he had been struggling for two years to get a trading license from the municipality. Another man related how he has been repeatedly harassed by Metro police. Many people complained of the lack of shelters in the city.

Next:  Striking steel workers to return to duty by Monday