Defence lawyer accuses witness of trying to escape his own prosecution 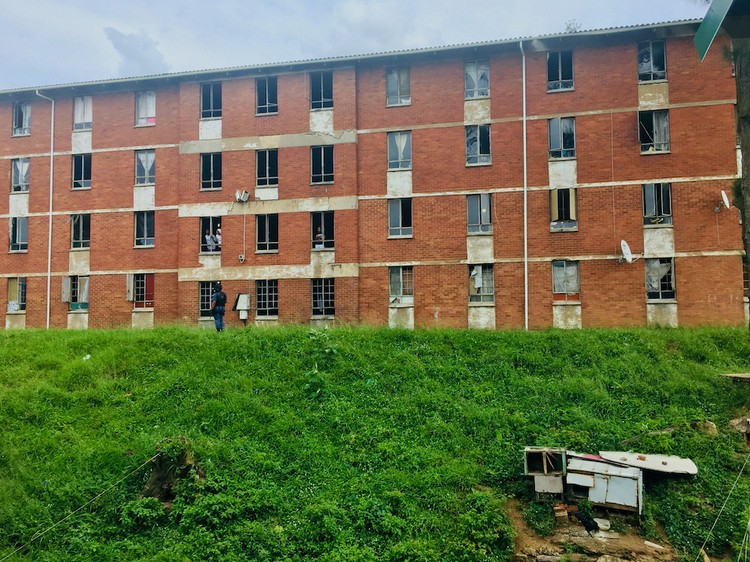 Pictured above is the infamous block 52 at Glebelands hostel in Umlazi, north of Durban where a string of murders and other crimes took place between 2014 and 2016. The eight men accused of 22 charges, including nine for murder and attempted murder, are currently on trial at the Pietermaritzburg High Court. Archive photo: Nompendulo Ngubane

A state witness testifying against the “Glebelands Eight” has denied any involvement in the murders of two men who were known as the “big fishes” at Glebelands hostel in Umlazi, north of Durban.

“I was not part of the killings in Montclair … except to go with the accused and see what they were doing,” said the state witness who was testifying in camera at the Pietermaritzburg High Court this week.

William Mthembu and Thokozani Machi were gunned down and killed in Montclair on 12 September 2015. Mthembu was believed to be controlling the committee chairs of different blocks in Glebelands and that Machi was his hitman.

Their murders were part of a string of killings at the hostel between 2014 and 2016. The accused – Bhekukwazi Mdweshu (a former detective of Durban Central police station), Khayelihle Mbuthuma, Vukani Mcobothi, Eugene Hlophe, Mbuyiselwa Mkhize, Ncomekile Ntshangase, Mondli Mthethwa and Bongani Mbhele – face 22 charges, including nine for murder and attempted murder.

During day two of cross-examination on Tuesday, the witness, who we may not name, said: “On the day Mthembu and Machi were killed, we were traveling in a double cab car that belonged to Badelisi. We entered Glebelands using that car after the killings. Others went to the hostel on foot. Those were Mcobothi, Mbhele, Mbuthuma and Zikhu Mtolo.”

He said after Mthembu and Machi’s death, Mdweshu showed him pictures of bodies believed to be the deceased. “I saw pictures of dead people with blood. One of those people I was able to identify in the picture was Mthembu through the clothes he was wearing. Some of the pictures were on the cellphone and others were actual pictures,” said the witness.

Advocate Martin Krog, representing Mdweshu, said his client denies showing the witness photographs or meeting the witness to discuss Mthembu and Machi’s murder. He also denied any involvement in orchestrating the murder of another man at Umlazi GG police station nor the attack on Block R as the state witness alleges.

On Thursday, LegalAid attorney Xolani Sindane for Mbuthuma, Ntshangase, Mbuthuma, Mbhele and Mcobothi also denied that his clients were involved in the murders as alleged by the state witness. Sindane instead accused the witness of implicating his clients in an bid to escape his own prosecution.

Judge Nkosinathi Chili temporarily excused the witness “until or when the court decides that he is required” again.

The trial continues on Monday where another key state witness is expected to testify in camera.

Next:  Millions in Lottery money spent on football exhibition with limited public access

Previous:  Gay couple legally say “I do” after year-long battle