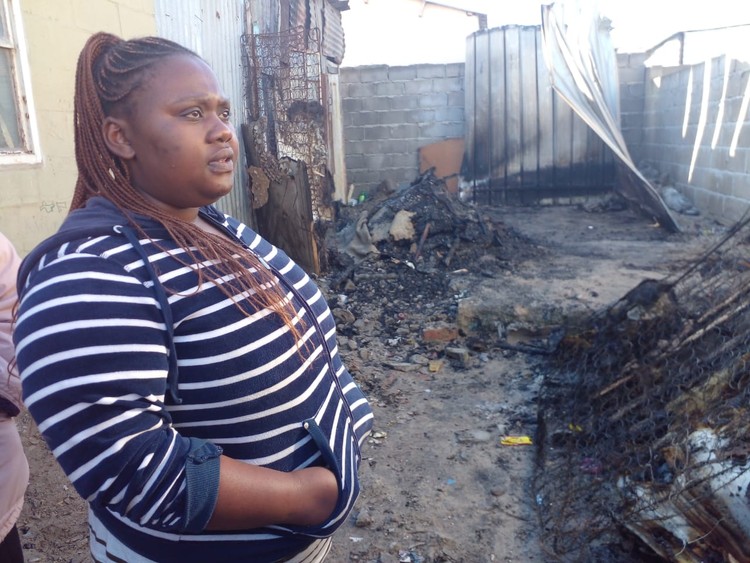 Gugulethu resident Zandile Mzoyi beside the charred rubble of the home where a five-year-old boy died and his three-year-old brother suffered serious burns on Saturday night. Photo: Nombulelo Damba-Hendrik

A crew of firefighters was pelted with stones while trying to respond to a shack fire in Gugulethu in which a five-year-old boy died and his three-year-old brother suffered serious burns on Saturday night. The toddler is still fighting for his life at Red Cross War Memorial Children’s Hospital.

Their mother had left them alone after a neighbour had called to ask her to check on their children as loadshedding had started. She sustained burn wounds on her hands attempting to save her children. She is a single mother.

The neighbour, Zandile Mzoyi, told GroundUp, “We normally help each other with kids.”

She said the lifeless body of the five-year-old was found in the corner of the shack. “The three-year-old is mostly burnt on his face and head,” she said.

SANCO chairperson Nkosikhona Mafenuka said residents had attacked the firefighters because they were 45-minutes late. He said that there was no electricity in the area due to loadshedding when the fire started at 7pm. Mafenuka said they suspected a candle started the fire.

He blamed those community members who attacked fire services for delaying assistance to the family. “Yes the blaze was too much but we do not know if the child was already dead or not. There was no need at all to attack those firefighters who were here to help,” said Mafenuka. He said the firefighters did not return.

The fire burnt itself out.

City of Cape Town Fire and Rescue spokesperson Jermaine Carelse said firefighters only got the call at 7:52pm and arrived at 8:09pm. “The crew ran out a fog jet to extinguish the fire, when community members warned them to leave and damaged the engine’s windscreen,” he said.

He said the crew withdrew from the scene and went to Nyanga police station to report the incident.

Next:  Homeowners clash with shack dwellers over electricity in Mfuleni