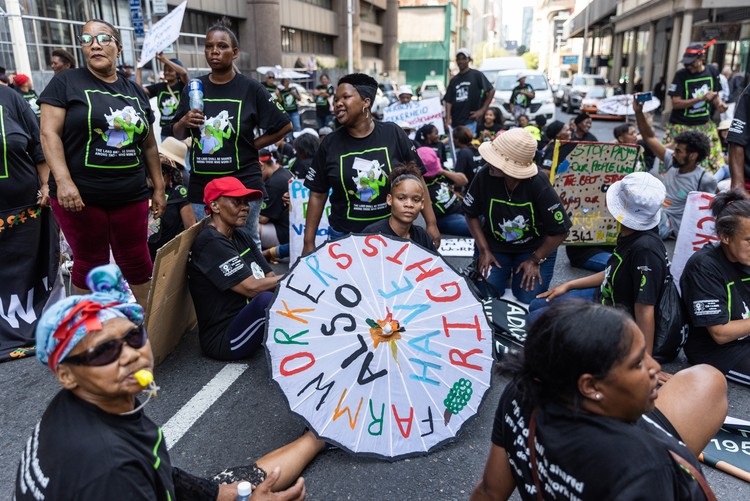 “We provide this country with food yet we don’t have any food,” a farm worker from the Northern Cape said in front of Parliament in Cape Town on Friday.

Laura Boer has been working on a farm for nearly four years. She said that farm workers barely make the minimum wage. They are landless, and they are constantly facing evictions from farms.

Boer is one of about 200 women living on farms in the Western and Northern Cape who marched to Parliament on Friday 28 October and handed over a memorandum of demands addressed to Thoko Didiza, Minister of Agriculture, Land Reform and Rural Development.

The lengthy memorandum set out demands for land redistribution and agrarian reform, a moratorium on farm worker evictions, a ban on hazardous pesticides on farms, and social protection in the form of a basic income grant.

In the memorandum the workers quoted the Freedom Charter: “It is still the will of farm workers and dwellers that ‘The land shall be shared among those who work it.’”

The march was organised by the Women on Farms Project (WFP) and the Rural Women’s Assembly. The memorandum was received by a representative of the presidency. Some of the placards read: “Land = dignified lives”, “Prosecute farmers who violate farm worker rights”, and “Courts stop granting eviction orders”.

Colette Solomons, director of WFP, said to GroundUp that since the uprisings on farms in 2012, things “have not improved in the last ten years” in the lives of farm workers. “In many respects, things are actually deteriorating. Work is more insecure. Evictions are happening at a pace. We can no longer continue being dependent on farmers,” she said. 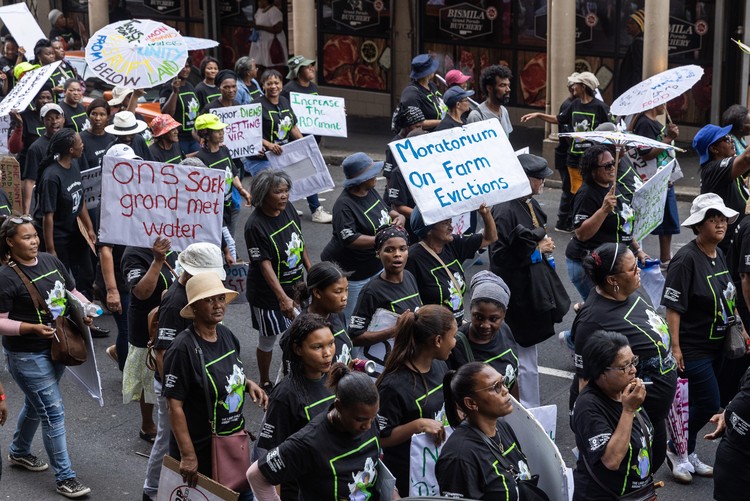 Zwelivelile Mandela, Chairperson of Parliament’s Portfolio Committee on Agriculture, Land Reform and Rural Development, delivered the opening address. Mandela spoke about preliminary findings from farm visits conducted by the committee with the Department of Labour and Employment in the Western Cape earlier this year.

Mandela said that the joint committee heard about how farm workers lacked access to water and electricity. They also heard about illegal evictions, violations of labour rights, and unfair dismissals and retrenchments of farm workers who had worked on farms for decades.

He said these issues must be “urgently addressed as it is central to restorative justice in South Africa… Our oversight found some of the worst infringements on the rights of women on farms.”

Esau said that in the Witzenberg, Paarl, and West Coast areas, that 807 out of a total of 2,575 farms were non-compliant. Common issues were that injuries were not reported, employees were coerced into signing illegal contracts, and there was a lack of access to drinking water and ablution facilities.

A resolution dealing with various issues was passed at the end of the meetings and drafted into the memorandum.

Next:  Eastern Cape farm families plead for access to electricity and water

Previous:  After two years the Ga-Rankuwa to Pretoria train is running again. We tried it