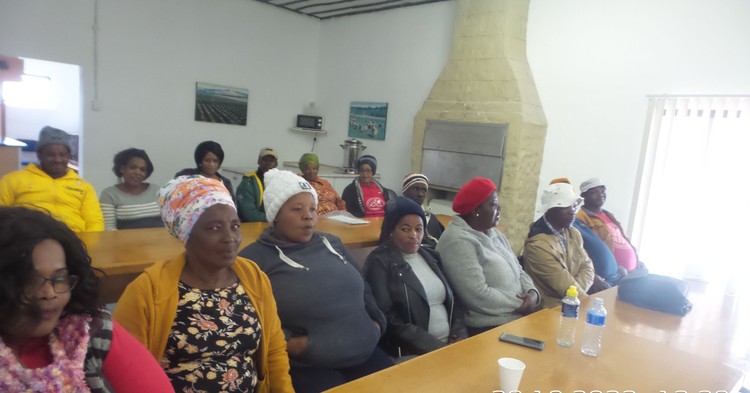 Some of the farm dwellers in Alexandria who attended the dialogue on Friday with representatives from the Sundays River Valley Workers Forum, Agri-Eastern Cape, Alexandria Farmers Union and the Sundays River Valley Municipality. This follows complaints that some farmers are withholding access to electricity and water, while others apparently charge unaffordable fees to people living on their farms. Photo: Joseph Chirume

Farm worker rights lobby organisation, Khanyisa Educational and Development Trust, hosted a dialogue in Alexandria near Port Alfred at the weekend to investigate claims that some farmers are withholding access to electricity and water, while others charge unaffordable fees to people living on their farms.

“We want to find solutions to problems regarding the provision of basic services to workers and farm dwellers,” said Simphiwe Dada of Khanyisa.

During the dialogue some farm dwellers complained of having to pay high electricity fees while others say they have been living in darkness for years.

However, farmers explained that it is too costly to install infrastructure for electricity to the homes of people who no longer work on the farm.

Among the farm dwellers was Pindiwe Nkwinti who said she has been living in a shack on a farm for 34 years. Her husband, who died in 2000, was employed at the farm. She has six children, five are unemployed and one still goes to school. “The farm is the only place my children and I call home.”

The dialogue also follows a meeting between the groups earlier this year after farm worker Xoliswa Moko and several other workers were retrenched in November 2021. The workers then approached Khanyisa to intervene.

Moko, speaking to the representatives, said she was only paid R3,000 for working in the farm’s kitchen for nearly 11 years. She currently lives with her parents and her two children.

“We used to pay the farmer R250 for electricity per household. The amount shot up to R800 after we were dismissed. We are afraid he will disconnect our electricity if we don’t pay,” she said.

“This matter needs to be dealt with from both sides,” he said. “There is no abuse of power on the part of landowners regarding electricity. Who is ultimately responsible to provide the services and carry those costs? Land owners can’t be expected to carry the costs. There should be a better solution to the electrification of farm dwellers’ houses.”

Eskom’s Nomfundo Gonya informed the group that the power utility had started a project to electrify the homes of farm workers and dwellers.

“For the project to succeed, we need the support of landowners. The farmer has to get a quotation and approval from Eskom, and meet all the costs for electrification. However, Eskom will reimburse the landlord 80% of the cost after the process is completed,” she said.

Zolile Losi, of the Sundays River Valley Municipality said, “We urge farmers and their workers to work together so that the indigent policy can be spread to the farm workers. We can’t do this on private land where the farmer is not willing.”

Losi proposed that a task team where everyone is represented be established to resolve the concerns raised during the meeting. McNamara agreed with Losi’s proposal.

Next:  Millions to be spent to complete abandoned Lottery-funded projects