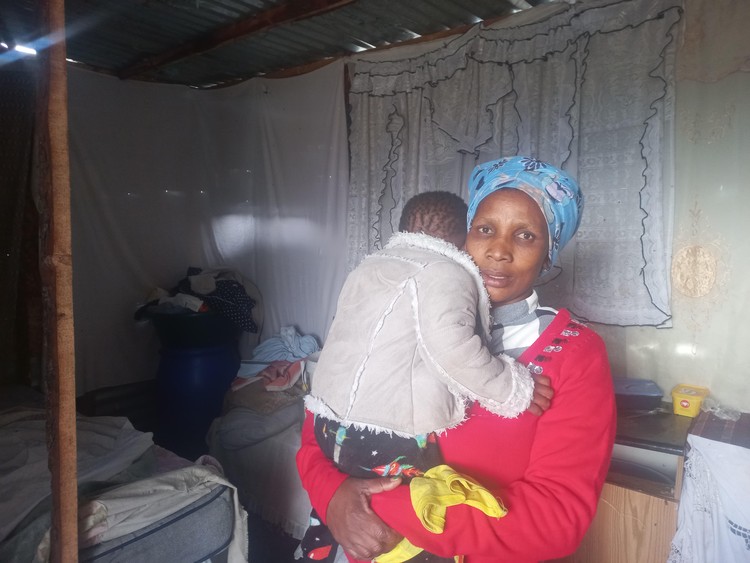 Nosakhele Gqirhana says she cannot afford to pay to move her material and possessions to a new location. Photo: Siphokazi Mnyobe

Families living on and around a dam wall in a huge informal settlement in the Driftsands Nature Reserve in Cape Town have been told to move. But the families say they won’t move unless CapeNature helps pay for the relocation.

The land was occupied at the peak of the Covid pandemic. Today, there are thousands families in the Dubai informal settlement, according to community leader Thando Linganiso. Of these, a large number live on the dam wall or in the wetlands.

Nathan Adriaanse, spokesperson at the Western Cape Department of Human Settlements, said CapeNature, which owns the land, obtained an eviction order in 2020. But during the National State of Disaster this could not be enforced. He says the new land is more suitable for the families.

He said some of the reserve isn’t suitable for settlement because it consists of wetlands, the Kuils River and “flood reduction infrastructure”. He said the occupiers had erected structures on the dam wall, which puts them at risk if there is heavy rainfall.

“We must emphasise that we are asking residents who are at risk to voluntarily relocate to an area within the Driftsands Nature Reserve,” said Adriaanse.

However, the future of the reserve is unclear. The provincial environment department issued a notice in the provincial gazette on 21 January of its intention to abolish Driftsands Nature Reserve. According to the notice, the reserve, which was set up in 1983, has been “subject to encroachment by informal settlements” since 2004.

“In 2020 the nature reserve was further severely impacted by an influx of people … the natural environment inside the reserve has been and continues to be irrevocably transformed and the ecological impact in the occupied areas is irreversible.” The department said large areas of the reserve had lost their biodiversity value.

“The abolition of the Driftsands Nature Reserve will enable other land use options to be formally considered.”

According to CapeNature’s Land Affairs and Legal Services team leader Tabassum Paleker, the Western Cape government has not decided what to do with the land as yet.

Meanwhile, residents say they want help with the move.

Zandile Gomba says she moved to Driftsands because she could no longer afford the R600 a month she was paying to rent a shack. “I know that I’ve broken the law by occupying land illegally but I had no choice. I could not afford rent after losing my job during the pandemic.”

She is afraid the move will cost her money she does not have. “CapeNature should meet us halfway by providing transport and material,” said Gomba.

Linganiso said most of the people in the area are unemployed and asking them to use their own money to move is unfair.

“The people here live in unbearable conditions. Human Settlements told us they can’t build on this land because it is wetland. We can’t agree to move without making sure that services are delivered on the land we are expected to move to,” said Linganiso.

When GroundUp visited the area on Saturday 28 May, a crowd of more than 500 people had gathered outside in the rainy weather for a meeting on the move and to elect a relocation committee.

They said they wanted help moving, materials to build shacks and services on the new land.

Nosakhele Gqirhana told GroundUp she had bought material for her shack at a scrapyard for R1,000 and was afraid it would not survive the move. She came to Cape Town in 2020 to be with her daughter who was ill. Her daughter has since died. Gqirhana is unemployed and has three grandchildren, all under ten years old.

“I won’t be able to afford transport that will relocate me to the new land and still buy material,” said Gqirhana.

Linganiso said he was trying to set up a meeting with CapeNature and provincial government officials.

Next:  Middelburg woman must get R540,000 from the Minister of Police, court rules

Previous:  Child abuse: has the early warning system broken down?

Covid-19 informal settlements are not the solution

This culture of occupation by age appropriate people is becoming a problem as it is done intentionally. What kind of community leaders encourage people to move to a wetland? Look at Siyahlala Informal Settlements occupying the railway line - is this desperation or a money-making scheme? For their own sake and safety they will have to move to a safer place. Property value has gone down in places like Delft, and illegal electricity connections threaten the safety of other residents. It's time to hold accountable the facilitators of land grabbing who are pocketing money out of these transactions. As much as we all agree that there's not adequate and decent accommodation, placing a burden on the locals cannot be justified while people are enjoying double storey houses in the Eastern Cape.