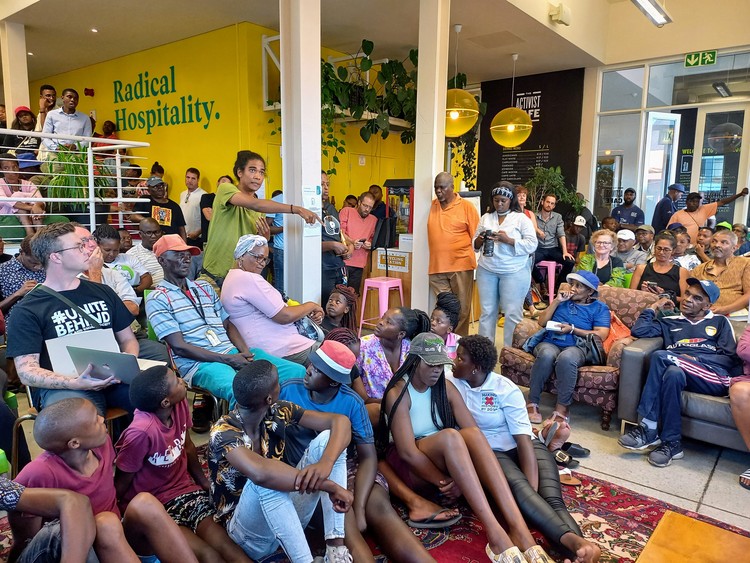 Civil society groups met at Bertha House in Salt River on Wednesday to discuss challenges during loadshedding and how the power crisis could be resolved. Photo: Marecia Damons

Civil society groups are planning to take to the streets of the city centre ahead of President Cyril Ramaphosa’s State of the Nation Address (SONA) on 9 February. They are demanding an end to Eskom’s rolling blackouts and the devastating impact it is having on daily life.

On Wednesday evening, more than 80 residents, scholars, organisations, and members of civil society groups met at Bertha House in Salt River. Many people spoke out about the challenges they experience during loadshedding and how the power crisis could be resolved.

The meeting, facilitated by #UniteBehind, also marked the start of the #FixEskom campaign to get the government to end loadshedding and to find alternative power producing sources. This comes in the wake of the National Energy Regulator (NERSA) approving Eskom’s electricity tariff hike for the 2022/23 financial year and 12.74% for the next. This will be effective from 1 April 2023.

Under the #FixEskom campaign, they are demanding that loadshedding end by December 2023 and they want Mineral Resources and Energy Minister Gwede Mantashe to be fired. Some of their other demands are (1) the planned tariff increases to be scrapped; (2) for municipalities to procure their own power and to build new power lines and (3) substations to enable investment in renewable sources.

#UniteBehind director Zackie Achmat said they are encouraging people across the country to join the #FixEskom campaign. Achmat said that those who are unable to take to the streets in February can organise lunchtime pickets.

Nonqaba Melani, who lives in Site C in Khayelitsha, told attendees that one of the biggest challenges of loadshedding is the damage it causes to appliances. She said this has also caused electricity boxes to explode, causing shacks fires.

She said many residents are opting to use paraffin and gas to boil water and cook.

Bridget Nkomana from the Back2Work Campaign said while there are talks of the City buying electricity from other power producers, there are concerns over its affordability.

In a statement this week, Assembly of the Unemployed said that by implementing the 18.65% electricity tariff hike, “Eskom is stifling consumers, especially the poorest of the poor, who can barely afford the current rates”.

The group said that the “public should not have to pay for ongoing corruption, mismanagement and Eskom’s wasteful expenditure”. They too are calling for mass action against the increases and loadshedding.

Next:  Poo protest in Gqeberha

Previous:  Are police operations having a real impact on crime in Delft?