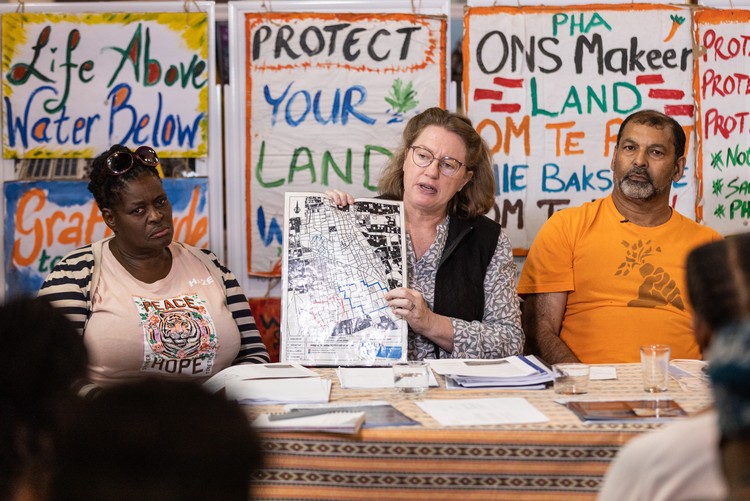 The Philippi Horticultural Area (PHA) Food and Farming Campaign’s Hazel Nyaba, Susanna Coleman, and Nazeer Sonday voiced their concerns over the potential approval of the 479-hectare development in the area. Photo: Ashraf Hendricks

The proposed urban development of the 479-hectares of land in Cape Town’s Philippi Horticultural Area (PHA) could cause “irreplaceable loss of significant and fertile agricultural land”. This is according to members of the PHA Food and Farming Campaign who believe that the Oakland City development could potentially destroy farming on the land and dry up the Cape Flats Aquifer and food security.

The Campaign wants the land to be used for agricultural purposes.

The development initially proposed housing for 15,000 families, schools, commercial, and industrial facilities, and the remaining land for conservation.

The City of Cape Town initially applied to the Department of Agriculture in 2009 to change part of the land from “horticultural use” to “urban development”. However, the department denied the application. The City then rezoned the area in its 2012 Spatial Development Framework and the development site now falls within the urban edge of the greater PHA.

The court also ordered that proper public participation be done. Comments from the public on the development’s EIA closed on 24 February 2021.

The new EIA report is expected to be submitted to Bredell this week.

Susanna Coleman, PHA Campaign volunteer, said the decision to give the development the green light a few years ago had to be reconsidered under the current climate circumstances.

“We now know there is going to be less rainfall. There are going to be more extreme climate events,” she said. Coleman also voiced concern that the development might trigger more proposals in the surrounding PHA area.

Nazeer Sonday, PHA campaign chair and small-scale farmer, believes that the development could dry up the aquifer and encroach on food farming space.

“It is ludicrous of [the developer] to claim that the impact of the development is actually going to be a good thing for the City.” Sonday said he is confident that Bredell would make “the right decision” when considering the EIA and public comments.

In response to GroundUp’s questions, Bredell’s spokesperson, Wouter Kriel, said that the minister “will apply his mind to all the information before him in order to make a decision in this matter”.

He said that should the development go ahead, it will “result in job creation and will address the shortage of housing opportunities”.

The developer, Oakland City, did not respond to GroundUp.

The City said it could not yet comment on the issue until it has had an opportunity to go through the EIA, which will first be considered by the provincial government.

Next:  Terry Pheto’s house may go up for auction to recover Lottery funds