“We are not forcing anyone to pay the money. We are creating jobs for ourselves” 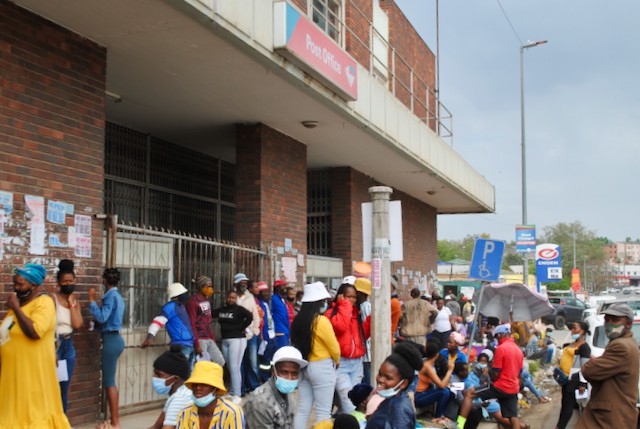 People pay between R50 and R100 to be at the front of the queue to collect their Covid-19 R350 grants at Mthatha’s main post office. Photo: Mkhuseli Sizani

People going to the Mthatha main post office to collect their “Covid” Social Relief for Distress (SRD) grants, pay between R50 and R100 of their R350 grant to jump to the front of the queue.

Grant beneficiaries say security guards and a group of self-appointed residents, who call themselves the R350 queue marshals, sell the first 100 spaces to late-comers. People in the queue who object are threatened with sjamboks and knobkerries.

The other two nearest post offices, BT Ngebs and Mthatha Northcrest, only serve 80 people a day and do not have “marshals”.

On three separate days GroundUp found snaking queues right around the main post office. Most at the front had paid to be there. The marshals wait opposite the main door to collect their share of the R350 grant.

Those who refuse to buy space, like Siyamcela Honono from Sibangweni, say they are threatened. On Friday last week Honono arrived at 5am, Honono waited behind more than 200 people in front of him, many of whom had paid.

He said every cent of his grant means a lot to him.

“If the other two post offices were serving more people a day, we would not be paying these bribes,” he said.

Micco Lutshiti, from Ngangelizwe, said, “I arrived here at 6am and about 150 spaces were sold ahead of me.”

He said a “marshal” will simply tell a person that “he has 15 or 20 spaces in front of you that are reserved for his clients, and nobody argues with them”.

Mongezi Mayo, chairperson of the R350 queue “marshals”, said, “We have been marshalling the queue ever since these grants were introduced. We were assisting the police and soldiers to enforce social distance. At that time we used to sleep here because we were competing with amapara [drug users] who were also selling the space for R50.”

“But later we realised that the beneficiaries were being robbed by amapara after collecting their grants. Then we decided to group ourselves and become the queue marshals in order to make a living and protect the people from amapara. In total we are 25 including eight women,” he said.

“We are not forcing anyone to pay the money. But we are creating jobs for ourselves.”

Alfred Hlezeni from Mqanduli said, “Beneficiaries pass our numbers to one another especially those who live too far from Mthatha. I even provide them with accomodation and food if they arrive too late and can’t be helped by the post office. But I only charge them R50 for a space. Those whose grants have not been processed we even help them with taxi fare and we don’t charge them if their money is not available.”

Nomawethu Siba said she takes home between R150 and R200 a day. “Each member of our group is not allowed to sell more than four spaces a day,” she said.

Johan Kruger, national spokesperson for the Post Office, said the number of beneficiaries served depended on the number of tellers and the funds available. Also, some shopping mall managers restricted how many people may queue.

“The Post Office does not have control over the actions of members of the public outside our premises and we advise our customers not to pay a bribe,” he said.

He said people should report such activities to the police.

Next:  Protests erupt after child electrocuted by illegal connection

Previous:  These villagers threatened not to vote if their road wasn’t fixed, so the municipality sent a truck. But the truck broke the water pipes the villagers had laid

I don't understand why our SASSA officials are not taking this matter seriously because all over SA selfish people are taking money from the poor - even people who work at the post office are busy taking ID or copies from people who don't want to queue or people who arrived late. They start with the ID in the morning, then around 11 they start opening and will only pay 50 people or less then tell them that money is finished. You can even see the post office workers collecting IDs from people.

Imagine the person is a government employee. He or she's earning money every month. Now they enjoy taking from the poor.

Im saying this on behalf of our brothers and sister who r not working but selfish workers take money from them. South Africa is so corrupt and no one is taking any action. Please help our people.