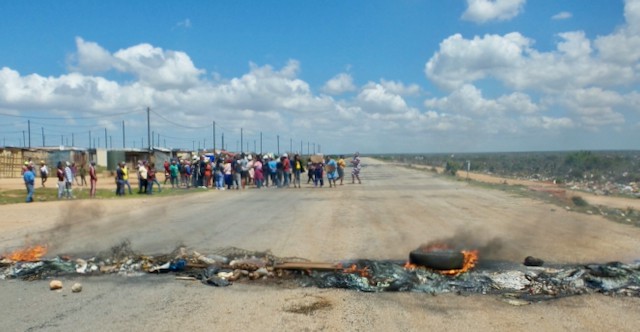 One of several groups of protesters from NU29 in Motherwell on Monday who blocked Uitenhage Road at several points complaining about a lack of formal electrification. Photo: Joseph Chirume

Protests erupted in Motherwell, Gqeberha, on Monday after an eight-year—old child died, apparently electrocuted by an illegal electricity connection. Residents of Greenfields and Lingelethu informal settlements blocked Uitenhage Road in protest over a lack of electrification.

Aqhama Patisi died on Friday in Greenfields while playing with friends at the informal settlement, according to police spokesperson Captain Gerda Swart. “The victim was taken to the Motherwell Community Health Centre for medical treatment, but sadly passed away.”

Resident Thozama Duma said the Nelson Mandela Bay Municipality had promised that their shacks would be electrified by July 2020.

Duma said, “Residents of these two informal settlements will not vote because it is a waste of time.”

“Infrastructure to electrify our areas was erected last year. The settlements have poles and cables while some shacks have meter boxes inside them.”

“What is delaying the officials from connecting electricity? Do they want our children to die from being electrocuted? We agreed at our recent meeting that no provision of electricity in our areas, there will be no voting.”

Between them, Lingelihle and Greenfields have almost 4,000 households, according to resident Theo Dosi.

“We founded these two informal settlements more than three years ago after having lived in backyards around the metro. I was hoping that the government would quickly construct decent houses. We have held several protests in these years but it seems officials are reluctant to assist us. We have decided to withdraw our votes in the elections hoping that the government may listen to us.”

Dosi said residents also had to raise funds to buy water taps. The municipality had supplied one tap. There is also a great shortage of mobile toilets.

“We had no choice but to dig our own pit toilets in our yards,” said Dosi.

Before the development of NU30 two years ago, NU29 was the only place in Motherwell where people were being relocated. They occupied two pieces of municipal land.

Mayco Member for Electricity and Deputy Mayor Luxolo Namette said, “We face a challenge with our supply chain system and the lack of electricity transformers. We are doing our best … I assure you that our artisans are on the ground working to get our people electricity.”

“Our deepest condolences to the family of the young child.”

Next:  Survivors of apartheid violations sleep outside Constitutional Court

Previous:  Grant beneficiaries are paying R100 of their R350 to jump the queue