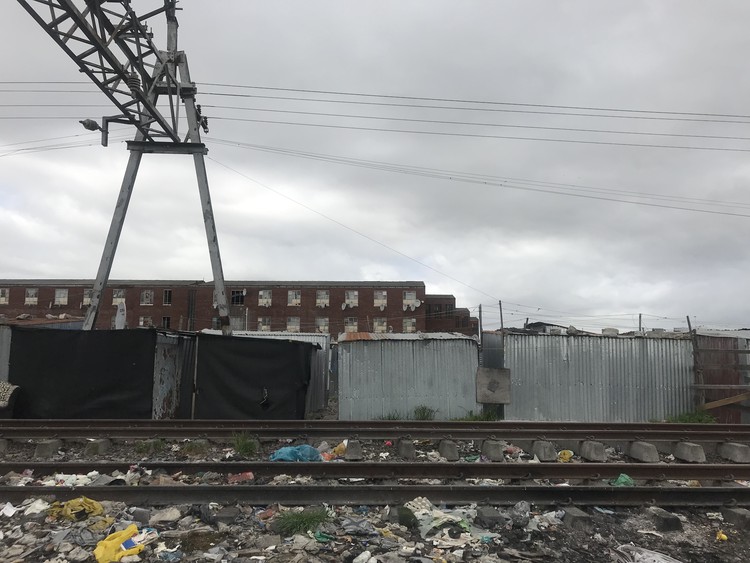 Shacks built by Siyahlala informal settlement residents on the railway line in Langa will only be relocated next year. Photo: Tariro Washinyira

The Passenger Rail Agency of South Africa (PRASA) has been granted a last minute reprieve by the High Court in Cape Town, extending its deadline to relocate families living along the railway line in Langa.

When GroundUp contacted the rail agency earlier this week, it said that officials were racing against the clock to meet a looming deadline set by the Western Cape High Court earlier in 2021, ordering the relocation of the occupiers. PRASA said it was in the “final stages of the process and that any changes will be communicated to the relevant people including affected residents”.

Siyahlala informal settlement was established in 2016 on PRASA-owned land and then expanded towards the train station along the railway tracks. PRASA started talking to the occupiers in January and February to urge them to vacate the land.

On 30 July, the court granted PRASA an order for the Siyahlala families to be moved. The order stated that the families were to be moved by 26 November, and that the new site should have housing and basic services. The court also ruled that the families must be allowed to visit the new land at least four weeks before the relocation. Those refusing to be resettled could be forcibly removed.

In August, we reported that land in Eerste River was identified, where the Housing Development Agency (HDA) intends to build over 2,000 emergency housing units for the Siyahlala families.

However, when we contacted community leaders earlier this week, they had surprisingly not received any updates from the rail agency about the relocation.

On Friday, PRASA said in a statement that it has returned to court to extend the order. The deadline was pushed back to 31 July 2022 “to allow for further consultations with affected communities”.

PRASA said its officials, together with representatives from the City of Cape Town and the Department of Public Works, had been met with opposition from the residents of Eerste River. “The community of Eerste River issued a petition in September, opposing the proposed move of Langa residents to their area. Consultations with the receiving community are still ongoing.”

PRASA added that the closure of its Central Line had “come at a huge cost and inconvenience for the hundreds of thousands of commuters who rely on affordable railway transport”.

According to the rail agency, it intends to move nearly 8,000 shacks built on three different railway lines in Khayelitsha and Phillipi.

On Friday, Langa community leader Nomzomo Gatuya confirmed that they had still not received substantial feedback from PRASA since their last meeting on 20 October.

Next:  Law and power: the long road to equality for gay men

Previous:  We have a new Covid variant. An epidemiologist explains what we should do