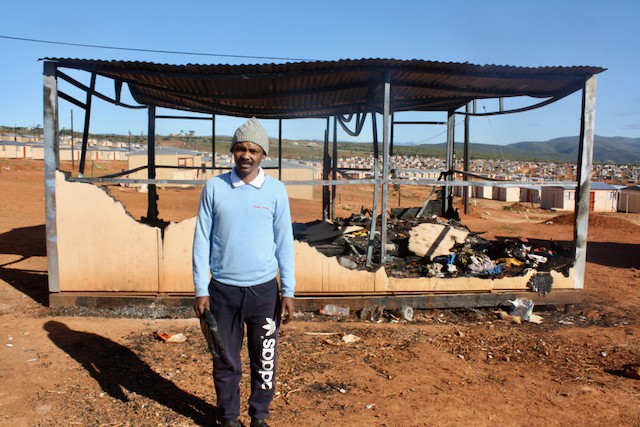 The bungalow where Andisile January was living was destroyed by a fire on 15 August. Photo: Thamsanqa Mbovane

On Sunday night, 15 August, a fire destroyed the home and all the belongings of Yoliswa Maneli and her boyfriend, Andisile January,

The home was a new bungalow, specially reserved in a housing project for people with disabilities in Kariega.

January suffers from epilepsy and Maneli is unable to speak.

They used to live in separate shacks in Area 11 before being relocated last year in June to the area locally dubbed Dubai. It has 500 temporary structures to accommodate elderly people and people living with disability. People were relocated from six wards in KwaNobuhle and from one in KwaLanga. Dubai was part of the government’s Covid-19 de-densification strategy.

January and Maneli were in a neighbour’s home when the fire struck. The settlement only has jojo tanks for water and they were unable to quench the flames. Two fire trucks arrived and put out the fire, but it was too late.

“We have lost our ID documents, our clinic cards, plus food and our clothes. Luckily, there was no one inside the bungalow,” said January.

The couple are now forced to live separately. She lives in her aunt’s four-roomed house, together with seven other people. Maneli has moved back to his bungalow, but it is too crowded, which is why he had moved in with Maneli.

More than a year since the relocation, 78 bungalows in Dubai have not been occupied. Residents blame “politics” in ward 45 for this. Some ward committee members are accused of reserving bungalows for “their people”.

Maneli and January want to know why they cannot be moved into one of these empty homes.

Shacks may not be erected in the settlement. But Cushe said, “If the municipality doesn’t want to sign out another new bungalow, then we will break the law and build a shack right where the burnt bungalow had been.”

Municipal spokesperson Mthubanzi Mniki had not responded to GroundUp’s queries at the time of publication.

Next:  Bathabile Dlamini to be prosecuted for perjury