End of taxi war in sight? 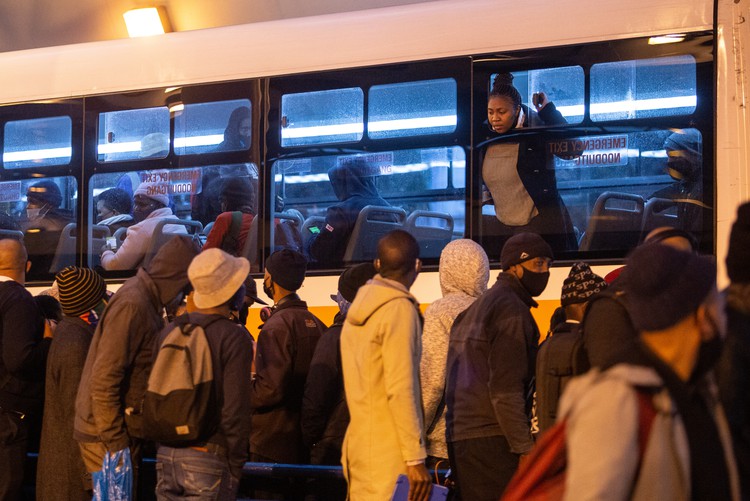 There were long queues for buses in Bellville early on Monday as the impasse over a route contested by Congress for Democratic Taxi Associations (CODETA) and Cape Amalgamated Taxi Association (CATA) continues. Photo: Ashraf Hendicks

Empty classrooms, snaking queues for buses and small business losses are just some of the effects of the conflict between rival taxi associations in Cape Town.

It’s been about a week since the busy minibus taxi route (B97) between Bellville and Mbekweni, Paarl was suspended for two months. This comes after violence between rivals Congress for Democratic Taxi Associations (CODETA) and Cape Amalgamated Taxi Association (CATA) left 82 people dead and dozens injured this year.

Peace talks between CATA and CODETA, mediated by Transport Minister Fikile Mbalula and Western Cape Transport MEC Daylin Mitchell, had previously reached a deadlock and no agreements were made. The matter then went to arbitration and the groups are hoping for a positive outcome when they meet again later on Monday.

Meanwhile, commuters who rely on the taxi services along this route are feeling the pinch.

At Heatherdale Primary School in Belgravia, attendance numbers have dropped drastically since the taxi violence erupted last month. According to Principal Jacqueline van der Heyde-Adams, the school usually has about 230 learners per day, last week attendance ranged between 33 and 51 learners.

On Monday, there were 106 learners, which is still less than half of what is usually expected. Van der Heyde-Adams said that this was linked to the taxi violence and limited travel services. “There’s been so many disruptions this year. We just want stuff to go back to normal,” she said. “Teachers made preparations and now we have to change everything again … It is very sad but you also have to consider the safety of your learners.”

At the Golden Arrow bus terminus in Bellville, lines were snaking with buses seen coming and leaving frequently. The taxi rank opposite only had a few minibus taxis with barely any commuters. Nearby, several traffic vehicles filled the empty parking spaces and about ten gun-wielding soldiers stood huddled on the pavements along Belrail Road, where taxi drivers start their commute.

“Our lives are in danger,” said Cheslin Liebenberg, a taxi conductor on the Bellville to Eerste River route. He said that the army and law enforcement deployment has allowed them to continue working. “They are protecting us,” he said. “We must provide for our families,” said Liebenberg, who supports his wife and children aged one and ten. He said that since the violence started, taxis have had fewer commuters.

“It’s affecting my pay. It’s affecting my life. There’s no people here” said taxi conductor Brandon Yuren. He said that the army makes him feel safe, but on the road they’re on their own. He said commuters are scared and that they’ve had to convince and explain to customers which routes are safe.

For a small butchery in Bellville, fewer people traveling through the rank has meant fewer customers. Nokuzola Quphe, trainee manager at the butchery, on Monday told GroundUp that they once had long queues at the end of a month. Six of her colleagues from Kraaifontein, Wallacedene are also struggling to make it to work, she said.

“Our customers don’t come any more. We are not making any profit. We are struggling to pay employees, suppliers, electricity, water and rent. The company has decided to reduce working hours for the staff to cut costs,” she said.

An woman who only identified herself as Nosikatini, said she travels from Kraaifontein and now has to walk a long distance from her home to the station.

“We are only using [trains] because it is what is available. They are not reliable. Skollies at times attack us before we reach the station. They take handbags, phones and jackets.” The woman said that managers have been threatening to issue written warnings despite being aware of challenges to get to work because of the taxi issue. Her working hours and wage have also been reduced.

Meanwhile, CODETA spokesperson Andile Kanyi said that they are hoping for a positive outcome after Monday’s meeting.

“Hopefully they will get a positive result, so that we’re able to operate fully, and to bring peace and stability in the Western Cape between two organisations,” said Kanyi.

Next:  Open letter to City of Cape Town: Fix our vleis!

Previous:  How Africans and Indians are trying to bring peace to Phoenix