CPOA says it intended to upgrade Observatory building, but new residents say they will not move

A large group of backyarders and shack-dwellers from different Cape Town townships, who call themselves Singabalapha or “we belong here”, have occupied a vacant property that belongs to the Cape Peninsula Organisation for the Aged (CPOA). They have declared that they intend to stay there until the government provides them with alternative accommodation.

A spokesperson for the group, Barbara Vuza, told GroundUp that most of their members have been living in shacks and backyard structures for years, even though most have long been on housing waiting lists. The organisation’s members are fed up with living under these conditions, she said, and when they saw a property in Cape Town’s suburb of Observatory which had been vacant since February they decided to seize the opportunity and take occupation of what was clearly an unused building.

She said as a former combatant in APLA during the struggle against apartheid: “We learned to grab what we need when we had to. We don’t want to do this, but we had to grab this opportunity.”

On 21 September, two weeks after the occupation began, the CPOA visited Arcadia Place. The organisation confirmed in a statement that its management had “engaged directly with the occupiers at Arcadia Place” and had explained that the building needed to be demolished because it was unsafe and also that the intention was to “rebuild Arcadia as a new welfare retirement home”. 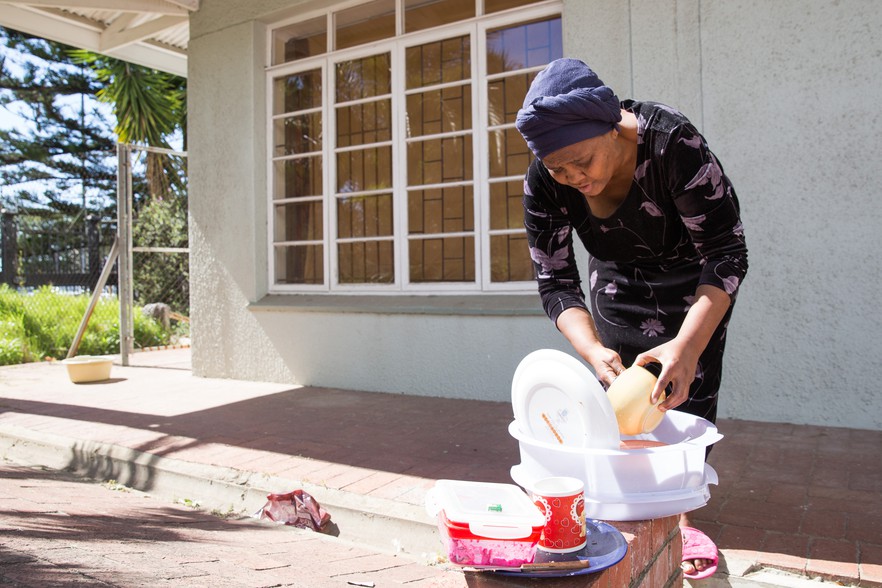 Barbara Vusa cleans dishes. She said that about 200 people now stay in the building. There is no running water and some electricity has been cut. Residents are using bathrooms at the nearby Pick ‘n Pay and McDonalds to relieve themselves and taps at the petrol station to collect water.

The CEO of CPOA, Dr Michael Zipp, was present at this meeting, where the CPOA explained that it is a non-profit company that provides low-cost “welfare homes” to the elderly with the help of a government subsidy.

According to Vuza, it was a fairly amicable discussion in which the CEO expressed his reluctance to evict the occupiers. It appears all parties agreed that when it comes to affordable housing “the government had failed everybody”.

Zipp said in a later statement: “CPOA has promised the Arcadia residents that they can return to their home in Observatory once Arcadia has been rebuilt. CPOA is committed to provide safe housing to those older retirees who do not have the financial means to adequately care for themselves in old age.” 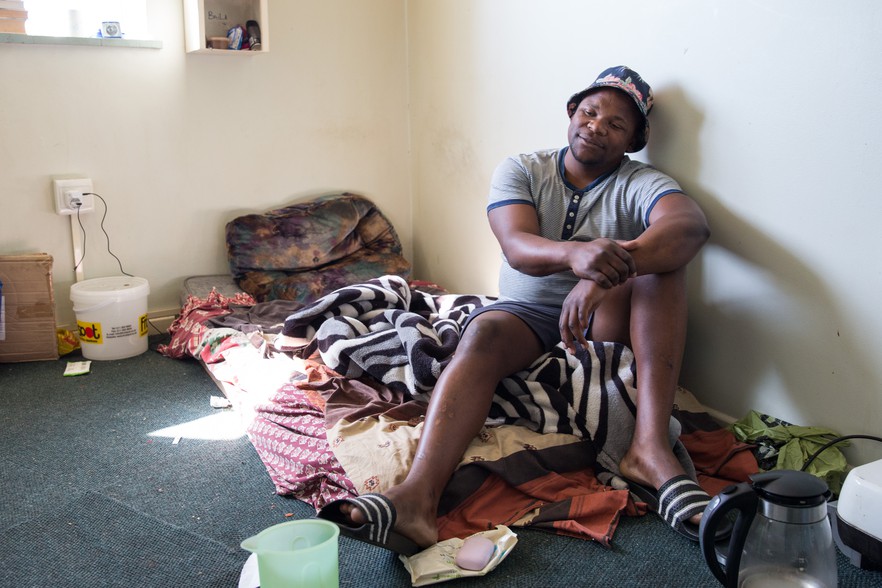 Bandile Gcuwa lives in the building with his three-year-old child. He was previously living in a backyard in Langa. Gcuwa said that the building was vacant for a number of months. “We were in need of a shelter,” he said. Gcuwa said he much prefers staying here as public transport and shops are nearby and it is safe. He said he makes some money working at an NGO that does social work. He also receives a SASSA grant for his child.

In its media statement the CPOA confirms that “the occupiers responded that they would not leave the building until alternative accommodation was offered by the government”. The occupants themselves told GroundUp that they were there to stay and had no intention of leaving.

The day after the meeting, a Sunday, CPOA made an urgent application to the High Court where the presiding judge granted an eviction order. A lawyer mandated by the occupiers responded with an equally urgent application for an interdict to suspend the eviction, which was granted. CPOA and the occupiers are now preparing for the next High Court hearing at which this will be challenged by CPOA.

The occupiers’ lawyer could not be reached for comment, but neither parties dispute the sequence of events.

Vuza said that Sheriff visited the premises ordering the occupiers to vacate within 24 hours. He only left when Vuza showed him the latest court order suspending the eviction. However, it is alleged by the occupiers that the very next day armed guards from a private security company entered the premises, milling about for approximately half an hour before departing having taken no action. It is not known whether they were called in by the new partial owner of the property or the CPOA. 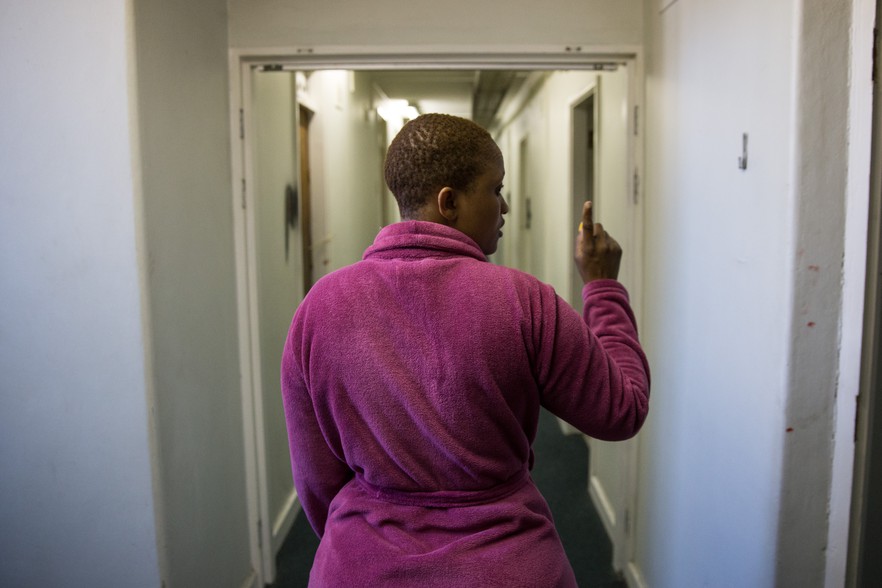 “The environment is better,” said Solonica Mbambani who is living in the occupation with her eight-year-old son. Mbabini was previously living with 15 others in a small cramped house in Langa. She said she had applied for governmental housing but received no response. She and her child survive off her child’s social grant. She said that she is an artist and volunteers teaching crafts such as working with papier-mâché.

One occupant expressed indignation at what was considered to be an unnecessary show of force. “They had guns, which looked like AK47s, and there were children around.” (The company had not responded to our questions by the time of publication.)

Vuza described how the occupants, now estimated at more than 200, slipped onto the premises in small groups, unnoticed – or perhaps deliberately ignored – by building security staff. The illegal occupants kept a low profile and it took about two weeks before their occupation came to the attention of CPOA authorities.

Singabalapa added that they had made a point of inviting the homeless who live on the streets of Cape Town city centre and who have recently been attracting police attention and fined for “obstructing pedestrian traffic” and breaking similar by-laws.

Hopefuls looking for a place to stay continue to arrive, but are told the home has reached its capacity. Their names are recorded on a waiting list, managed by Vuza and the committee, in case vacancies arise. 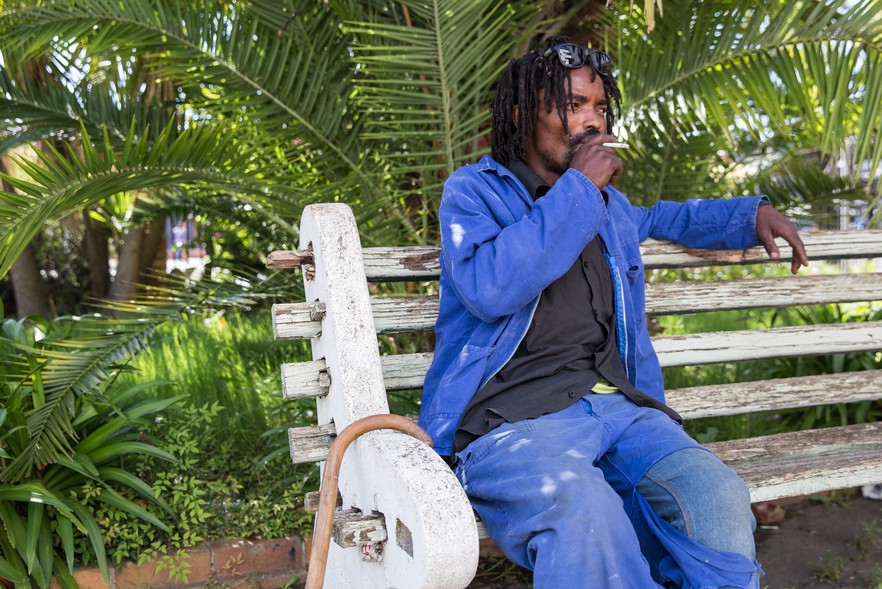 Sibusiso Amos Sidumo previously lived in Khayelitsha before ending up homeless. While in Khayelitsha, he said, he was robbed several times and shot in his right leg. He is now unable to bend his leg properly. Exhausted by crime, he left Khayelitsha to live on the streets in Sea Point and Ocean View for five years. He also tried staying in the mountains but says that he was continuously harassed and attacked by police and mountain rangers. He also has back injuries. Sidumo calls himself a “jack of all trades” but with his injuries he’s not sure if he’ll be able to do building work anymore. He currently has no income. He has been helping to fix things in the building and relying on family and friends for food. He has to walk with a cane.

The building, on Main Road, is practically a Cape Town institution. It has been run by CPOA, with subsidisation from the state, as a welfare home for elderly people who are unable to support themselves since 1957. At the end of 2018 it was decided there was a need to upgrade the property as it was considered unsound and posed health and safety hazards. It was reported at the time that residents and their families had been informed of this decision, and despite expressing some concerns, they had accepted CPOA’s assurances would be allowed to return to Arcadia Place. All the elderly residents have been relocated and are being accommodated in alternative CPOA homes until the upgrade is completed.

It has been confirmed that this process was completed with no hitches. Most residents have been moved to CPOA’s residential homes in the considerably more upmarket suburb of Pinelands. The last residents of Arcadia Place were moved out in February amid some fanfare as plans were released to upgrade the declining institution.

CPOA has confirmed that although the revamping will be a lengthy process, taking three to four years, they have promised former residents that they will return to the building and it will be able to accommodate a lot more people. The proposal for a revamped Arcadia Place includes the possibility of additional of four or five storeys.

Its new occupants, however, are not buying that. They believe Arcadia Place has been sold by the CPOA to a private developer. The aging building is well-placed amid burgeoning developments in what is clearly a gentrification zone where several upmarket blocks of flats are going up or are already completed. Flats are being sold or rented out at prices unheard of before in this area, which for years has mostly accommodated students and local poorer people.

Singabalapha members believe the building has been sold for an unseemly sum to one of the developers, and will in time be used to build more upmarket shops and private accommodation which would further reduce affordable social housing in the area. A CPOA staff member confirmed that a part of the property had indeed been sold. By the time of going to press she had not supplied any details about the intentions of the new owner. 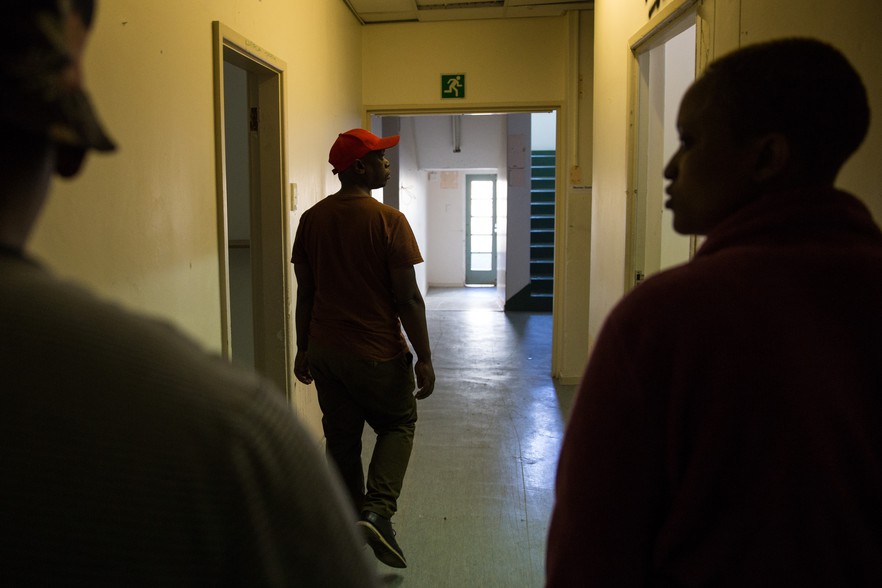 A wide variety of people have moved into the building. One woman described being in an abusive relationship with her boyfriend in Khayelitsha. “He hit me with a golf stick,” she said, and fractured her leg. She says that although there is a warrant for his arrest he is still out free. After ending the relationship, she said that she feared for her life and ran away. She was homeless for two years. “It was safer on the streets,” she said. Her son is currently in a safe house. She said that she feels safer living in the occupation.

Vuza confirms that they found the building in a derelict state and badly vandalised. The new occupants have been steadily at work cleaning it and making it liveable. She bemoaned the fact that there are no locks on the doors and none of the new occupants can afford padlocks.

Vuza said she had first noticed the vacant building in March, and had been keeping an eye on it. Under the impression that it is state-owned property, she argues that backyarders and others who have no homes have the right to occupy vacant property. She spread the word and soon the building, which had once housed 160 elderly people, was fully occupied.

She also reports that since the occupation had come to the attention of the owners, the water has been discontinued. One of the occupants, Bandile Gcuwa, added that the lights had also been switched off, although the plugs were still working.

Vuza appears to have occupied a fairly spacious room, which clearly doubles as a makeshift office to which visitors are directed and where queries are dealt with. Colourful cloths serve as curtains and a neatly made-up single bed stands in one corner. The rest of the room is occupied by chairs arranged into a kind of waiting room, and a table that serves as a desk.

A couple of occupants sit on one of the benches that have been left behind, enjoying the late afternoon sun. A couple of people who have jobs slowly start arriving home but most of the occupiers stay quietly in the background. Vuza says they have no intention of disrupting the neighbourhood and are doing what can to fit right in.

Next:  Elderly motorist doused with petrol in Dunoon taxi protests