Eskom does not have the right material to fix the problem 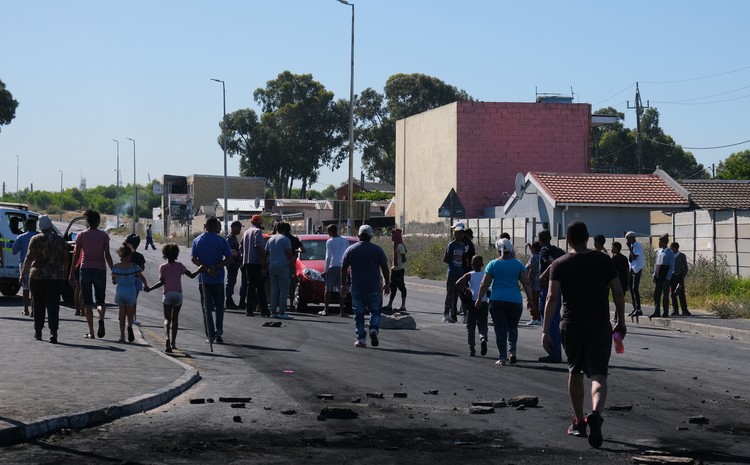 Blue Downs residents turn a car away that was intending to enter the neighbourhood. Photo: Daniel Steyn

Residents of Fairdale in Blue Downs blocked Hindle Road on Sunday evening and early on Monday with burning tyres after spending five days without electricity. Hindle Road was still blocked on Monday morning and cars trying to get through were shown away.

According to Eskom, a cable was stolen last Thursday, which caused the outage. The protesting residents told GroundUp that this is a regular occurrence. “Every time it’s the same cable,” Reagan Bewee said.

“This is the third time this year,” said Lissie Fourie. “We are pensioners, our fridges are broken now, and we need to take medication that has to be refrigerated.”

Residents say that they have had to throw away most of their food. There were also concerns that without streetlights, the area is not safe at night. According to residents, Eskom had come to fix the problem last week, but they did not have the right materials.

City PR Councillor Mzameki Sibunze said that because the area is supplied by Eskom, the City of Cape Town is unable to assist directly.

Sibunze said that he had been in contact with Eskom’s regional manager, who had told him that they are awaiting materials to fix the problem. The community did not accept this response, Sibunze said, and he will continue the conversation with Eskom. He said it is a matter of urgency that the issue gets resolved, otherwise the protest could escalate.

“While Eskom is doing everything to recover electricity supply as speedily as possible, the restoration time is still unknown, as Eskom is keenly sourcing material,” Eskom said in a press release on Monday morning.

Residents said that unless they receive a satisfactory response from Eskom, they will continue protesting.

Next:  Commuters say they are paying up to three times more because Metrorail is broken