Families want electricity bills from lockdown to be scrapped 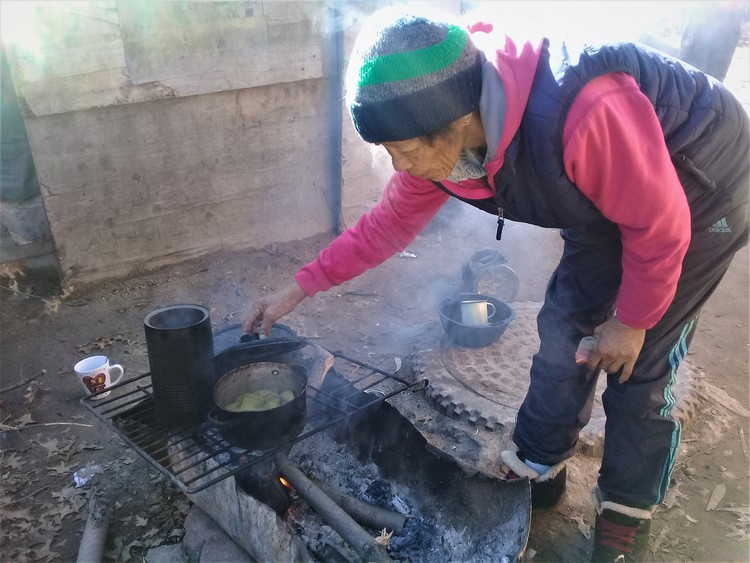 Francina Nero from Ceres cooks food and boils water over a wood fire because her electricity was disconnected. Her household is among hundreds that owe the Witzenberg Municiaplity large sums in outstanding bills. Photos: Marecia Damons

Residents of Ceres in the Cape Winelands say the municipality has ignored their pleas for leniency to repay large sums from their accounts in arrears.

Several residents have been struggling to pay their municipal bills since the hard lockdown in March 2020, and have had their electricity meters frequently blocked. With blocks placed on the meters, residents are unable to buy electricity until they pay the amount owed plus an additional fee for the block to be lifted.

When GroundUp visited Francina Nero, 55, at her home in Ceres, her home had been without electricity for more than two weeks. According to Nero, they paid to have the electricity reconnected, but a week after paying, it was disconnected again.

“It was barely on for three days before it was blocked again. They don’t even give you a clear reason for why the electricity is being blocked, they just block it.”

Without electricity, Nero has had to prepare meals over an open fire outside for the nine people she lives with. “Our neighbours complain about the smoke but we have to cook food for us and the children.”

Nero said if she isn’t able to cook everything during the day, she finishes preparing meals over the coals at night. “At night we have to sit around the coals for warmth because we can’t use heaters.”

Aletta Jantjies, 57, from Bella Vista said residents did not receive any municipal accounts during the hard lockdown and did not know how much they owed. “When the municipality re-opened, people were sent these huge bills for outstanding fees. Many people lost their jobs, so there wasn’t a stream of income and people only received money through government grants.”

“They were not able to pay off these large amounts. We’re still paying last year’s debt,” said Jantjies. Jantjies currently owes R14,649. Her only income is her monthly disability grant of R1,890.

Before the Covid-19 lockdown, Jantjies said she paid around R800 per month. She now has to make monthly payments of more than R1,000 which she cannot afford.

Jantjies said she borrows R1,100 from her sister monthly to reconnect her electricity and pay the fee to lift the meter block. “Sometimes we only receive our grants on the 7th or so, and it isn’t always possible to pay on the first of the month. So after the 15th, electricity gets disconnected.” 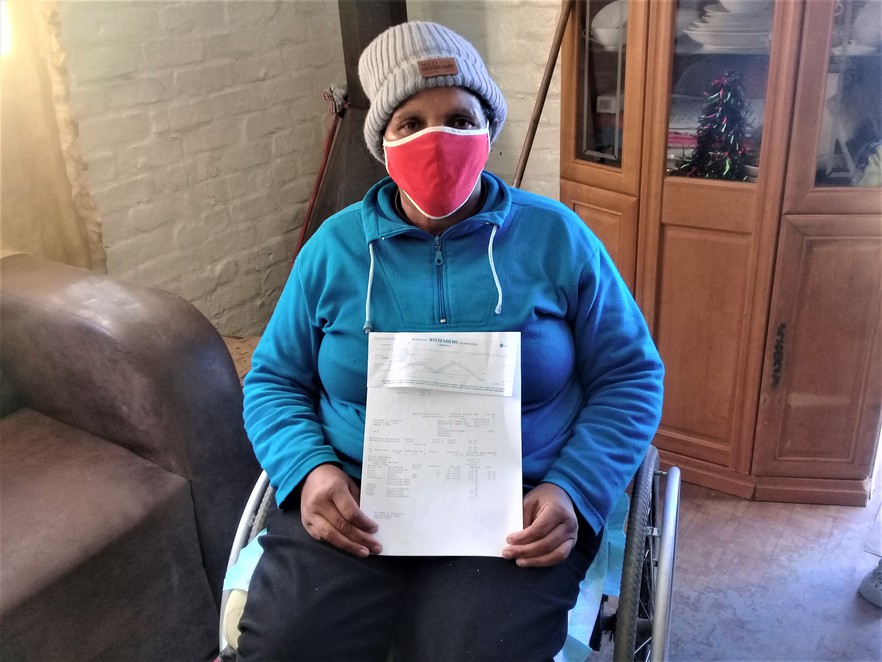 Aletta Jantjies from Bella Vista survives on a disability grant and says she is unable to pay her electricity bill of R14,649.

Wilbur Bergman, 36, said he made arrangements to help him make the monthly payments to the municipality. He owes more than R9,650 but can only afford to pay between R300 and R400.

Bergman takes care of his 65-year-old mother Katy Bergman who gets a pension of R1,890. He currently earns money through piecemeal jobs, which earn him about R300 per week, and R600 monthly rent comes from the tenants living in their backyard.

He also pays R220 per month for a driver to transport his mother to the hospital for her physio checkups, and to SASSA to collect her grant. “I cannot cope with the payments. So many residents are dependent on government grants. So how can they expect one household to pay almost R10,000?”

“One week our electricity was off because we couldn’t pay the account. I had to lie to my mother and say it was loadshedding,” he said.

The Witzenberg Justice Coalition has sent an open letter to the Witzenberg Municipality about residents’ outstanding bills.

Naomi Betana of the coalition said despite the mayor’s announcement on 9 July 2021 that a moratorium would be placed on electricity disconnections, “the municipality was still disconnecting the electricity of the elderly”.

She said the coalition had demanded that the municipality immediately reconnect electricity to all households and scrap account arrears.

Witzenberg municipal manager David Nasson said that while they sympathised with residents, the financial viability and sustainability of the municipality must also be considered.

On the coalition’s request for a moratorium on electricity disconnections, Nasson said, “There was a moratorium on credit control of all previously approved indigent customers whose subsidy period had lapsed.” Residents had until the end of August to renew their indigent applications, he said.

The indigent policy assists residents who are unable to pay full fees. “It is the responsibility of account holders to visit municipal offices to apply for indigent support,” Nasson said.

I live in Phoenix, Durban. I live with a family of 6 and our electricity bill is R85,000. We are all unemployed, although two people are collecting child support grants for three kids. I do part-time jobs to put food on the table but ever since the Covid came I could not get a job and now we are struggling to make ends meet. I am pleading with the government to please help me with my light bill!