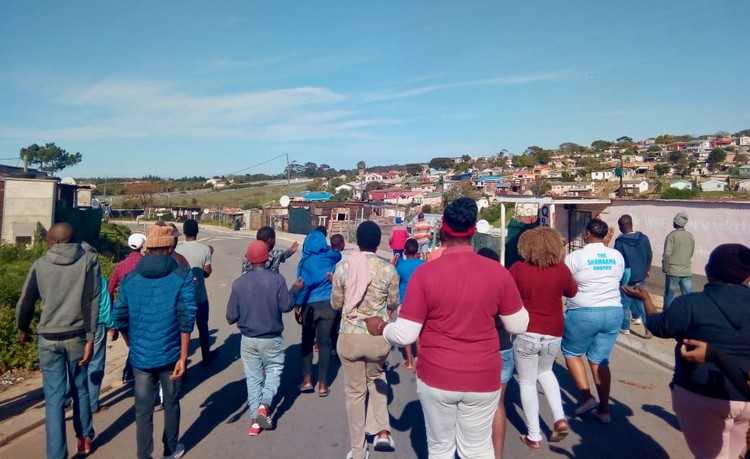 Residents of Qolweni informal settlement in Plettenberg Bay on their way to protest on the N2 over housing. Photo: Siphokazi Mnyobe

Protests erupted again on Monday in Plettenberg Bay and continued on Wednesday after community members said they were angered by the response they received from Deputy Mayor Sandiso Gcabayi (ANC).

The community of Qolweni, an informal settlement, are demanding to know when RDP houses will be built for them, what the budget is, which construction company is appointed, and how many people from Qolweni are on the beneficiary list.

Starting Tuesday last week, protesters burnt tyres on the N2 demanding to see Executive Mayor Peter Lobese. Petrol bombs were thrown on the road and rocks piled in the middle of the road. Traffic on the N2 between Plettenberg Bay and Knysna was diverted via Airport Road at Kranshoek and Wittedrift.

The protests were suspended over the weekend in anticipation of deputy mayor Gcabayi addressing the issues.

Gcabayi was accompanied by police and a police Hippo vehicle to a 6pm community meeting on Monday. Gcabayi said he was not the appropriate person to give the news or further details to the community on the RDP plans.

Community leaders then met at 8pm with community members, who expressed their dissatisfaction with Gcabayi’s response. Protests on the N2 resumed that night, stopping traffic until Tuesday, when drivers were allowed to do the morning school run. Protests resumed later, with police firing rubber bullets and tear gas and clashing with the protesters.

Community leader Nolubabalo Ndamane said she has lived in Qolweni for over 22 years. She lives in a one-room shack with her two children.

“The municipality does not respect us at all. We have lived like pigs for years now. We demand to know why there has not been development in our community … We walk in streets full of sewage every day. We even got used to the smell,” she said.

Communications manager for Bitou Local Municipality Andile Namntu said the delay with Qolweni is that the land did not originally belong to the municipality, but had to be purchased.

A transitional relocation area was being set up next to Robberg Seafood in Bossiesgif. Construction of 169 RDP houses would commence after people were relocated, and this should be within the municipal year, ending July 2021, he said.

Southern Cape police spokesperson Sergeant Christopher Spies said police were still monitoring the situation and would remain until order was restored. No arrests had been made yet.

Next:  Covid-19 has made inequality worse, researchers find