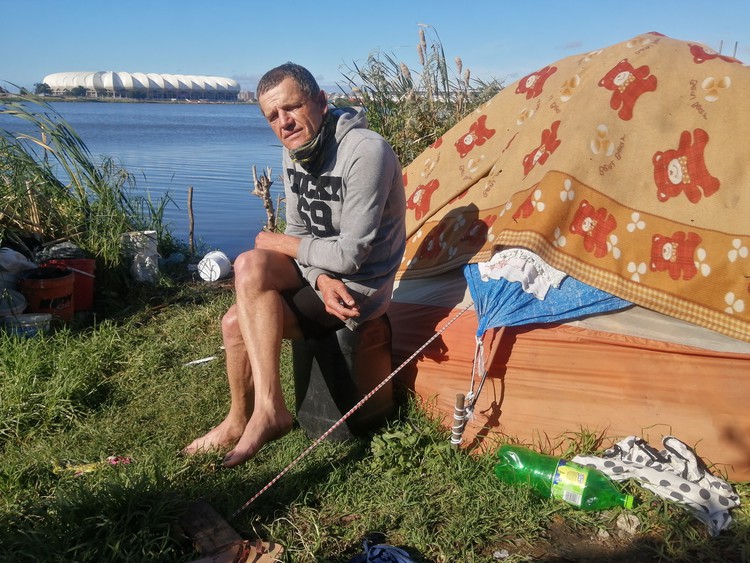 William Watkins, 60, lives near the North End Lake in Nelson Mandela Bay. He says he would like to get the Covid-19 vaccine but does not know how to go about it because he does not have an ID. Photo: Mkhuseli Sizani

The Eastern Cape Department of Health says it’s boosting efforts to register people for the Covid-19 vaccine who are homeless and over the age of 60.

However, when GroundUp spoke to a few elderly people who are homeless in Nelson Mandela Bay, they said that the department had been neglecting them.

William Watkins, 60, has been living near the North End Lake since 2000. He said that during the first surge of Covid-19 infections last year, he had become very sick for almost a month.

“I was lying flat in this tent. I lost my sense of taste and smell. My body was heating and joints were very sore. I couldn’t even scavenge for food and collect bottles to sell for money,” he said.

Watkins said when he regained some strength, he managed to collect material worth R50 to buy some medication to help alleviate his symptoms.

“Not a single health official ever visited us here. Only municipal officials came and threatened to evict us. They claim we make this place dirty,” he said.

Asked whether he would be getting the vaccine, Watkins said he didn’t know where to go. “I really don’t know where to start in order to get enrolled for the vaccine. I am scared of being infected again. Government should also prioritise us like all other elderly people. We don’t have home addresses, cellphones and IDs,” he said.

Solomon Mtsitsi, 65, is disabled and lives under the bridge between Freeway Road and N2 in Sydenham. He said he was not even aware that there is a Covid-19 vaccine. “The only thing I learned is to always wear my mask, wash my hands with soap regularly and keep a social distance. I learned that from the donors who normally bring us food, masks, soap and sanitisers,” he said.

Mtsitsi said it was difficult to wash his hands often because he had to beg for water at a nearby factory.

Solomon Mtsitsi lives under the bridge between Freeway Road and the N2 in Sydenham. He was not even aware that there is a Covid-19 vaccine, but wears his mask and washes his hands as much as he is able to. Photo: Mkhuseli Sizani

Mongezi Dikana, 62, lives under the bridge in Grahamstown Road with more than ten other people. He said social workers visited them in February and gave them masks. “We always wear masks because in nearby factories you don’t get a piecemeal job if you are not wearing a mask. We don’t know what a vaccine is because no one has ever come and explained it to us,” he said.

However, Sizwe Kupelo, provincial Department of Health spokesperson told GroundUp that 34 more staff had been hired to do door-to-door registrations. In some areas, community health workers would be assisting people over 60 to register.

Asked about details of the plan to vaccinate people living on the streets without documents, Kupelo merely said the department was “beefing up teams” to reach homeless people, but refused to give more details.

Next:  Wheelchair users struggle to use sewage covered, pothole-ridden roads in Dunoon