“We are hungry. Our pots are empty” 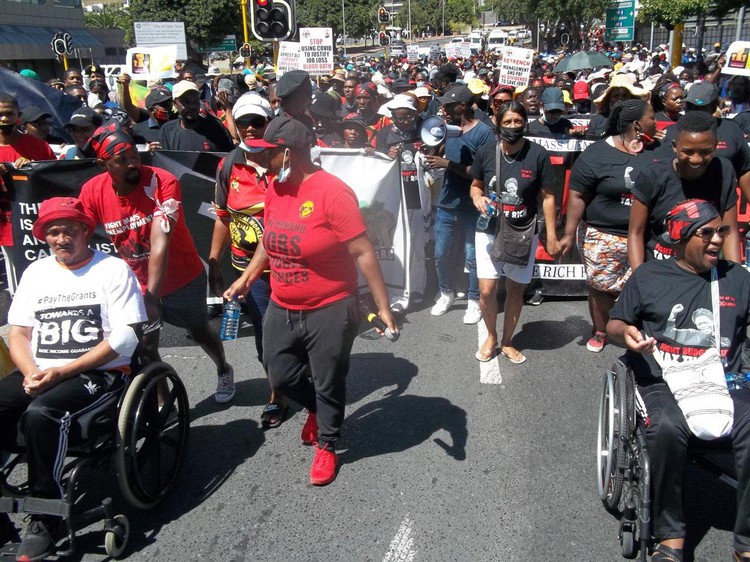 People marched to Parliament under the banner of the Cry of the Xcluded movement on Wednesday. They demanded that the government find urgent solutions to high unemployment in the country. Photo: Vincent Lali

Hundreds of people marched through Cape Town’s city centre under the banner of the Cry of the Xcluded movement on Wednesday. They are demanding Finance Minister Enoch Godongwana find urgent solutions to high unemployment.

Bridget Nkomana, who led the march, said: “We are hungry. Our pots are empty.”

According to the movement’s memorandum of demands, they want the government to introduce a basic income grant of R1,500 to assist vulnerable households and cushion the impact of high unemployment.

During his budget speech on Wednesday, Godongwana said 46% of people in the country receive social grants.

He announced a cash injection of R58.6-billion in the medium term to “provide for inflationary increases” to permanent social grants. He also confirmed that the R350 Covid Social Relief of Distress (SRD) grant will be extended for another 12 months, at a cost of R44-billion.

Meanwhile outside Parliament, protesters called for the government to have proper and meaningful consultations with communities.

“We need a unified health system so that all South Africans can have access to quality healthcare without discrimination based on gender, age, race, HIV status, or income,” the movement’s memo stated. They also called for more progressive land reform and for a wealth tax on the country’s richest 1%.

A senior official from Treasury came out to accept their memorandum.

The group also marched to the Civic Centre with members of the South African Municipal Workers Union (SAMWU), among other groups. They want the City of Cape Town to fill “10,000 lower-level job vacancies”.

Union members also called for the dispute over firefighters’ working hours and “advancement of workers through natural progression” to be resolved.

According to TAC’s memorandum, the City has been closing clinics without consulting residents.

The City’s Justice Nedzamba accepted the memos and promised to give them to the mayor for consideration.

Next:  Cape Town Central Line to return to service in December, says PRASA

Previous:  I beat an antibiotic resistant infection - but only just