Surviving from a Pretoria rubbish dump

Cry Makuni and Prisca Chauke each push a wheelbarrow from their home in Plastic View informal settlement next to Soshanguve Extension 6 in Pretoria. The area is home to about 42 households, most of whom survive on waste picking from the nearby Rosslyn landfill site. Photos: Mosima Rafapa

It’s just before 11am on a Tuesday and 36-year-old Cry Makuni and 27–year-old Prisca Chauke are rushing down a dirt road, each pushing a wheelbarrow filled with recyclables.

The women, from Zimbabwe, live in an area known as Plastic View informal settlement next to Soshanguve Extension 6 in Pretoria. The area is home to about 42 households, most of whom survive on waste picking.

“We are very poor at home [Zimbabwe]. Life here is better. I struggle to help my mother but whenever I can, I send money home,” says Makuni.

Chauke and her daughter aged five share a one-room shack with Makuni and her two children. Both women rely on waste picking to survive. They spend most days collecting recycling material from houses and shopping centres in Soshanguve, some 13km away. They sell these items to the Rosslyn landfill near the settlement. For a bag filled with plastic containers and tin cans, which usually takes them two days to collect, they make about R150.

The land where Plastic View is built is owned by EnviroServ, one of South Africa’s largest waste management companies.

The small community was dubbed Plastic View because the first few occupants built their structures using plastic sheets more than two decades ago. Years later, more people have moved onto the land with homes constructed with mostly zinc, wood and tent material.

Most of the current occupants come from Hammanskraal and Brits in the North West and others are undocumented migrants from Mozambique and Zimbabwe. There are no toilets, running water or electricity in Plastic View. A handful of residents have dug their own pit toilets near their homes and say they cook using wood and fire or paraffin. The City of Tshwane has also said it cannot assist the residents while they live on privately owned land.

They say residents living in RDP homes opposite the settlement charge between R1 and R5 for a 20 litre bucket of water. 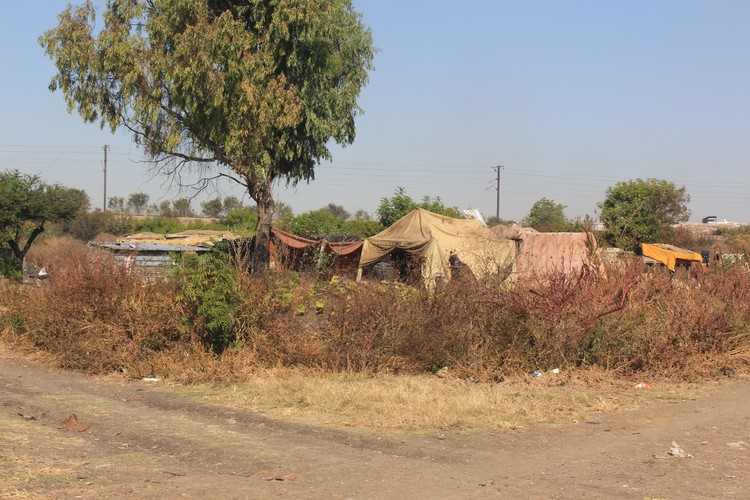 Most of the homes at Plastic View informal settlement are made with zinc, wood and tent material.

Another resident, Dina Sibanyoni, 57, has worked as a waste picker in the area for more than 30 years. She says she started collecting waste decades ago after her brother discovered a place in Rosslyn where copper and aluminium waste was discarded.

Sibanyoni says they used to sleep near the landfill to be closer to where they could sort their material. “We were forced to move from the landfill because law enforcement said it was hazardous. I was one of the first people who established Plastic View … Before, we’d sleep in the bush, making structures out of old plastic sheets,” she says.

Sibanyoni says her family still relies on picking waste. Three of her children, her brother and sister also collect waste material. “My sons have their own shacks here and they also sell items at the landfill,” says Sibanyoni.

Dalcy Kgomo, 54, from Limpopo in Ga-Matlala moved to Pretoria in 1999. Through waste picking, she was able to support six of her children and put them through school over the past 16 years.

She moved to Plastic View informal settlement in 2010, where she currently lives with her partner. “It’s painful the way we live but we’re glad to be closer to the landfill. Our biggest obstacle is living without water. We have to buy water so we can wash or do laundry properly,” she says.

She says that during winter they have supper as early as 4pm because it is so dark. Kgomo says she has an RDP house. Her children live in it.

EnviroServ confirmed it owns a portion of the occupied land. The company says that it has engaged with the municipality about the occupation and that a decision was taken to provide the residents with an alternative site. But as far as we could tell there are currently no known plans to move the residents of Plastic View. 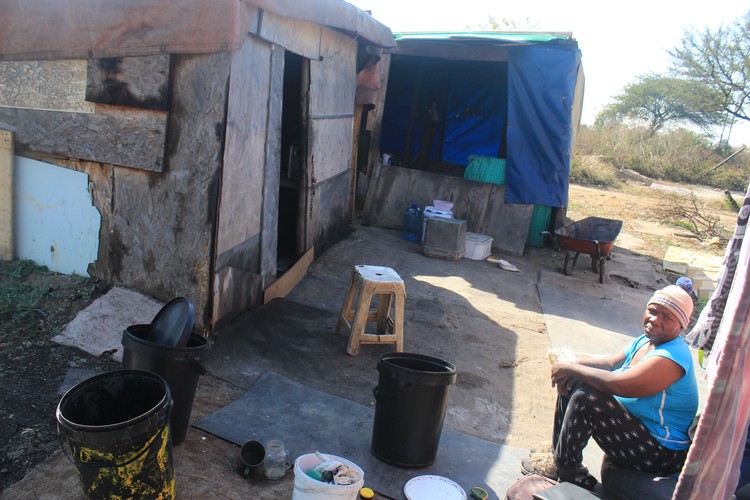 Dalcy Kgomo has lived in Plastic View since 2010. She says through waste picking, she has been able to raise and educate six of her children.

Previous:  No ambulances for two months in Eastern Cape districts