Villagers want authorities to build a wall to divide them

Two neighbouring villages, Zitha and Sicamba in the rural Eastern Cape, have been feuding since last year.

In December a man from Zitha was murdered. No arrests were made and police do not know if his killers were from Sicamba. But in March tensions reignited when 14 homes were torched and then another 28.

Exactly what lies behind the arson attacks is not at all clear. But scores of displaced families, mostly women and children, have had to be housed at a local church hall. The Department of Social Development has been providing food, blankets, and counselling.

Mshibiliki Valela of Sicamba said, “I have lost everything. My home and all my belongings are gone. I don’t even have a teaspoon to my name.”

But he said he was prepared to forgive the perpetrators. “This fighting must stop because what people are fighting over does not make any sense,” he said.

“Traditional leaders and the community at large want peace. We as the police have opened cases of arson and murder. Many people are still in hiding in the surrounding hills and forests – that has slowed down our efforts to arrest the perpetrators,” said Tonjeni.

Mxolisi Magidigidi, from nearby Ngonyeni village, said, “The police must find the root of all of this and the guilty parties must be brought to justice. The police must not play favourites. Whoever is stoking this fire must be arrested and prosecuted – be it the chief, a headman or an ordinary community member.”

The two villages are separated by a road, but community members from both villages say they now want a physical structure, be it a wall or a fence, to separate them and form a firm demarcation line between the villages. No person from Zitha will be allowed to cross to Sicamba and visa versa. But Chief Sonwabile Jama has said he cannot separate his people.

On Tuesday, a mass meeting was held at Kwakhanyayo Great Place, an intervention by various government departments and traditional leaders. Community members from both sides voiced their wish to live in peace.

Ingquza Hill Local Municipality Mayor Bambezakhe Goya said, “Bringing peace to people who are at war will not be done in one day.”

He said the feud stemmed from a disagreement over the boundary between the two villages. He said that there were also two other issues, but he refused to say what they were “at this time”.

However, villagers told GroundUp that Jama’s chieftaincy is being challenged and that he has also been accused of misappropriating funds.

Speaking on behalf of the Khanyayo royal house, Nontlanga said traditional leaders will help Jama bring peace. “We as his family have asked him to give up all business interests and focus squarely on leading his people. We hope that will bring and sustain peace here.” 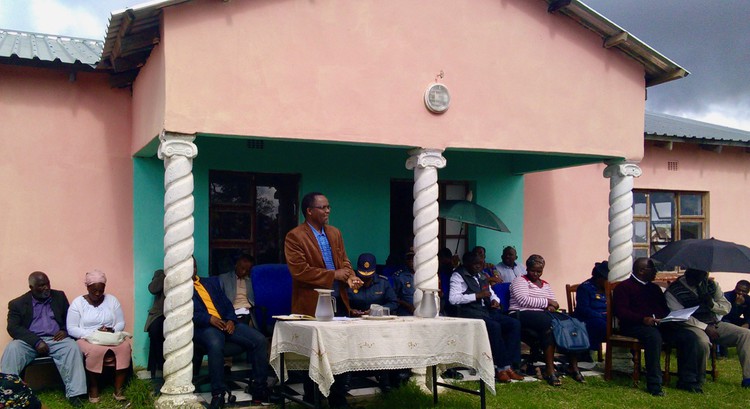 Next:  Farm workers accuse Department of Labour of neglect