UCT fire: students tell how they grabbed textbooks and laptops and fled

“Some people didn’t have shoes on, others ran out in pyjamas” 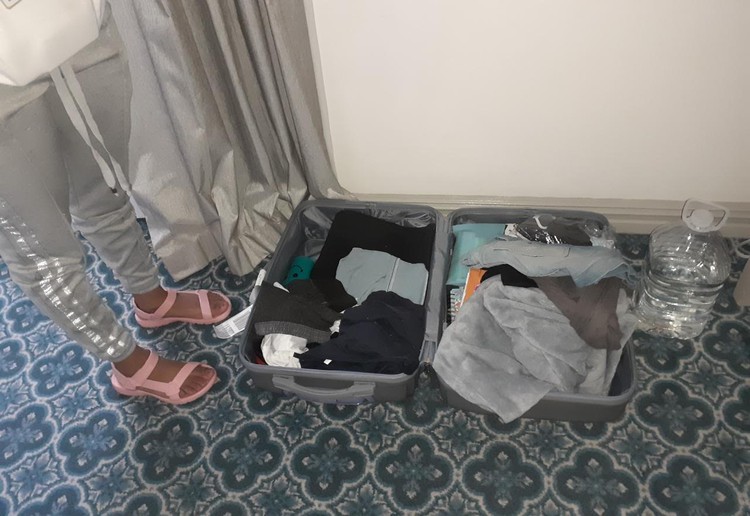 Some students managed to pack a suitcase; others just had time to grab their laptops and run. Photo: Marecia Damons

Second-year student Elizabeth Pretorius was busy preparing for a Sociology tutorial on Sunday morning at her student residence, Graça Machel Hall, when the fire broke out which was to tear through the University of Cape Town campus and spread across the mountain.

“It was a normal Sunday morning. I made plans to go out for ice cream with one of my cousins later that day.”

“I just heard helicopters outside, but I thought nothing of it. Around 9am I started smelling the smoke from my room, but I didn’t think it would spread to campus and come this far. So I closed my window, because the smell of the smoke became overwhelming, and I continued working.”

Pretorius said they were alerted on WhatsApp group chats that the residences on the upper campus were evacuating and that they would be notified if they also needed to leave. Then they received an email from UCT explaining that they had 15 to 20 minutes to vacate the premises.

“The fire alarms went off and an announcement was made over the intercom that there was a fire on campus.”

“I grabbed a bag and packed in my laptop because I was thinking of all the assignments I still had to do. I grabbed my student card, matric certificate, study notes, a file with all my personal information, a bottle of water, pain medication, my phone and charger.”

“I only took those, because I thought we’d be back in three to five hours at most.”

Pretorius is a fire marshall at her residence. Before she could leave, she first had to inspect the other rooms to see if everyone had left.

“We’ve done several fire drills at res, so most of us knew where the emergency exits were. Getting out of the residence went quite smoothly, but the moment we got outside everyone started running in panic. People outside were crying. Some people didn’t have shoes on, others ran out in pyjamas, some were half-dressed.”

“When I saw people running with suitcases, I got stressed, because I’d only left with the clothes on my back: a spaghetti top, jeans and sandals.”

“The smoke was overwhelming, and our eyes were tearing up from it. I had difficulty breathing because I was wearing my mask and also inhaling smoke.”

“Some people lost their phones on the staircases while they were running, but there wasn’t time to go back and fetch them. Most people I saw ran out with textbooks.”

“My mom called and then my dad, because they saw the reports that the fire was getting out of hand. I didn’t fully process what was happening, I was just focussing on getting out of there.”

UCT is now planning the return of the 4,000 students who were evacuated from residences during the fire.

In a statement on 21 April, UCT said that the process of assessing the health and safety of students returning to campus is underway. Vice-Chancellor Professor Mamokgethi Phakeng said that UCT would “make alternative arrangements for those residences deemed unsafe due to fire damage”.

“Our priority is the safety and health of every student, and to create the conditions necessary for a full return to the university’s academic programme as soon as possible,” said Phakeng.

UCT SRC member Gisella Shaer said some of the students would move back into residences on Thursday. “But also it all depends on fire marshals… and that it is safe for students to return,” said Shaer.

Smuts Hall and Fuller Hall on the upper campus were damaged in the fire.

A student from Smuts Hall, who didn’t want to be named, told GroundUp he did not get a chance to grab anything during the evacuation. He said everything happened very fast. He was sleeping when the evacuation started and was shocked when he walked outside and saw the fire.

“We were quick; we had to grab whatever we could. But I didn’t get a chance to,” he said.

Tshiamo Modise who was living at Tugwell Hall, said she was able to pack most of the stuff she needed, but not everyone in her residence got the chance to do so. She said the evacuation went smoothly but she was worried about a test later this week.

“I am stressed about what is going to happen for the next few days,” said Modise. “They’re telling us not to stress.”

Next:  Protesters call for CCMA budget cuts to be reversed