“How can I cast my vote when I’m sharing stream water with dogs and cows?”

“How can I cast my vote when I’m still sharing stream water with dogs and cows?” asks Zwelihle Zimu.

He is one of the residents of Sweetwaters in Ebaleni in Pietermaritzburg who fetch water from a nearby stream. There are no communal taps and the water tanker comes only once a week, says Zimu.

“We fetch water from a stream in the bushes. Some of the dogs swim in that stream. Cows and goats drink from the same stream. The water is dirty. We have no choice but to use the same water.”

In winter, he says, when darkness falls early, it is dangerous to walk to the stream.

When GroundUp visited the stream, which residents call “Emhosheni”, a dog was in the water, drinking. 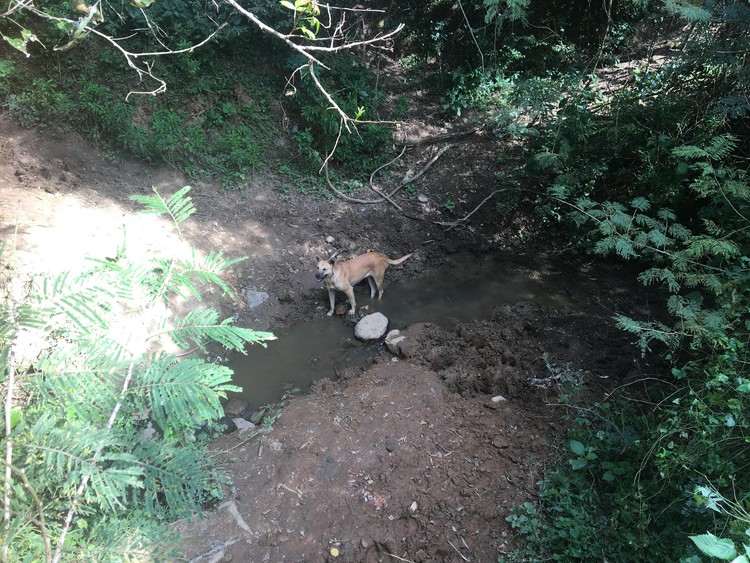 The stream is shared with animals. Photo: Nompendulo Ngubane

Zimu says some residents buy water from a house in Zayeka, some distance away.

He takes his car and brings back eight containers which lasts him four days. But others do not have money or transport, he says.

Maboni Ngcobo says neighbours living higher up throw rubbish into the stream. “Sometimes we have to clean up that rubbish and wait hours for the water to clear before using it.”

“The one water tanker is not helping. Some of us are not always at home when it arrives. The only way we are able to get water is from the stream,” said Ngcobo.

She says she is not going to cast her vote.

“It has been over 20 years. We have raised the issue with the ward councillor. He is aware but nothing has been done. I’ve been voting all these years hoping for change. I’m not going to waste my time,” Ngcobo says.

Ward councillor Linda Madlala (ANC) said he had raised the matter with Msunduzi municipality. The municipality had been placed under administration, he said, but there was a plan to put in standpipes and rain tanks and eventually bring piped water to the area.

“No human being deserves to drink water with animals. We need access to clean water,” said resident Mandla Gumede.

Previous:  We campaigned for the ANC as instructed, but we never got the promised houses, say East London families