The “Friendly City” is filthy 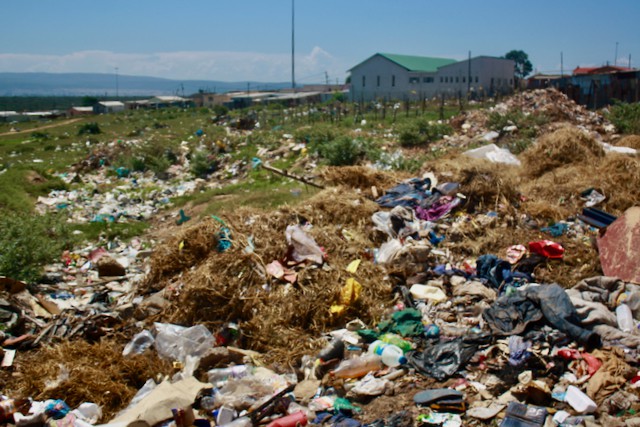 Rubbish is piling up at the back of the Seventh Day Adventist Church in KwaNobuhle. Photos: Thamsanqa Mbovane

A terrible stench hangs about the “Friendly City” as solid waste and garbage piles up in Nelson Mandela Bay. Out of 36 municipal refuse collection trucks, only 11 are operational. The rest are in for repairs.

Refuse collection has been affected in Motherwell, the Northern Areas, Straunway and Uitenhage.

Municipal spokesperson Mamela Ndamase said on Tuesday that the City has approved an “emergency deviation” to hire 16 more refuse compactors.

“We want the municipality to clean up this city,” says Themba Tini, the director of Tini’s Funeral Services in KwaNobuhle, Kariega. Rubbish is strewn all over the township’s six wards.

“Our funeral parlour is infested with flies,” says Tini.

His business was established in 1985. Now he is worried that the rubbish piling up around the mortuary will mean he fails health inspections.

Tini says his staff clean every day around the building but they can’t keep up with the constant dumping.

“People dump litter because the municipality doesn’t collect waste from wheelie bin-using residents on a daily basis as required,” he said.

Mayco Member for Public Health in Nelson Mandela Bay Councillor Thsonono Buyeye said, “We have noted the backlog caused by the shortage of refuse compactors and can assure residents that the matter is receiving urgent attention.” 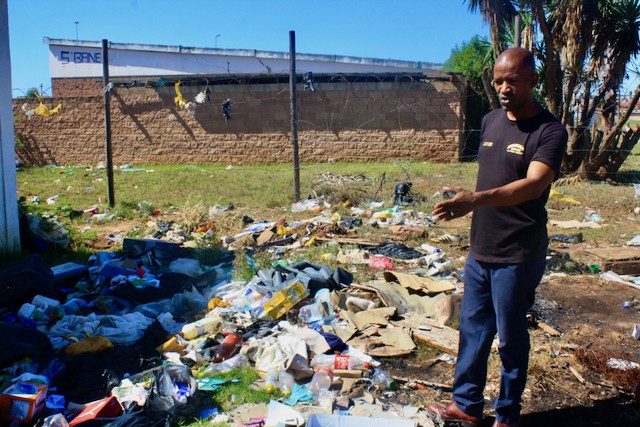 Themba Tini of Tini’s Funeral Services in Kariega says that people dump rubbish illegally next to his funeral parlour on a daily basis and it is threatening his business.

Next:  Taps have finally been installed in this settlement, but there’s no water in them