The materials will now be returned to the intended community 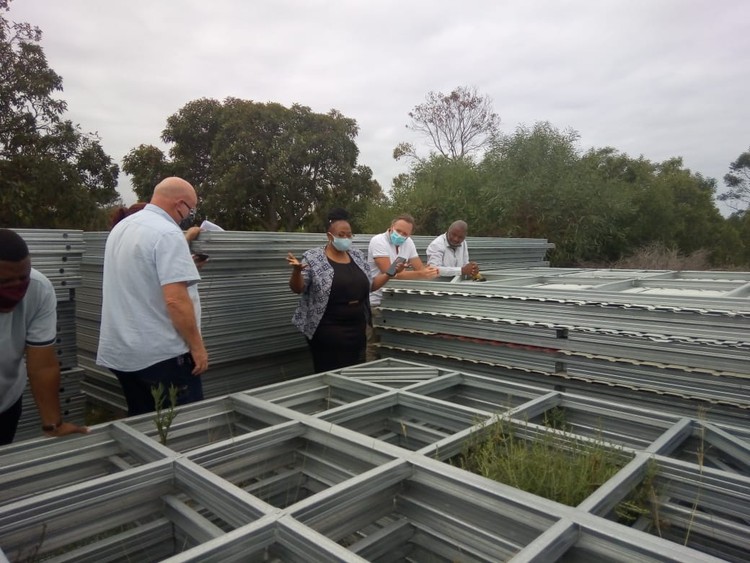 Western Cape spokesperson on Human Settlements Matlhodi Maseko questioning a delagation of officials from the Bitou Municipality on Wednesday during an oversight visit by the provincial standing committee at the site where R4-million worth of temporary housing building material has been lying since 2018. Photo: Siphokazi Mynobe

The DA’s Western Cape spokesperson on Human Settlements gave housing officials from the Bitou Municipality a tongue lashing during a visit to the site where R4 million worth of temporary housing building material has been lying since 2018.

The material, being kept on vacant land at the airport in Plettenberg Bay, was meant to be used to create a Temporary Relocation Area for 71 households, whose homes were gutted by fire in June 2018.

GroundUp reported in November last year that Treasury allocated R3.9 million to the Municipality Emergency Housing Program for the establishment of the TRAs. But the municipality had already supplied emergency materials for fire victims to rebuild their shacks. Disagreements in the community at the time resulted in most of the building material being dumped, even though not all of the fire victims had received material.

“The Bitou Municipal report says the material was taken away from the community to be kept faraway because they didn’t want people to start stealing the material,” MPP Matlhodi Maseko told the delegation of the provincial standing committee on housing as well as Bitou municipality officials during an oversight visit on Wednesday.

According to the municipality, after the community rejected the material, it planned to give the material “to people living in dire conditions”. Maseko said that the space where the material was initially to be kept was too small.

In response, Ward 1 Councillor Jessica Kamkam said that some of the disagreement with the community came when some people said they would only move to RDP houses and not temporary accommodation.

Maseko insisted that the material be assembled and taken back to the community. A team from the municipality must check in July that this has been done, she said.

The municipality’s Onke Rwayi and Misiwe Mpahlwa explained that on Monday they gave Nzuzo Pty Ltd construction company the go-ahead to start putting the material together for it to be taken back to the community.

They said the construction company had committed to finishing the project. However, there is no time frame on when the project will start.

At the site, airport security guarding the material pointed out several items that have been damaged by heavy rains or blown away by the wind.

Next:  Right to die: Dying doctor’s testimony to be heard in camera