Dispute over future of SANRAL land

About 100 property owners in Strand, Cape Town, picketed at the municipal buildings on Thursday afternoon. They demanded an explanation from the City of Cape Town about an apparent agreement reached between SANRAL and the City on providing services to people occupying SANRAL-owned land near their properties.

The protesters says that their property prices will drop if informal structures are built close to their homes.

“These are houses with bonds. What is going to happen to our property value if structures are built there?” asked organiser Phillip Versfeld. He said they had obtained information on an agreement between the City and SANRAL which describes the City’s intention to provide services to people who build on the land.

“According to our information, talks started back in 2014 without consulting us the ratepayers. We marched here on Monday to demand answers. We sent an email so we are here back again,” Versfeld said.

Marius Yzelle said he hoped the matter would be sorted out. “We are hoping that no building will start on the SANRAL-owned land. The property value must be protected and we want this matter to be sorted. These are people’s homes, investments. The City must stand up for residents.”

Deputy mayor Ian Neilson, as well as Mayco Members Malusi Booi and and JP Smith were present to accept the memorandum. Addressing the crowd, Neilson denied the City was planning to provide services for people occupy the land. “You can look at our budget. We have not made any provision for any services. It looks like SANRAL went to the public without consulting us first.”

The sceptical residents disrupted Neilson and Smith as they tried to speak.

The property owners protest comes in the midst of about ten days of protests by shack dwellers trying to occupy land in Strand. A small group of people who wanted to build on the SANRAL land were stopped from marching on the property-owners protest by police. One of them, Mkhululi Silatsha, said: “We are the ones who want to build on that land. The deputy-mayor is quick to come here and accept memorandums but our area has been burning for over a week. White privilege is at play here and we will not allow that.”

The land in dispute was earmarked to be part of a national road. This plan was disrupted in the 2000s when homes were built upon it.

Speaking to GroundUp after accepting the memorandum, Neilson said SANRAL did not follow due process. “SANRAL did not consult the City and made incorrect statements. They created a problem for us.” When asked what the way forward was, the Deputy Mayor said: “We are going to make SANRAL follow the process before we can make any decision on the land.”

Structures on the SANRAL land were demolished on Thursday. SANRAL Western Cape manager Randall Cable confirmed that they SANRAL was responsible for the execution.

“The Housing Development Agency (HDA) and the City of Cape Town are engaging with all relevant stakeholders including SANRAL as the landowner. SANRAL’s mandate is to build, develop and manage the road network. Human Settlements falls outside the scope of SANRAL’s mandate and as such, allocation of land, relocation of people and relaying of basic services are addressed by the HDA, City and provincial authorities,” Cable said.

“SANRAL is therefore not allocating land to anyone and has, along with the relevant law enforcement agencies, acted in accordance with a court order, to have land invaders removed from the land intended for road building.”

Cable confirmed that there are talks to provide land. He said the HDA is discussing with the community the possibility of relocating the occupiers to a vacant site within the Pholile informal settlement until they can be housed elsewhere.

Who are the people who want to build on the SANRAL land?

Former Mayor Patricia De Lille approved the electrification of Pholile. This is currently underway. But some shacks do not qualify for getting electricity because they are under powerlines or too near municipal pipes. It was agreed that those houses would be moved to another piece of land. Discussions started with SANRAL to do this as plans for the road appeared to have failed.

Silatsha told GroundUp: “Meetings have been ongoing and SANRAL admitted that their plans for building a road cannot go ahead as they would have to move people to other areas. The meetings were held in the presence of City officials but today they deny everything.”

Meanwhile, also in Strand on Thursday, demolition of structures continued on the ASLA-owned land opposite Reddam House school. The structures have been erected as part of land occupations over the past weeks. Private security has now been deployed to guard the land 24 hours a day. 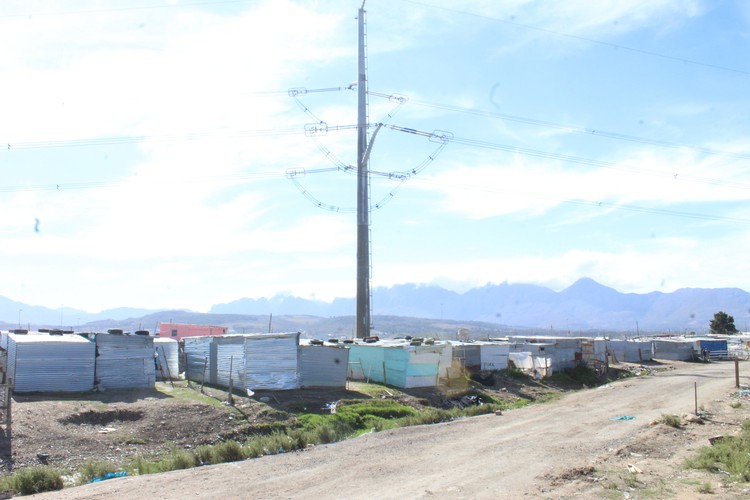 These shacks, which are under the powerlines, are to be moved to new land. There are also stormwater pipes here. Photo: Velani Ludidi