Police ministry and SAPS continue to fail the vulnerable and the poor, says activist

Five years after the Khayelitsha Commission of Inquiry into policing released its findings and recommendations, the site where a police station is supposed to be built in Makhaza, still stands empty. The site is overgrown with weeds and grass and strewn with rubbish.

Delivering his budget speech in Parliament in May 2018, Minister of Police Bheki Cele said Makhaza would get a station by 2022.

On Monday, to mark five years since the Commission made its recommendations, the Social Justice Coalition (SJC) together with residents of Makhaza occupied the vacant site and started building a wall, using concrete bricks and cement, in the centre of the land.

SJC deputy general secretary Mandisa Dyantyi said, “The three current police stations in Khayelitsha … are not enough to carry the burden of crime in Khayelitsha.”

Dyantyi said the police ministry and the South African Police Service were continuing to fail the vulnerable and the poor.

Veronica Welem, resident in the area since 1993 and a member of the Ikamva Lethu Neighbourhood Watch, said people had to pay R40 for a taxi to report crimes to Harare police station. She said it was difficult for Harare police to service a big area like Makhaza on top of the other areas they have to patrol.

“We manage to catch the criminals at night [on patrols], but then we have to call Harare police station and on top of that we have to wait a while till they get to us. In many instances, the criminals we catch manage to get away,” said Welem.

The SJC has highlighted the need for visible policing, more human resources for police in the area, CCTV cameras, improved infrastructure and public lighting.

Police promised to respond to GroundUp on Monday. Comment will be added when it is received. 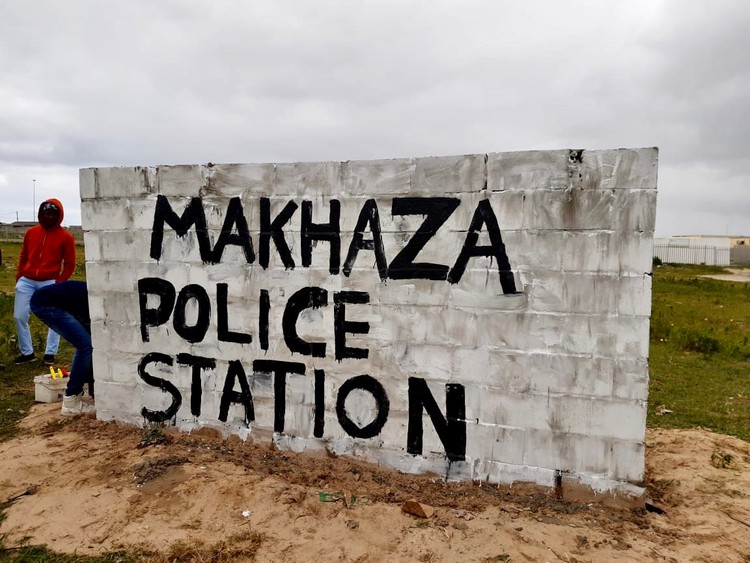 To mark five years since the Khayelitsha Commission of Inquiry recommended a police station be built in Makhaza, the Social Justice Coalition and residents built a wall on the building site. Photo: Sibusiso Mdlankomo

Next:  “We turned an unused building into a place many now call home”

Previous:  Is Melissa Whitehead a principled civil servant or a “cowboy”?