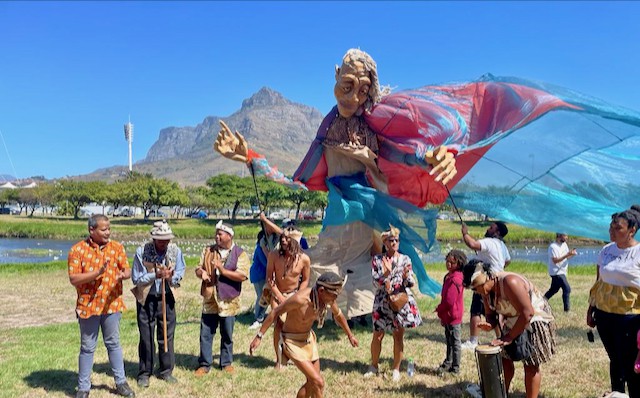 A tall puppet of the River Spirit towered over a cleansing ceremony on the banks of the Liesbeek and Black rivers on Human Rights Day. Photo: Susanna Coleman

A stand-off took place on the banks of the Liesbeek and Black rivers in Observatory on Monday between First Nations groups with opposing views on the future of this land.

Invitations to a ceremony from the Observatory Civic Association and the Goringhaicona Khoi Khoin Indigenous Traditional Council had already been sent before the interdict was announced. Spokesperson for the Goringhaicona, Tauriq Jenkins, said the “cleansing ceremony” was an interfaith effort to to “stop the River Club destruction”. He said the ceremony would bless the rivers and the floodplain, considered sacred land.

But the event turned into a stand-off between the organisers and the First Nations Collective, who laid claim to the “Mound” at the Two Rivers Urban Park in Observatory. The mound has served as a regular site of protest over the development.

Tensions rose as speakers atop the mound called white people “criminals” who had occupied nearby Observatory and allied themselves with colonial settlers. An intention to lodge an appeal against the interdict was floated.

After a half-hour delay, the ceremony was reconvened on the opposite river bank. Referring to the interdict, Jenkins said, “We accept this victory very humbly because of the immense devastation that has already taken place.”

Construction is expected to be halted pending the outcome of an attempt to review or set aside decisions by the provincial government and the City of Cape Town giving the go-ahead to the development. Building has already taken place, with the infilling of the river and the construction of the outlines of a three-storey urban block.

Deputy Judge President Patricia Goliath on Saturday found that the consultation process had been “inadequate” as it did not involve all affected First Nations people, who she said had a “deep and sacred” link to the historic site.

Next:  Rape accused set free pending DNA tests, goes on to rape and murder a child

Previous:  New clinics built near Pretoria but years later they are still not open