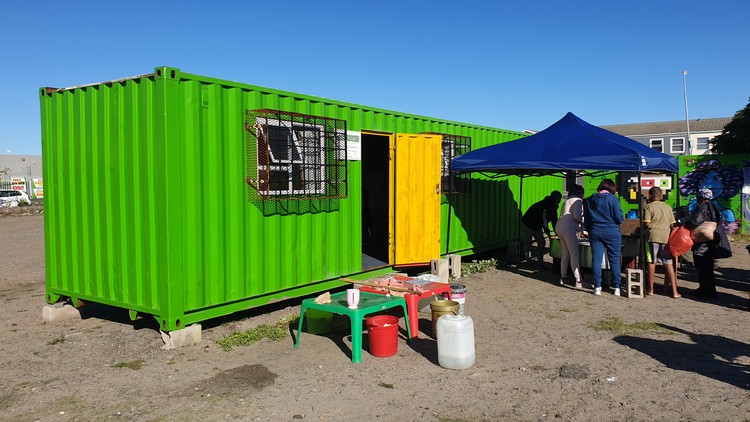 It’s 4pm on a Thursday afternoon in Hanover Park and a group of people clutching plastic containers has already begun lining up outside a brightly-coloured container for a meal. For many people in the queue, this is the only food they’ll eat that day.

According to census statistics from 2011, more than half the households in Hanover Park survive on a monthly income of R3,500 or less. The City of Cape Town has said that unemployment in the area is very high, particularly among people aged 18 to 35.

The Alcardo Andrews Foundation has been feeding families since 2016. But this could soon come to an end.

The foundation, formed in 2015 to honour Alcardo Andrews who lost his life in gang violence, has been at loggerheads with the City since 2019 when it moved its container to the field. “We have been trying to get permission from the City to use or lease the land to no avail. Instead we were subjected to harassment by officials and law enforcement,” said the foundation’s Lesley Wyngaard.

According to Wyngaard, they serve between 500 and 1,000 meals per day.

She explained that they initially fed people from church grounds in Hanover Park but this was quite a distance from founder Avril Andrew’s house, where the food was cooked and prepared. “We received the shipping container in November 2020, but before that we were operating from Avril’s house, which we still use as our main base for work,” said Wyngaard.

They then moved the container to the field across the road from Andrews’ house in February this year. The field, formerly known as a site of gang violence, has become a place where people now come together for food every day.

The foundation has been served two notices to remove the container by the City’s Law Enforcement Department.

“People are hungry and most of them are unemployed but have families to feed. This food also feeds neighbouring communities. And the need grows everyday, which is why we need this container here,” said Andrews. The foundation depends on donations and raises funds by selling second hand clothing with items less than R20 each.

Last week, a hearty rice and bean curry was served to people in the queue.

Some immediately sat in the shade under a tree and started eating, while others wrapped their containers in plastic bags to take home. “This field has been vacant for a long time and at times it was being used for gang activity. So we cleaned it up and occupied it so we could continue our work,” said Andrews.

The City confirmed that the foundation had applied in 2019 to the Recreation and Parks Department and had been told to approach the Property Management department.

Wyngaard said the foundation had done so immediately and followed up, without success. Then in March this year they had been told to send a more detailed motivation. This was received on 17 March and is awaiting internal comment, the City said.

Mayoral Committee Member for Safety and Security JP Smith said that the law enforcement department would not “take action” until the application had been processed.

Next:  Punch above the rest: Knysna matriculant fights to become professional boxer