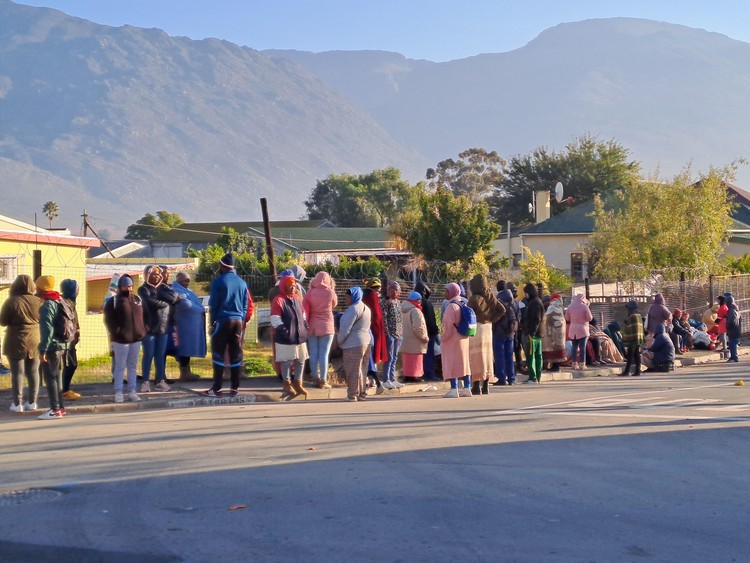 Queues of farm workers in search of their Unemployment Insurance Fund benefits snake around the block at the satellite Department of Labour office in De Doorns, near Worcester, in the Western Cape. Photo: Liezl Human

Bianca Jennike, a seasonal farm worker from De Doorns in the Western Cape, has been trying to collect her Unemployment Insurance Fund (UIF) payments for six months. She is one of scores of seasonal workers who queue from early in the morning at the satellite office of the Department of Labour in De Doorns, a small farming town about 30km outside Worcester.

Seasonal workers say they have been struggling for months to get their UIF payments for the period they do not work during the year. Many have resorted to sleeping outside the office, but even then they may still not be successful.

“When it’s closing time, people will continue queuing until the next day. But then they still may not be helped,” said Jennike.

GroundUp visited the office on Thursday morning. The queue for the office snaked around the building and only a few people at a time were let through the gate. At around 9.30am an official went outside to tell those queuing that the system had gone offline.

Jennike was queuing with her daughter, who is still breastfeeding. “I had to bring her with me and she also had to stand in the cold,” she said.

She had waited since 4am, and she had been there the day before too.

Her husband, Anthony Jennike, said that he was helping her queue. He said he had applied for his UIF in 2020 and had only received it more than a year later in September last year.

A few members from the Women on Farms Project (WFP) were picketing outside the office. Denile Samuel, Labour Rights Programme Coordinator at WFP, said in meetings with officials from the Labour Department in the past they had been told that more staff would be sent to “help with the bottleneck”.

Samuel said that some people had been queuing since April, when the season ended. “It’s August. The season is going to start in October. Still people don’t get any money,” she said.

Samuel said that the Labour Department officials are not “valuing the fact that people are standing here waiting for money that they worked for”.

Linda Xhalabile and Andiswa Tyhaliti both spent the night camped outside the office. They brought blankets and were huddled around a fire they made across the road to keep warm.

Tyhaliti, a seasonal worker in a packhouse, said that officials regularly come outside to tell them the systems have gone offline after they have waited hours in the queue. Xhalabile said she had been waiting to receive her UIF since May.

Sipho Rhiini said they had been told to go to the Worcester office but did not have the money for taxis. They currently pay R10 for a taxi to the De Doorns office.

Bettie Fortuin, a member of WFP and a De Doorns resident, said there were long queues outside the labour office every day. She said WFP had previously protested outside the offices but nothing had changed.

She also said that the Provincial Rapid Response team had been dispatched from 13 June until 30 July to help with the backlog of applications. The team had processed a total of 1,921 applications, she said.

“Unfortunately, the De Doorns office is a satellite office which does not have the capacity to service the high volumes of clients during the end-of-season period. Due to this, the provincial Rapid Response team supports the area during the peak seasons,” said Tloubatla.

She said employers who retrenched workers in large numbers should contact the department so the Rapid Response Teams could be sent onsite to process applications. This would help cut travelling costs for workers and reduce queues at the offices, Tloubatla said.

Next:  NUMSA: It’s Ruth Ntlokotse versus Irvin Jim in court

Previous:  COSATU protesters chase away officials during march against crime