School feeding: Auntie Dottie’s biryani is a hit with learners

But some learners are still not being fed in lockdown 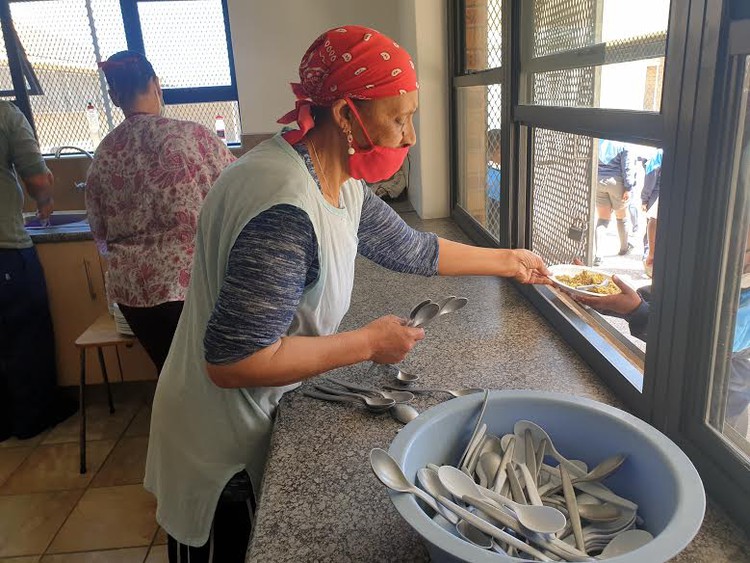 It’s 11:40am on Wednesday, the bell rings and it’s lunch time at Montevideo Primary School in Cape Town.

Teacher Cindy Foloti tells her Grade 1 learners that they can form a line and get ready to get food.

At the school kitchen, Dorothy Dymond, “Auntie Dottie” to learners and staff, opens the window, dishes up and prepares to hand over the plates to the primary school learners queueing outside the window.

Dymond has been the school cook since August last year, preparing meals for the learners in the school’s small container kitchen, as part of the Department of Basic Education’s National School Nutrition Programme. ”We are given a menu by the department, but I know how to cook and if I want to make the children something nice, then I make them something nice. Like yesterday, they had soup and they loved it.”

She starts at 6:40am to prepare porridge for the learners to eat at 8am. “I make them instant porridge, sometimes strawberry flavour or banana flavour, with a small box of milk. Lunch differs, yesterday I cooked soup and today it’s biryani,” says Dymond.

The school receives bags of soya, rice, samp, beans, mealie-meal, tins of pilchards, fresh fruits and vegetables, milk, oil, salt and biryani mix from the Department. The fresh produce is delivered weekly and the rest twice a term.

Dymond is paid by the school governing body.

Acting principal Craig Daniels says at present the school only feeds the 250 learners who are at school on any day. “We would like to increase that number,” he says. Learners are supposed to be fed whether or not they are at school, but last month the Department of Basic Education acknowledged that nationwide only 4.4 million learners out of the 9.7 million qualifying learners were being fed.

“We tried to do a community feeding programme during lockdown, but there were too many challenges,” says Daniels.

With their plates of biryani in their hands, a small group of boys and girls sits apart on the benches outside the school hall and starts eating.

Another group leaves with their plates to Foloti’s classroom, where they form a circle on the mat and start eating, with murmurs of approval.

“Our aim is to be able to feed every learner at school every day,” says Daniels. “The food from the department won’t always be enough, so we have two educators in charge of a vegetable garden. We want to be growing things to supplement our kitchen stock.

Some children have very little to eat outside the school, says Dymond. “I always ask my children to bring along a lunchbox or container, and when there is food left over, I dish up for them to take home. And as you can see, I have an extra dish here, for those who will want seconds or food for home,” says Dymond.

Next:  Human Rights Commission under fire for 7-month silence on sex worker death in custody

Previous:  Police accused of shooting pregnant woman in her own yard