SARS workers picket for salary increases ahead of nationwide strike

The tax collector says there’s no money to meet union demands but has since tabled a 1.4% increase 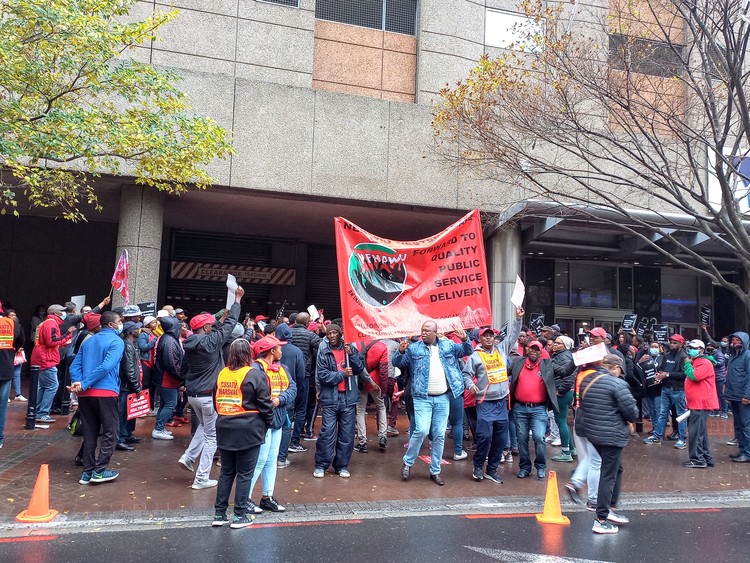 SARS workers, supported by NEHAWU and PSA members, picket outside the Cape Town office on Tuesday for salary increases ahead of the nationwide strike on Wednesday. Photo: Marecia Damons

More than 50 South African Revenue Service (SARS) workers and supporters braved the cold and rain to picket outside the tax collector’s offices in Cape Town on Tuesday. The workers, affiliated to the National Education Health and Allied Workers Union (NEHAWU) and Public Servants Association (PSA), are demanding an across the board wage increase of 7%.

The picket is a buildup to the planned nationwide strike on Wednesday. This comes as negotiations, which started in January, between union representatives and SARS deadlocked this week.

According to NEHAWU and PSA, SARS has since offered a 1.4% increase while the workers’ demand has dropped to 7%.

On Sunday, SARS said it met NEHAWU and PSA representatives on how to allocate available funding towards financial relief for employees and to resolve the dispute. SARS said its funding allocation from the National Treasury made no provision for salary increases. It will be forced to use funds from its savings to meet workers’ demands.

Following negotiations on Tuesday morning, Mali said SARS offered to use the R430 million to give salary increases on a sliding scale based on their performance. “If the employer were to just give a reasonable percentage, we will reach an understanding because we are not greedy,” he said.

Aileen Mosetic, acting provincial manager for PSA in the Western Cape said SARS “waited until we were on the verge of a strike before they came with a settlement, which isn’t a good offer. If you take inflation into consideration, that 1.4% is not going to cut it”.

Mosetic said they still needed to present the offer of 1.4% to the workers and will then decide on whether to proceed with the mass strike.

In response to other demands raised by the unions, SARS said it is continuing to negotiate with representatives “and has made an offer, which is still under their consideration”. SARS said it will only respond in detail once the labour discussions have been resolved.

Previous:  Appointment of Lottery chair back on track