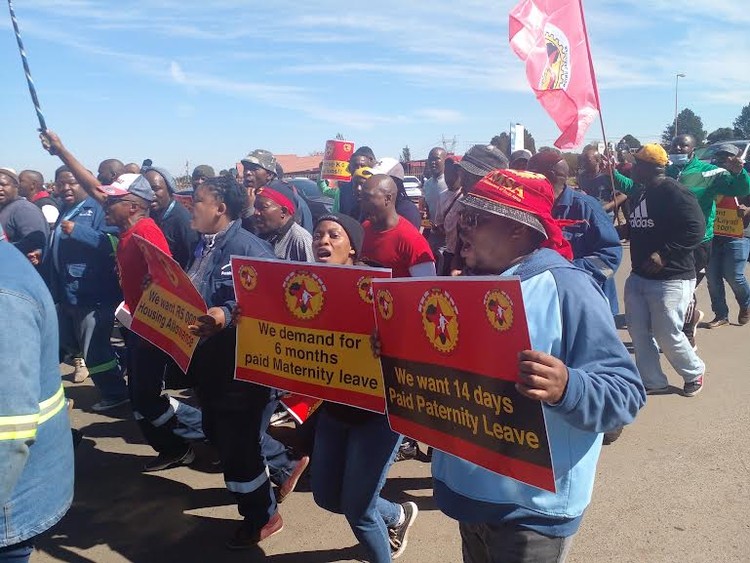 Striking ArcelorMittal workers marched to the company headquarters on Tuesday with a memorandum of demands. Photo: Chris Gilili

Several hundred members of the National Union of Metalworkers of South Africa (NUMSA) who have been on strike at steel company ArcelorMittal marched to table a memo of demands at the company’s head offices in Vanderbijlpark, Gauteng, on Tuesday.

Many of the workers have been on strike since 11 May, when they downed tools demanding a 10% wage hike across the board.

Early in the strike, the company obtained an interim interdict preventing workers in blast furnaces, coke batteries and the steel plant from striking, on the grounds that these are essential services, while other workers continued with the strike. But on 19 May, the Labour Court decided not to grant the final interdict.

ArcelorMittal said the strike had been marred by “numerous acts of violence and intimidation of non-striking employees, despite the strike and picketing rules agreed between the company and the union”. The company said one employee had been shot and several had been assaulted. The statement said the Labour Court had granted an interdict on Friday against violence and intimidation.

NUMSA regional secretary Kabelo Ramokhathali said workers had not had a meaningful increase since 2019. He said ArcelorMittal should come back to the negotiation table. The company had performed well because of sacrifices made by workers, Ramokhathali said. “Their refusal to give back to employees who made their success possible is a sign of extreme selfishness and rampant greed.”

ArcelorMittal spokesperson Thami Didiza received the memo and told workers he would pass it on to management. Didiza promised a response by Wednesday morning. He said the company was still holding talks with a commissioner from the Commission for Conciliation, Mediation and Arbitration.

Next:  Teen losing hope of finding a place in high school