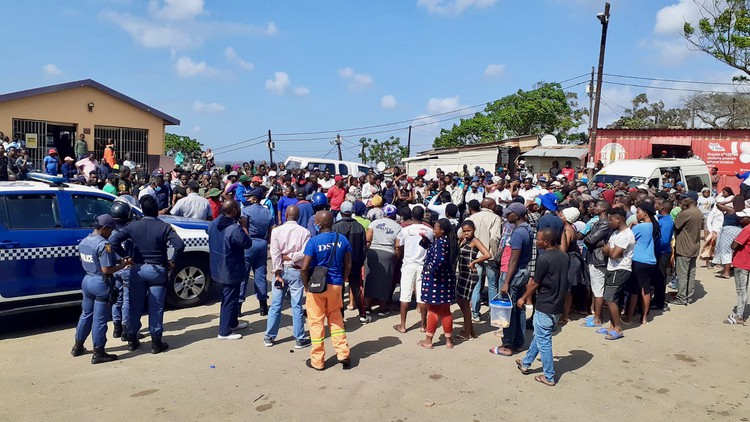 The protest follows the demolition of two shacks at Sim Place settlement on Thursday afternoon in a combined operation by the Calvin Family Group and the City’s Land Invasion Unit.

Sim Place community leader Sakhile Thabethe said, “Residents tried to stop them and the councillor and police came. That is the reason why we decided to embark on a protest this morning among other issues because as shack dwellers we are tired of the conditions we live under.”

Residents from many of the informal settlements in ward 34, including Mathambo, Mandeni, Thandanani, Siyathuthuka, and Johana Road, participated.

“We want … all residents to be treated equally – informal and formal residents. The protest should not come as a surprise because we want something that we have always wanted – development and equal employment opportunities,” he said.

Residents are demanding that government investigate corruption and that the current ward leadership be dissolved.

The shack dwellers also want an end to intimidation and assault during demolitions.

“Our properties are destroyed during these demolitions; people get assaulted; the use of force must end. We are human beings too,” said Benniett.

The protesters gave the municipality 14 days to respond to their grievances.

Ward 34 councillor Dr Bobby Maharajh accepted the memorandum and said he will pass it on to eThekwini Mayor Mxolisi Kaunda.

Maharajh said he will call a meeting when he has the answers. “I have on a number of occasions called the water and sanitation department to unblock the drains but it keeps happening over and over again. People cannot be living in these conditions,” he said.

EThekwini Municipality spokesperson Msawakhe Mayisela said the City has a responsibility to clamp down on land grabs, but it did not demolish shacks that are occupied, only those partially built or being built.

“The City would like to appeal to all its residents to refrain from embarking on violence and delivery protests as this is neither helping the City nor the residents. We urge our residents to make it a norm that in the event they have anything they are disgruntled about, to resort to dialogue,” said Mayisela.

KwaZulu Natal Police spokesperson Captain Nqobile Gwala said, “They were blockading the road with burning tyres and rubble. The community have dispersed and the road is being cleared.”