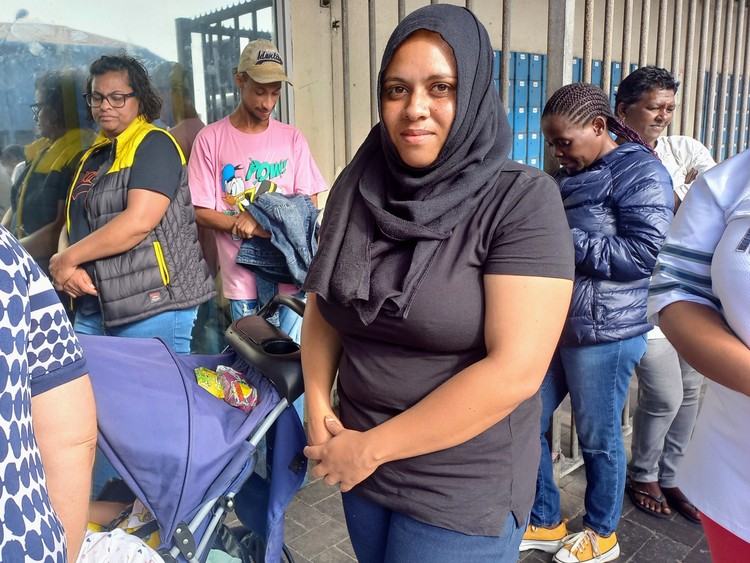 Sadiyah Manuel was in line outside the Post Office in Athlone, Cape Town for the third time on Tuesday to find out why she has not been able to access her children’s grants for January. Photos: Marecia Damons

A Cape Town mother spent hours queuing outside the Post Office in Athlone this week, desperate to collect her child’s unpaid social grant.

“November was the last time I received a SASSA grant for my child,” Angelina Stuurman told GroundUp while she waited in line with dozens of other beneficiaries who had also not received their money for January 2023.

In a circular, the South African Social Security Agency (SASSA) stated that all grants were to be paid by Thursday, 5 January. But on Friday, Postbank, in a statement, acknowledged that its payment system had suffered yet another “glitch” which meant many people could not access their grants.

Postbank spokesperson Bongani Diako explained that the system became “unstable” on Friday morning. This caused social grant beneficiaries who use the SASSA/Postbank gold card to experience “challenges when doing transactions”. Diako said that the issue had been resolved by Friday midday.

However, when GroundUp visited the Athlone SASSA and Post Office branches on Tuesday, we spoke to many beneficiaries who had still not received their much-needed grants.

Among them was Stuurman. She said her son’s last child support grant payment was in November and even that was paid late. She is yet to receive the grant for December and January. Tuesday was the third time she had visited the office to ask why the grant had not been paid.

“I first came in December, and they said they were going to sort it out. They made a copy of my SASSA card and ID but still nothing. Now I’m standing here again because SASSA sent me here to sort out the payment issue,” she said.

Stuurman is currently unemployed and relies on the grant money to buy school supplies for her seven-year-old who starts at a new school on Monday. “Parents are really dependent on this money. How are they supposed to live? The past two months have been difficult for us,” she said.

By the end of the day she had been paid. 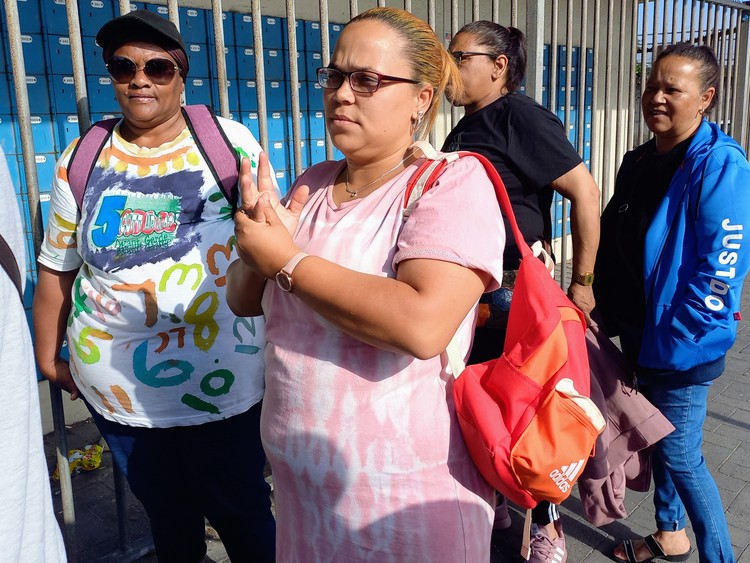 Yolanda Lawrence (left) and Angelina Stuurman (right) were among dozens of grant beneficiaries waiting outside the Athlone Post Office on Tuesday.

Stuurman was with her mother-in-law Yolanda Lawrence who had not yet received her disability grant this month. “I can’t pay my debts or anything. I’ve had to tell everyone that I borrowed money from, that I didn’t receive my grant yet.”

Lawrence has been receiving the grant since 2015 and said she has never had any payment issues until now.

Further down the queue was Sadiyah Manuel with her children aged one and six. This was her third attempt at the office to get their child support grants.

“We came to the Post Office last week and they said there was no money,” said Manuel. When she returned on Monday morning at 6am, she said the line was snaking around the building. “There were almost 100 people already waiting.”

“My daughter has to start grade R but there’s no money for stationery. Most of us are unemployed, that’s why we rely on these grants,” said Manuel.

This is not the first payment glitch at Postbank. Last month, millions of beneficiaries who use Postbank/SASSA gold cards were unable to withdraw their social grants from ATMs. At the time, SASSA said that this followed attacks and fraud on the payment network by criminals.

Diako said about 4,450 people had been affected by the glitch on Friday. He said the problem should have been fixed by now.

“Postbank sincerely apologises for the impact this has had on the limited number of beneficiaries this time around.”

Previous:  Rubbish hasn’t been collected for weeks in parts of Gqeberha