Pigs swim in the sewage outside my house, says protester 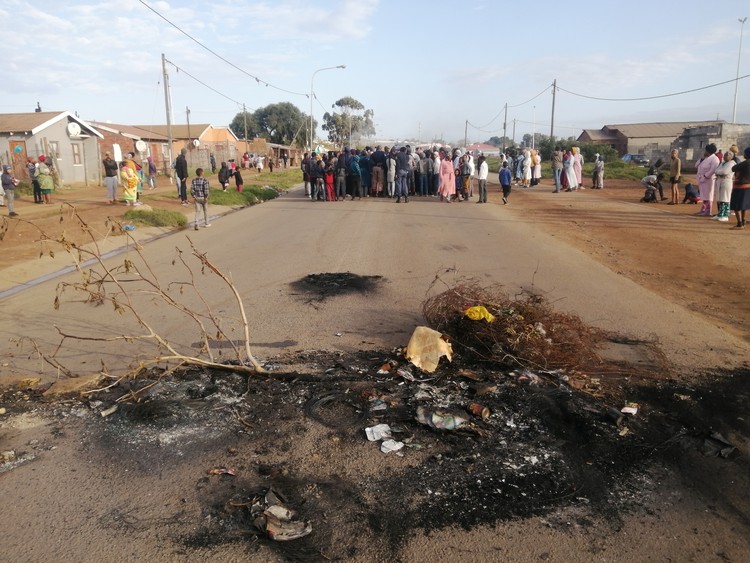 Shack dwellers and homeowners from Kleinskool in Gqeberha blocked the Old Uitenhage Road on Wednesday to demand electricity, houses and that blocked drains in the area be fixed permanently. Photos: Mkhuseli Sizani

About 300 shack dwellers and homeowners from Kleinskool in Gqeberha blocked the Old Uitenhage Road on Wednesday, demanding that the council improve their living conditions. They want shacks to get electricity, blocked drains to be cleaned and RDP houses to be built.

They blocked the road with burning tyres, rocks and tree branches before sunrise on Wednesday.

Mina Nappies said, “Every day pigs swim in this sewage and rub their bodies against my RDP. When it’s time to eat, I feel like vomiting because the sewage smell is all over the place.”

She said a drain outside her house has intermittently been blocked for almost five years. “Sewage has spread all over mine and my neighbour’s yard,” she said.

Nappies said the walls of her RDP house are crumbling and her furniture is mouldy because the floor is always wet with sewage water. “I have reported this problem to the municipal customer care line several times. All I get is a reference number with a promise that workers would come and fix it. But nothing is done.”

Mzwabantu Katase, a representative of the shack dwellers, said about 100 people share one communal tap in the settlement. “In 2017 we were promised that our shacks would be electrified, but nothing has been done. Our area is 20 years old. We want to know when we will get RDP houses.” 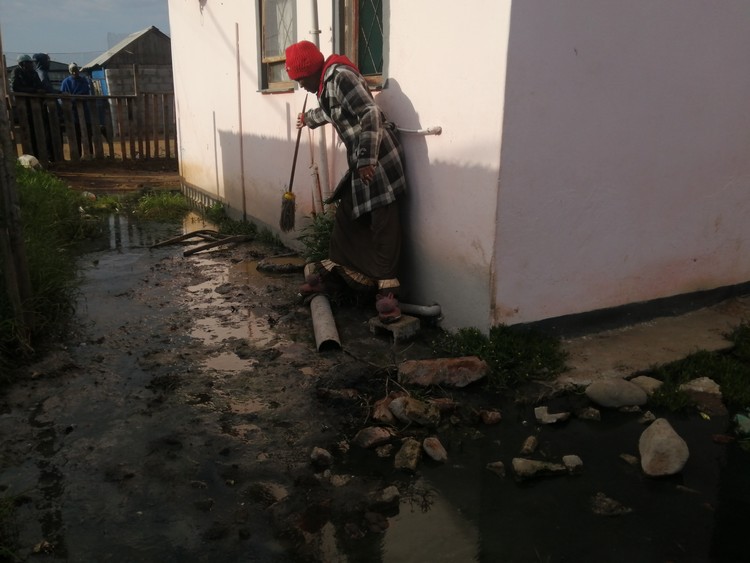 Resident Mina Nappies tries to unblock the drain outside her house with a mop because she says the municipality has not fixed it in two years.

The residents accused Ward Councillor Tyrone Adams (DA) of neglecting their plight since he took office in 2021.

At the protest, Noluthando Puba, a community leader, told Adams, “We live in pigsty conditions because you don’t care. Our homes and streets are flooded with sewage. Rubbish is piling up in the streets because it is not collected. We experience electricity outages because the shack dwellers connect from our RDPs’ electricity poles,” she said.

Adams told protesters that the Nelson Mandela Bay Municipality was responsible. “The municipal administration is not serious about service delivery,” he said.

“For two to three weeks, municipal trucks have had no fuel because the service provider has not been paid. There is also no political seriousness to address these issues. I will call a meeting with the community soon,” he said.

Mthubanzi Mniki, the municipal spokesperson, denied Adams’ claim that the administration is not serious about service delivery. Mniki said that during a mayoral committee meeting on Wednesday “the mayor requested development plans and strategies from all the executive directors. Housing, electricity, water and sanitation issues were thoroughly discussed”.

He said the City has serious challenges with vandalism, which result in drain blockages. “People throw dead animals, rocks and tyres inside our drains,” he said.

Mniki confirmed that there had been “supply chain contractual challenges” with the contractor that supplies fuel to municipal trucks, but said the matter has been resolved.

This article was updated at 11:55am to include the municipal spokesperson's response.

Next:  NUMSA office-bearer “election” goes ahead despite interdict

People queue all night to get their chronic medication